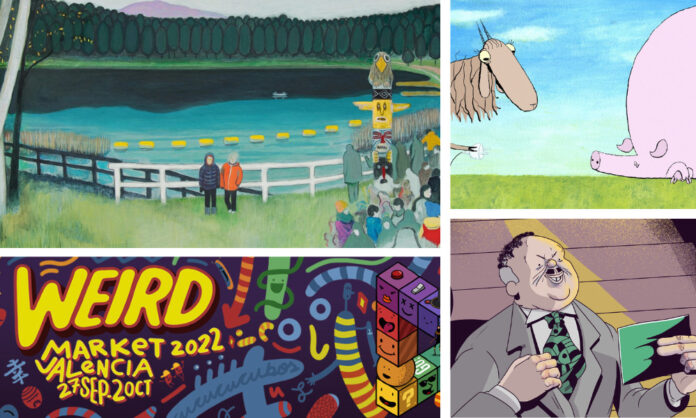 The 14th edition of Spain’s animation, video games and new media confab Weird Market (weirdmarket.es), held this year in Valencia for the first time, wrapped up this weekend with the unveiling of the winning films of the WFest shorts competition. A variety of techniques and narrative themes were represented in the winners, who were awarded trophies designed by local artist SAM.

In the European Short Film competition, the top award wen to Pig by Dutch animator Jorn Leeuwerink. Produced at by Amsterdam’s Studio Pupil, the 2D short playfully comments on the climate crisis with a tragicomic, picture-book style fable about a group of animals become increasingly dependent on the power they get plugging into one sleeping pig’s socket-like snout.

The National Short Film award went to Genís Rigol’s He Ran Towards His Comrade, which made its international premiere at the festival after being awarded Weird Market’s Movistar+ Short Film Project prize last year. The film centers on a businessman greedy for popularity, who will go to any lengths to cause problems only he can solve.

A Special Mention was also awarded to The Record by Jonathan Laskar (Swtizerland).

Audience Awards went to, in the National competition, Good Night Mr. Ted by Nicolás Sole — which reframes the classic noir police drama with a teddy bear in the lead role — and, in the International competition, Sprite Fight by Matthew Luhn (The Netherlands) — a horror-comedy created in Blender by a former Pixar artists whose credits include the Toy Story movies, Monsters, Inc. and Ratatouille.

On the forward-looking end of the Weird Market, the most outstanding projects in development across 170 selections (feature films, shorts, series, video games, transmedia projects, comics and more) are also recognized with special awards.

The 2022 Movistar Plus+ Short Film Project Award went to Buffet Paraíso by Héctor Zafra, an animator who makes his directorial debut after on the teams behind titles such as Mum’s the Word by Khris Cembe and the Goya-winning feature Birdboy: The Forgotten Children by Alberto Vázquez and Pedro Rivero. The award includes acquisition of broadcasting rights to the short by Movistar Plus+ and 9,000 euros for a period of two years (unlimited number of screenings, exclusive to Movistar Plus+ for the first year). In addition, the work will be officially premiered at the 2023 or 2024 edition of Weird Market.

The Spanish Screenings Anímate Award was bestowed on locally produced series Brian the Brain by Tomás Peña (of Barcelona’s BLISS studio). The show is adapted from the comic by Miguel Ángel Martín about a boy with a brain with telepathic and telekinetic powers who must navigate growing up and his life as a laboratory guinea pig.

This award was announced last September during the San Sebastian Festival, Spanish Screenings On Tour, the debut of new awards created in collaboration with leading markets in Spain. In collaboration with Weird Market, the Spanish Screenings Animated Award includes the winner’s participation at Animation! Ventana Sur and the #SpanishScreeningsOnTour activities in this prestigious Latin American market, determined by the project’s co-production potential with the region.

The award for the best series project from a young creator went to Manolitos by Diego Porral and Joaquín Garralda (Spain), granting the up and comers free professional accreditation to the next edition of Annecy’s MIFA market. The filmmaking duo previously created the 2021 festival favorite Leopoldo from the Bar.