***This article originally appeared in the November ’22 issue of Animation Magazine (No. 324)***

When Adam Yaniv, the talented creator of the new animated series Summer Memories, was a young boy growing up in Israel, he and his best friend used to make movies with the other kids in their neighborhood, publish their own comics and perform songs together. “We had a creative language, a humor and an outlook that made my childhood happier and formed the basis for who I am,” Yaniv tells us in a recent interview. “I wanted to capture that essence in the show and deliver on the promises my best friend and I made to each other — right down to our company producing this show!”

Yaniv’s memories were the basis for a well-received 2015 short for Nickelodeon Animated Shorts Program. “I was intrigued by the idea of doing a diary show with an unreliable narrator at the center of it, and playing with people’s points of view,” says the animation veteran, whose credits include Alvinnnn!!! and the Chipmunks series (as supervising producer) and four Alvin and the Chipmunks movies, Hop and Night at the Museum (as animation supervisor). “We acquired the rights back from Nickelodeon, and my company, A&N Productions, teamed up with exec producers Irene Weibel and Paul B. Cummings, Aircraft Pictures’ Anthony Leo and Andrew Rosen and Yeti Farm Creative. We then made a pilot animatic from my living room, and WildBrain picked up the international distribution rights for the series.”

Over 200 people worked on the show globally. “In Israel we had our background design, ink and paint at The Hive Studio in Jerusalem,” says Yaniv. “Design, animation and our board director Mike West were in Kelowna at Yeti Farm Creative, while the writers and actors were based in Toronto, and I was showrunning and recording voices and music from my closet!”

The show was animated in Toon Boom Harmony with help from After Effects and Photoshop. “The lion’s share of character animation was produced in Kelowna at Yeti Farm Creative, while additional animation, ink and paint were done in Israel, where we also edited our initial animatics,” according to the show creator.

One of the biggest challenges for Yaniv was maintaining a visual and verbal style all the way from the series bible to the animatics and preserving a handmade feel in the design and animation approach. “We also have a specific arc with tentpole moments, supported by the songs which act like a character growing and changing alongside our main character,” he notes. “Given the tight budget and schedule, we had to be precise with where we put our resources.”

Summer Memories explores the many ways Jason’s summer was so pivotal and what makes the friendship of these kids unique. “There is a soulfulness and a grandiosity to the story and how it bounces through time and space that I think people will really get into and be touched by on an emotional level,” says Yaniv.

Back to the Old Neighborhood 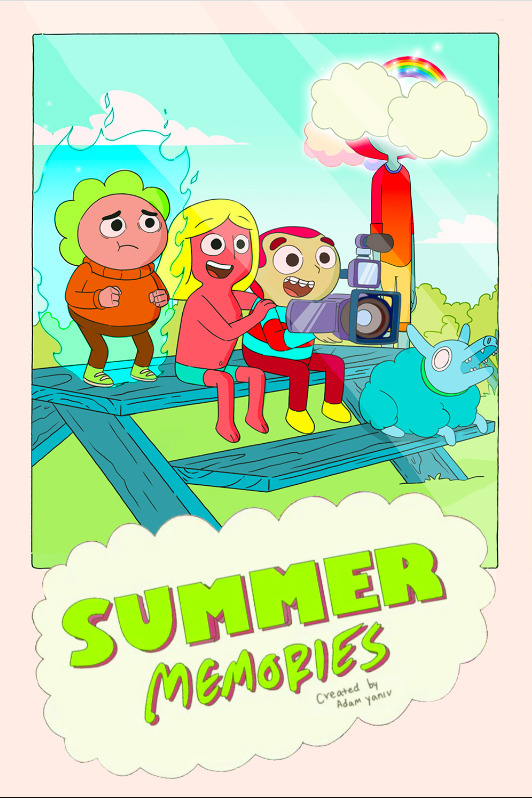 One of the remarkable aspects of the show is how it switches effortlessly between the real and the surreal. “Starting with the characters, the focus was on capturing the more flat and whimsical elements of my aesthetic and making them three-dimensional,” explains Yaniv. “To further establish a reality and diary feel, we kept camera lenses truer to life, scale a bit more filmic, while staying cartoony and playing with the medium. The world also switches between points–of-view, so setting it in a distinct neighborhood was important. We actually used the neighborhood that I grew up in as a reference point for shapes, colors and design elements. It was also personally important to keep it universal as opposed to the standard North American look of animated shows.”

Yaniv believes the beauty of the show is that it inspires multiple points-of-view. “We like to joke that no matter which character you love, they will disappoint you at some point,” he says. “We obviously love our characters, but it’s precisely because they get stuff wrong, like judge each other and jump to conclusions, as we all do — and that’s such a big part of the show’s DNA that a lot of the fun of watching comes from never quite knowing if you’ve seen the whole story. The biggest takeaway is something important in my culture — that ultimately we are all a little silly, all one big family and we need each other to survive!”