***This article originally appeared in the December ’22 issue of Animation Magazine (No. 325)***

As The Jungle Book’s fun-loving sloth bear Baloo wisely proclaims in the film’s catchy Terry Gilkyson tune, “the bare necessities of life will come to you.” And besides plucking a pawpaw or prickly pear for an exotic snack, that also holds true for a must-see exhibition and new companion art book fortuitously timed for the 55th birthday of Disney’s 1967 animated classic.

Organized, designed and curated by acclaimed animator and Disney Legend Andreas Deja, this anniversary salute to The Jungle Book opened in June at The Walt Disney Family Museum in San Francisco. The film holds a special place in Deja’s heart since a boyhood screening became the colorful catalyst that inspired him to become one of our generation’s most honored animators. His distinguished work on major features includes The Little Mermaid’s King Triton, Beauty and the Beast’s Gaston, Aladdin’s Jafar, The Lion King’s Scar and many more.

To coincide with the ongoing exhibition, Walt Disney’s The Jungle Book: Making a Masterpiece is a 192-page hardcover written by Deja which arrives this month from Weldon Owen. It offers an eye-pleasing treasure of original animation cels, animation drawings, character sketches, unseen memorabilia, archival letters and rare concept art. Many of these pieces have never been revealed to the public outside the current event at The Walt Disney Family Museum.

“The Jungle Book was the first Disney animated film I ever saw,” Deja tells Animation Magazine. “I was 10 or 11, and me and a school buddy went to see it. I’m not overstating it, but it literally changed my life. I came out of the theater and my head was spinning. I couldn’t believe what I saw. Obviously these were drawings but they moved and they were also real characters with real feelings and they interacted.”

The Jungle Book was adapted from Rudyard Kipling’s adventure stories of 1894/1895 and holds the distinction of being the final animated film personally overseen by Walt Disney before his death in December of 1966. It still holds a hallowed spot in the Disney catalog with its verdant backgrounds, charismatic characters, stellar voice cast and life-affirming songs.

Kipling’s 19th century source books had a distinctly dark tone that Walt Disney felt was inappropriate for a family-friendly animated film in the truest Disney tradition. This required a bit of lightening up of the story that caused controversy with Disney’s main story architect, Bill Peet, the man who first suggested The Jungle Book as a promising project.

“Bill Peet was the one who single-handedly storyboarded all of 101 Dalmatians,” explains Deja. “So Bill started storyboarding his heart out for The Jungle Book and during those first meetings Walt thought it was too dark and that it wasn’t ‘Disney.’ He wanted to have fun with the animal characters. There was some back and forth, and Bill didn’t see it that way and he left the studio to concentrate on his children’s books. Walt got really involved because he had a certain vision of who the characters were, and there were extensive talks with the animators. Baloo was an important character to him and, when Walt saw what Ollie Johnston had done with him, he asked for Baloo to be developed more as a tutor to Mowgli.”

Walt Disney was famously hands-on with The Jungle Book and his purity of vision for the project allowed for a synthesis of art and story that provided an artistic compass for animators. There in the depths of that lush Indian jungle Walt discovered nature’s playfulness and danger.

“I recall Ollie Johnston telling me of a hallway meeting he had with Walt about how the bear should move,” says Deja. “Walt would actually do these funny dance moves in the hallway to show him how he saw it. Ollie Johnston observed that and kept it that way. Even one of Walt’s grandsons, who I gave a tour of the exhibition to a few weeks ago, asked me how much his grandpa saw of the final film. From all the accounts that I know, he pretty much saw all of the animation.”

Apparently Walt Disney had specific ideas about the backgrounds, because he was not a fan of the backgrounds in The Sword in the Stone, which was not a box office hit the first time around. “He wanted a lighter jungle to elevate the mood and atmosphere, and that’s why The Jungle Book backgrounds look the way they do,” says Deja. “It’s almost a little bit of a throwback to the ‘50s where the backgrounds don’t have any Xerox lines and are not graphic, but they are very moody.”

One curious fact about The Jungle Book is that it remains the most-viewed movie of all time in Germany. Deja recalls a conversation with a German journalist years ago discussing why The Jungle Book was so spectacularly popular in that country where Deja grew up. “The Germans just embraced it — and I remember as a kid trying to see it again and you couldn’t buy a ticket, it was sold out all the time,” he recalls. “It was a cultural phenomenon. That journalist told me one of the reasons why he liked watching it over and over is because for almost an hour and a half, you’re in the jungle. He didn’t see it from a character point of view, but the environment was so beautiful and so nice to be in.”

To compose this impressive coffee-table edition, Deja used the exhibition text as a springboard and boiled it down to make it work for the book format. Some of the more intriguing items Deja discovered were documents from the Walt Disney Archives, specifically correspondence for a work-in-progress screening of King Louie sequence.

“It was incredible how poignant and specific Walt was with his notes and criticism. He said he liked the animation of King Louie that Frank Thomas and Milt Kahl had done, but he said the way that King Louie was drawn, you couldn’t see the eyes. So he asked them to open up the eye units and, while they were at it, put some hair on the top of his head.”

In the director’s chair for The Jungle Book was one of Disney’s fabled Nine Old Men, Wolfgang Reitherman, who also helmed The Sword in the Stone, The Aristocats and Robin Hood. According to Deja, “Woolie” understood Walt’s overarching vision for strong characters, the emphasis on interactions between those animal characters and the fun that could be had.

“It’s unique in that the animators had so much time and room to develop these characters and let the audience get to know the snake and the elephants and how they interact with Mowgli and the other animals,” Deja says. “I think you get to know The Jungle Book characters more than any other Disney film. They all loved working on the film. Milt Kahl called it the last Disney classic. The Jungle Book for him was a highlight, and he would credit that to Walt’s participation.”

When pressed to choose a cherished scene or character from The Jungle Book, Deja struggles slightly to pick a favorite. “I’m really crazy about Shere Khan, even though he comes in very late in the film,” he admits. “I also love the sequence between the tiger and Kaa under the tree. Shere Khan is interrogating Kaa about the whereabouts of Mowgli and he does it with such an above-it-all attitude. The vocal cast was outstanding and the animation was very withheld. The Jungle Book is a masterpiece in animation, graphic design and art.” 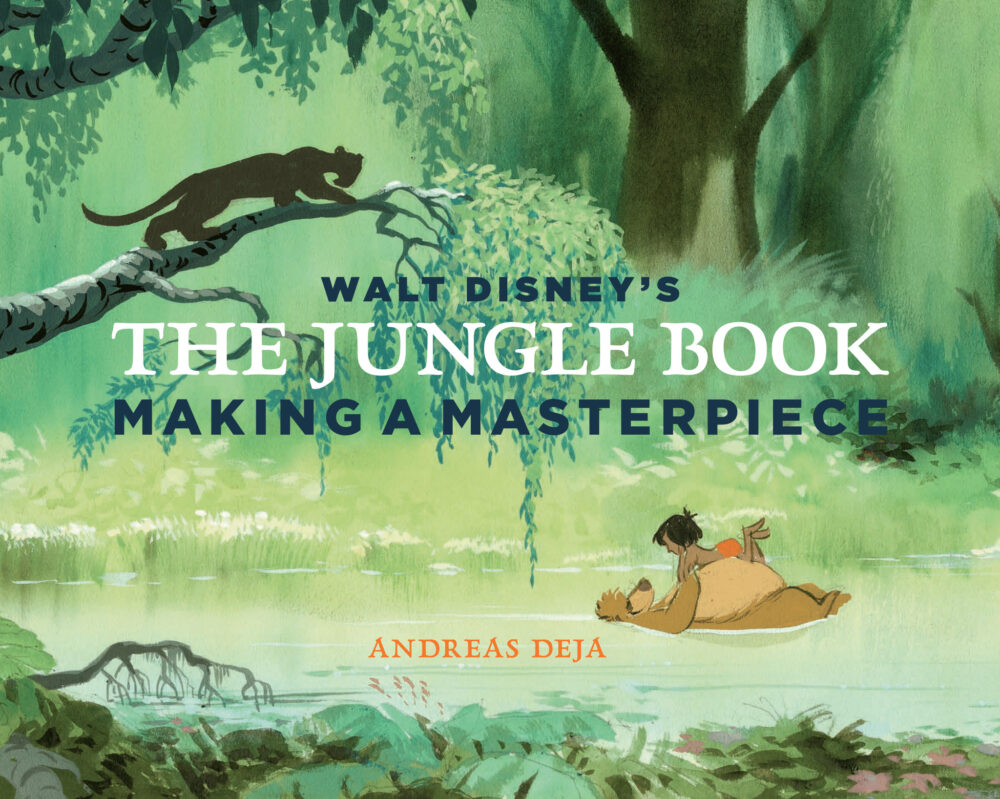 The special retrospective for The Jungle Book at The Walt Disney Family Museum showcasing over 300 rare artworks and ephemera will be on display through Sunday, January 8, 2023.