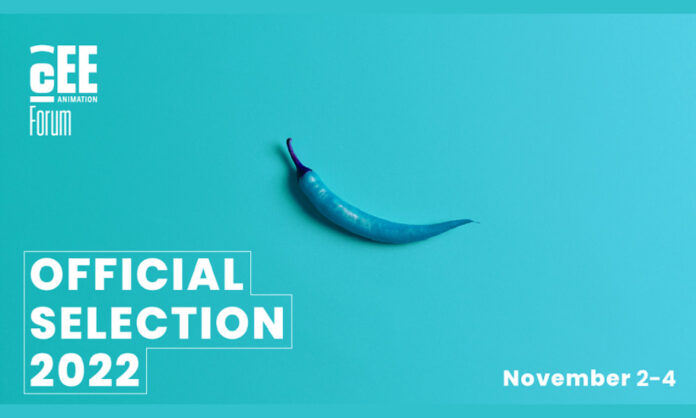 This includes 33 projects being presented in competition, selected from nearly 130 applications from 34 countries, representing a variety of new voices and established auteurs. Among the countries with the largest presence are France (seven projects), Hungary, Czech Republic, Poland (five), followed by Germany (four), Slovakia (three), Slovenia (two), and one project each from Austria, Bulgaria, Italy, Lithuania, Netherlands, Norway, Portugal, Romania and Serbia.

Increasing gender equity in the industry is also reflected by a high number of female directors, with a ratio of 24:15, particularly noticeable in the short films category. When it comes to technique, the creators have opted for or combined drawing (16), 2D (16), stop motion (11), 3D (six), cut out (four) and, exceptionally, collage, pixilation or rotoscoping.

Another important part of the program is an audience with representatives from national broadcasters and accompanying discussion panel. CEEAF also serves as a gateway for young film professionals. European universities regularly send envoys to showcase their talent pool of current animation students. Plus, accredited guests will be able to check out a selection of non-competing projects — the selection of the CEE Animation Workshop 2022 and animated works given the seal of approval at partner events such as AnimatekaPRO, Animarkt, Animest, Kids Kino Industry and one student project from Ladislav Sutnar Faculty of Design and Art – University of West Bohemia in Plzeň.

The 2022 event will take place in hybrid form; accredited guests may participate either in person in Plzeň or online. The organizers have also joined forces with another industry event, the Animarkt Stop Motion Forum (Nov. 5-8 in Łódź, Poland) and are offering an advantageously priced joint accreditation to both events.

“Working together gives a great opportunity to reach many more people working in the animation industry, allows us to share experience and integrate the animation industries. We are convinced that this is just the beginning of our cooperation,” added Agnieszka Kowalewska-Skowron, from MOMAKIN, the Head of the Animarkt Stop Motion Forum.

Accreditation is now open at ceeanimation.eu.

The selected projects are as follows; additional details can be found here.

The Girl Who Wasn’t Afraid of the Bear
D: Darya Sidorova
P: Film and Television Faculty of the Academy of Performing Arts (Slovakia)
T: drawing