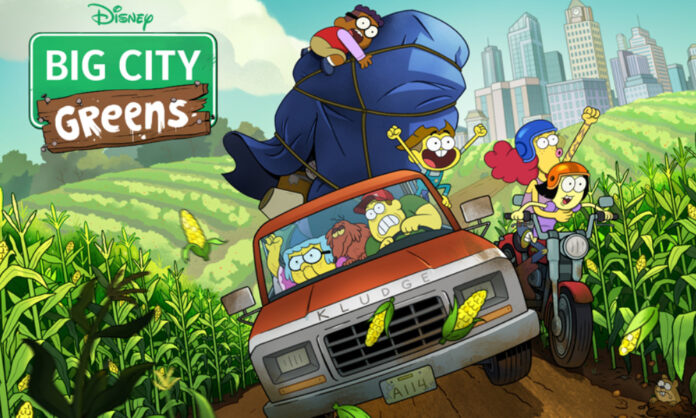 Kids and families all over the world have had to adapt to a lot of changes over the last couple years, so it makes perfect sense for one of their favorite cartoon clans to also make big moves, as we saw in the recent mid-season premiere of Disney Channel’s Big City Greens. Created by brothers Chris and Shane Houghton and inspired by their own experiences leaving their rural childhoods behind for the big city, the show centers on optimistic mischief-maker Cricket Green, his hard-working father Bill, sweet-and-sour Gramma Alice and quirky older sister Tilly as they try to adjust to urban life.

With the Greens making major changes in Season 3 and preparing for both a fourth season and an original movie-musical, it was the perfect time for us to catch up with series creator, executive producer and voice of Cricket, Chris Houghton, who shared some of his favorite experiences making the hit show and teased us mercilessly about what’s next for Cricket and co.

Animation Magazine: How does it feel to be part of Disney Channel’s ‘Four Season Club’ alongside the likes of Kim Possible and Phineas and Ferb?

Chris Houghton: It’s an honor! It’s an exclusive club that even has its own secret handshake. We’d show you, but Dan Povenmire would have our heads.

How have the past several years working on the show shaped you and Shane as artists and storytellers?

Becoming a showrunner and then becoming lucky enough to stay showrunners for so long has certainly squashed and stretched us in many ways. We’ve grown creatively, but becoming great team-leaders has probably been the most challenging (and rewarding) part of the job.

What’s the biggest lesson you have learned about creating an animated series?

It’s a team sport. Animation isn’t made by one or two people, even on a creator-driven series. It takes a massive team of like-minded, hard-working, passionate people to come together under the mission statement of, “let’s make something great together that we could never make by ourselves.”

As for how the show and its characters have grown over three seasons — which developments are you most proud of?

Season 3 of Big City Greens was our most ambitious season yet. It was greenlit during the first month of COVID and produced almost entirely from home. In addition, we decided to move the Green family from the city back to the country, which was a massive creative undertaking. We basically re-launched the show and we couldn’t be more proud of our crew and the episodes we created together. We think fans will really enjoy the rest of Season 3 and how it sets up Season 4.

Do you have a favorite fan encounter story? What was the moment you realized, “Wow, we made a hit!?”

Oh, there have been so many surreal moments. The first time we saw a fan’s tattoo of Cricket was a wild milestone to witness. We also have had the honor of fulfilling the wishes of a couple of Make-A-Wish kids.

I was once walking my dog and stopped to chat with an old woman on the sidewalk who was also walking her dog. She mentioned my voice sounded familiar and when I said I do the voice of Cricket, she started screaming and grabbed me by the arm and led me to her house to meet her grandkids. [Laughs] It was an interesting way to start a Tuesday morning.

When you started out on Big City Greens, did you and your brother envision running for four seasons (or more)?

When Big City Greens first started, the two of us really had to believe in the show and believe that we could turn it into something successful. Anything “new” in Hollywood is also untested, so those early days were truly fueled by our passion and vision that BCG could be great. We knew that even if BCG only got one season, we wanted to leave with our heads held high, knowing that we did our best.

But, now that Big City Greens is a big success, it’s a bit surreal. Like, wow, it actually worked! It’s an exciting and humbling experience and we’re very thankful for the crew’s hard work, the support from Disney and, ultimately, our passionate fanbase.

What is the biggest challenge of keeping up a fan-favorite toon? Where do you find fresh inspiration?

Oh wow, there are so many challenges. Communicating your vision, prioritizing what’s important, creating efficiencies, directing people, hiring and retaining good talent — the list goes on and on.

But, we keep things fresh by always trying to creatively challenge ourselves. Once something is successful, there’s pressure to repeat yourselves and to not “break” the successful thing. That’s fear-based! To combat this, we always try to put ourselves in creative situations that feel just a bit outside of what we can pull off. This keeps the job fresh for us and we believe the audience can feel that.

Time to spill the beans: What can fans look forward to in Season 4?

Cricket spills a bucket of beans and spends the rest of the season trying to pick them up!

We can’t say too much because some of the “big stuff” in Season 4 is based off of what happens in the rest of Season 3. We can say this: We have a couple of exciting new characters join the show and we’re taking some very big swings that we think the audience is going to love. Season 4 is shaping up to be a ton of fun.

And how is the Big City Greens musical movie coming along?

[Singing] Wooondeerfullllllyyyyyy! Producing a Big City Greens movie has been a dream come true. One of our long-time BCG series directors, Anna O’Brian is directing the film (another BCG veteran, Ariel Vracin-Harrell is the assistant director) and it has been so exciting to tell a big story that we could never tell in the series. We can’t wait to share more…

Are you working on any other projects in the BCG universe (or beyond) in the near future?

We certainly have some exciting ideas and upcoming plans … but you’ll have to wait and see!

Season 3 of Big City Greens is currently airing new episodes Saturdays at 9:30 a.m. on Disney Channel. Seasons 1 & 2 are available to stream on Disney+, and fans can also see more of their favorite characters in the Disney Channel short-form series Broken Karaoke and Random Rings on the network’s YouTube channel.