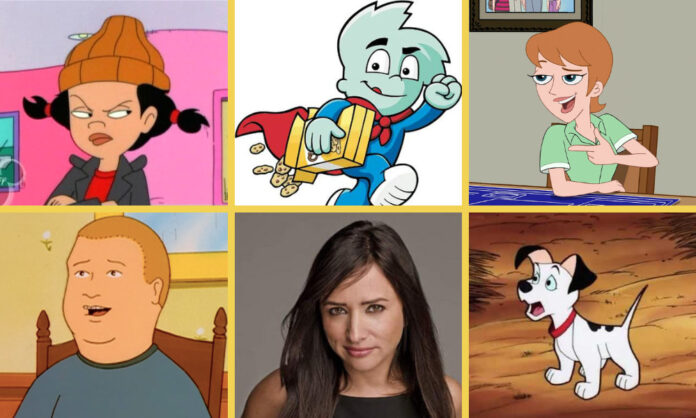 Animation fans know Emmy-winning actress Pamela Adlon as the unmistakable voice of Bobby Hill on King of the Hill. The talented and versatile writer-director-producer has also voiced Vidia in the Tinker Bell movies, Olsen Benner in Bob’s Burgers, Sonya on Big Mouth, Joanne on Tuca & Bertie, Baloo in Jungle Cubs, Lucky in 101 Dalmatians: The Series, Ashley Spinelli in Recess, Brigette Murphy in Milo Murphy’s Law and Lucas in Rugrats, among many others. In the live-action world, she has been praised for her roles in Californication, Louie and for co-creating, writing, producing, directing and starring in the Peabody Award-winning and Emmy-nominated semi-autobiographical show Better Things — in which she played an animation voice actress and mom raising three very demanding daughters. She’s also directing a new (untitled pregnancy) comedy starring Ilana Glazer, Michelle Buteau, John Carroll Lynch, Hasan Minhaj, Oliver Platt, the Lucas Brothers and Sandra Bernhard.

This months, fans can enjoy her talents in Hulu’s The Paloni Show! Halloween Special!, from Justin Roiland and Ben Bayouth, in which she voices Cheruce, the alienated and bitter middle child hosting a spooky animated anthology. We had the chance to recently catch up with the amazing Ms. Adlon to find out more about her latest role and brilliant career:

Animation Magazine: Thank you so much for finding the time to chat with us. We know you are one of the busiest actresses in both animation and the live-action world! First up, tell us how you got involved with Hulu’s new The Paloni Show! Halloween Special!

Pamela Adlon: You know, I’ve always been a big Halloween freak. When Justin Roiland sent me the link to check out all the different kinds of animation that were going to be featured in the special, I was so excited. I knew that our story was going to be the framework, but when I saw all the different artists and how they were telling each individual short, I went crazy. I’m a kid who grew up with Mad Monster Party and Rankin/Bass specials. I also loved Scooby-Doo! You can say that Halloween is in my bones!

You know, I don’t remember. I couldn’t tell you. Nothing begins and ends anymore! Time has no meaning anymore (laughs).

Tell us about Cheruce, this frustrated character you play in this new Halloween special.

She’s just misunderstood! Everybody is so driven and they’re doing The Paloni Show. She’s the voice of reason. She thinks she is, and the boys think that they are. But they’re just being boys. It’s pretty satisfying to play her because she’s the little sister or cousin, but she could actually be the mommy. Because let’s face it: Women are smarter!

How do you work with Justin Roiland?

Everyone who works in his world understands his pace, and his bandwidth. I relate a lot because he and I work in a similar way. We need people to keep up with the way we think. He sees everything very clearly. It really grounds everything and the work around you when the head knows what they want and what they’re doing. We are both creators and performers and showrunners. He doesn’t want to waste time, and it’s an incredible gift to be able to work with someone like him.

Do you find it liberating to work on animated shows for adults as opposed to voicing characters for family projects?

It’s always shocking when we are doing this in animation. Animation has come so far. I grew up with Ralph Bakshi movies — he was one of my heroes. It’s not just the language, it’s a depth that it’s not for kids or adults, it’s the human experience. With all the F bombs and the foul language, I just think that it’s just the way it is now. I mean you watch a show like Big Mouth and by far, that’s hands down the dirtiest show on TV. It’s even dirtier than Californication, which I did for seven seasons. I love it all. I think it’s great, and if you’re doing it in a way that you’re not trying to be salacious or inauthentic, it’s always going to work. Justin’s stuff is always grounded, and that’s the stuff that I respond to.

Looking at your overall career arc, you’ve been able to easily navigate both the worlds of animation and live action, as well as doing work for both kids and adults. What are some of your favorite experiences?

I would say that some of my favorite experiences have been in animation. It saved me from financial devastation and professional obscurity. I feel really lucky to have been part of animation since I started. Obviously, King of the Hill is a definitive moment for me, and Bobby Hill was by far the favorite character that I have played. I just love working with all the artists and animators. I started when Hanna-Barbera was still a working studio in Hollywood, and I knew those guys. So, I was very pleased to continue those themes in my show Better Things. I just adore Marty Krofft, and was so happy to offer him a speaking part on our show. I just adore all of it, going back to all the Klasky Csupo shows — those were my first jobs.

It’s been quite a ride. I heard that Cartoon Network is going through a tough time. I used to do so much stuff for them. This time of year always reminds of Cartoon Network. They used to have artists’ shows and they would put up all this great art on the walls and I would buy their original stuff. Animation is a real part of my DNA.

What do you think of the world of animation overall today?

I just think it’s all great. I love it all. I love hand-drawn 2D animation. That’s my big love. I also worked with Henry Selick on a stop-motion movie for about a year and a half, but unfortunately that project never came to fruition. I love what he does in his stop-motion world. My kids all grew up on The Nightmare Before Christmas. It’s all exciting. Animation is more considered and it’s not just not niche. My dad used to write comic books. I knew Stan Lee when I was a kid. I knew about the origins of Marvel comics. I just have that reference to all of that. I feel like people are going back to what they love and viscerally respond to and coming up with new creative ways to make animation. It’s all about the story and the art coming together.

What were some of the animation shows/movies that left a big impact on you?

It started very early. I remember there was a Bugs Bunny cartoon that starred Errol Flynn as Robin Hood, and he flew in on a vine in live action. [Rabbit Hood, 1949] Watching that cartoon just cracked my head open. I loved and Marvin the Martian, Snagglepuss, the Roadrunner, Tasmanian Devil, Wacky Races, Josie and the Pussycats, Witchipoo … all of them! I started doing voices because I loved to imitate those characters in those classic shorts.

Our final question today is one that you probably get all the time: What kind of advice do you offer those who want to get into voice acting in animation?

I get asked this question almost every day. There are great classes. Dee Bradley Baker is an old friend and is a legend. He has a great online course. There’s Charlie Adler. You can learn from these legends. My mentors are Jim Cummings, Billy West, Pat Musick, Jeff Bennett. Tress MacNeille. I worked with June Foray when I was a teenager. I’m a dinosaur now, but I’m old enough to have worked with all of them and to be lucky enough to be working with people like Justin Roiland today!