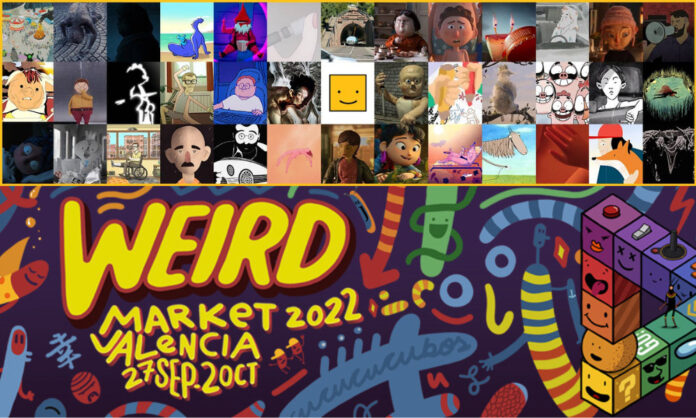 Weird Market is nearing its 14th edition, with the Spanish pro animation, video games and new media event set to take place in Valencia for the first time from September 27 to October 2. Accreditatations are now open.

Organizers have announced the 38 works from 18 countries around the world that will compete in the WFest international short film festival, as well as the 12 companies that will be part of the recruitment day.

WFest is divided into two contests: national and international. The films can be seen free of charge (after going through the box office) at the Filmoteca de Valencia (Rialto Building) on Tuesday, September 27; Thursday, October 29; and Sunday, October 2.

The Spanish competition will contain 11 works — one of them, La Prima Cosa by Omar Al Abdul Razzak and Shira Ukrainitz in co-production with France. This documentary presented in Annecy shows the friendship between the only Israeli Orthodox Christian Arab clown and a Syrian girl who survived the war.

One of the hallmarks of this edition is the mix of emerging talent with established names such as Pedro Rivero. The winner of two Goya Awards (Birdboy and Birdboy: The Forgotten Children) is also the author of the script for The Platform, a feature film that has become a worldwide viral phenomenon. Rivero will arrive in Valencia with Kevin Iglesias to compete with The Days That (Never) Were. The production is endorsed by festivals such as San Sebastián, Sitges or Zinebi and has been selected internationally in the United States, Colombia, Croatia, Mexico, Turkey and Australia.

Among the works that will compete to be in the list of winners the last two Movistar+ Short Film Project Awards by Weird Market: He Ran Towards His Comrade by Genis Rigol and Roped by Carmen Córdoba. Two stories with a strong social charge, but from very different perspectives; while the first presents an elderly businessman in search of popularity that shows ethical and moral contradictions, the second presents the bonds between mother and daughter in a personal and intimate way. Córdoba’s first film, Roberto, won more than 160 national and international awards, including selection at 11 festivals that qualifying for the Oscars.

Current topics and conflicts will be very present in the film selection’s themes, with a clear example being The Heights by Alejandro Salgado, a multi-award-winning author who here sets his sights on the women porters on both sides of the Ceuta and Melilla borders. Muerte Murciélago by Carlos Saiz confronts the viewer with a child in an isolated town with toxic water, who begins to imagine his future far from there. Choche Hurtado brings Kokuruga #2, a short film that screened at Clermont Ferrand where its bitter humor and portrayal of the loss of innocence and the passage from childhood to preadolescence stood out.

Suspense and noir style feature in Naive Mischief in Oak Paso by Manson and Marc Torres, Good Night Mr. Ted by Nicolás Solé and Phonorama by Alex Rey. Animator and comic-book artist Torres uses a reduced color palette for this work that transports the atmosphere of series such as American Crime Story or Twin Peaks. Solé uses black and white to immerse a teddy bear in a classic police drama. Finally, Rey blends a passion for cinema, illustration and animation into his own spin on a story inspired by Alfred Hitchcock’s Rear Window.

Local talent that will also be represented by Nicolás Petelski and his short film Hot Singles in Your Area. Petelski participated with his debut film A Table Game in the 2018 edition.

The international competition will feature 27 short films from a total of 17 cinematographies from all over the planet. A wide amalgam of techniques ranging from stop motion to digital 3D to drawing on paper. The country with the greatest representation is France with a total of six works, three of them in co-production: Cuddle by Margot Reumont (co-production with Belgium), Anxious Body by Yoriko Mizushiri (Japan) and Yugo by Carlos Gómez Salamanca (Colombia). The rest are Absence by Marc Héricher, Horizon of Success by Théophile Gibaud  and Wet by Marianne Bergeonneau, Mélina Mandon, Lauriane Montpert, Chloé Peyrebrune and Elvira Taussac.

The United Kingdom is a close second with five shorts: Night of the Living Dread by Ida Melum, Spring Roll Dream by Mai Vu, Your Mountain Is Waiting by Hannah Jacobs, Curiosa by Tessa Moult-Milewska and Black Slide by Uri Lotan (co-production with Israel).

Tied with three works each are Germany and Switzerland. The first backs Benztown by Gottfried Mentor, Louis I. King of the Sheep by Markus Wulf and Hysteresis by Robert Seidel, while on the Swiss side are The Record by Jonathan Laskar, Sweet Nothing by Joana Fischer and Marie Kenov, and Sauna by Anna Lena Spring and Lara Perren.

The selection is completed by two short films from the Netherlands: Pig by Jorn Leeuwerink and Sprite Fright by Matthew Luhn; two works from the United States: Bottle Cap by Marie Hyon and Marco Spier, and Meal on the Plate by Chenglin Xie (in co-production with China); and the rest of the works that will fight for a place in the final list of winners are Elevator Alone by Anastasia Papadopoulou (Greece), Passenger by Juan Pablo Zaramella (Argentina), Amok by Balázs Turai (Hungary), Iizuna Fair by Sumito Sakakibara (Japan), Bestia by Hugo Covarrubias (Chile) and Dog-Apartment by Priit Tender (Estonia).

One of the highlights in the agenda of each edition of the Weird Market is the recruitment day, where leading companies in the sector will seek to recruit new talent. A total of 12 international studios will have their talent scouts for this search that brings together multiple candidates every year.