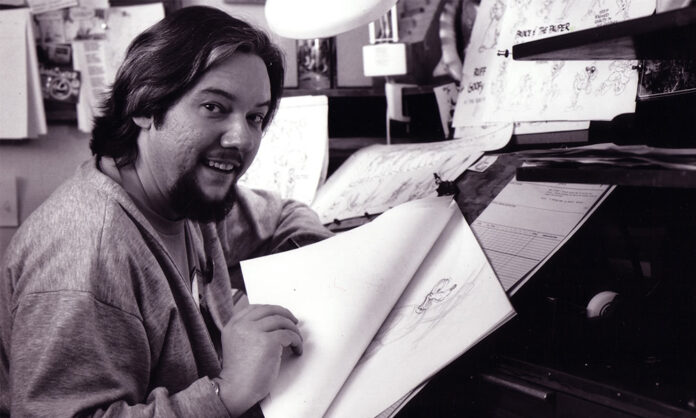 The importance of staying positive during tumultuous economic times.

Nowadays young animators read the industry news and worry about their job prospects. This studio is not hiring, that one is laying off, another just canceled a big project. Well shipmates, take it from this old salt: It was ever thus. I’ve seen studios rise, and studios fall. Places that once had buildings and annexes all over the world are now not even a footnote in a movie trivia book. All the studios that were big when I first came to Hollywood in 1977 — Hanna-Barbera, DePatie-Freleng, Filmation, Filmfair, Ruby-Spears — are all gone today, with the exception of Walt Disney. And yet we are all still here. All still working.

Because through it all, the one constant is us. The animation artist. We are still going. Studio closes? We pack up our stuff and move on to the next job. Like the medieval stone masons. This castle’s done? Valdemar just said the Duke of Chartres is planning a new cathedral. At least a hundred years’ worth of work. I’ll get my tools.

When I first got into animation I bought into the whole Frank & Ollie thing. Frank Thomas and Ollie Johnston were the legendary Walt Disney animators who graduated from Stanford University, then went straight into Disney’s. They spent the next 46 years being the most fantastic animators ever, retired wealthy and wrote books. I’m like, sign me up! Later as a professional, I realized the situation of the Nine Old Men was unique, but not the rule. Freddie Moore and Bill Tytla didn’t end up that way. Bill Hanna and Joe Barbera won a bushel of Oscars for MGM. They got laid off anyway when the studio downsized in 1957. They became successful when they started their own company and got into the new technology of television.

“Once you become a follower of the Goddess of Animation, she takes care of you.”
– Jim Logan

The animation business goes through cycles of boom and bust. In the late 1970s-1980s it was down. Then by 1986-1995 it was up. Then in 2003 it went down. And this is just the Hollywood scene. Other countries like Japan, China and France have their own cycles. Remember, if theatrical animation goes into a slump, broadcast and streaming may be up. If they are down, then games companies. Or visual effects. Or online content. Don’t be afraid to diversify. Forty years ago, I got laid off from the Richard Williams Hollywood Studio on Barham Blvd. I looked around and the only company hiring was Filmation. They were doing an action-hero show called He-Man and the Masters of the Universe. I was more a comedy guy than action-adventure, but I trimmed my sails and got the job. I made out pretty well for those years, and the show became a big hit. To this day I am invited to talk at Fan Cons for He-Man and She-Ra. So you never know what the next thing will be. A decade ago few expected Amazon and Netflix would be big in film production.

Keep the Faith in Your Talent

The secret is to never put all your hopes and dreams in one project, or one company. Oh, be a loyal employee, and be professionally disciplined. Just don’t expect them to remain grateful to you. I can’t tell you how many times I was told, “We are not just a company, we are a family!” “You’ll always have a job with us!” And they laid me off anyway.

What you should have faith in is your talent and your co-workers. Because when empires collapse, when the dust clears, they will be the ones there for you. We are all a tribe. Bob Kurtz called us “wonderfully damaged people.” Animators all know each other. I got more new jobs by word of mouth than ever by knocking on doors (metaphorically). I knew an old animation assistant named Jim Logan. He worked for Tytla, Bakshi and Richard Williams. Jim once told me:

“Once you become a follower of the Goddess of Animation, she takes care of you. Some days it seemed like there was nothing out there. I worried how I would pay my rent and feed my family. Then, the phone would ring.”

Good luck, good hunting. I’ll see you on the other end at the Motion Picture Home. I’ll save you a lawn chair.

Tom Sito is an animation veteran, historian and professor at USC. His credits include Who Framed Roger Rabbit, The Little Mermaid, Shrek, Aladdin, Beauty and the Beast, Prince of Egypt and The Lion King.