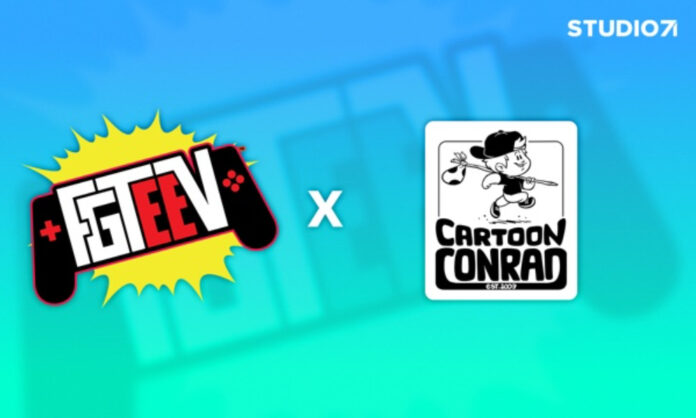 Global media producer-distributor Studio71 has signed a development deal with FGTeeV, one of the largest family gaming properties on YouTube with 42 million combined subscribers, along with Cartoon Conrad Productions to develop and produce an original animated series.

“I’m a huge fan of art and animation and being able to produce an animated show to call our own has been the goal for years, and I could not be more excited for this project,” said Vincent Carter (a.k.a. FGTeeV Duddy). “The folks at Cartoon Conrad have been amazing to work with on several other projects and could not ask for a better team to venture into this with. It’s going to be awesome!”

Titled n00bies, the show is described as ‘a coming-of-age story focused on a father and son relationship set amongst a backdrop of video game culture that will evoke nostalgia for viewers who have experienced the evolution of games and consoles over the years.’

The series is co-created by Carter and Luke Conrad of Cartoon Conrad. The deal was overseen and will be executive produced by Studio71’s President of Scripted Content Michael Schreiber, Studio71 Co-CEO Adam Boorstin, Development Exec Joe Hodorowicz and VP of Talent Operations Shana Davies.

“We’re thrilled to partner with Vincent and Cartoon Conrad on n00bies,” said Schreiber. “Vincent is a best-in-class creator who commands a massively engaged global following in the family & gaming community. This group’s combination of talent and creativity is really promising, and we have high hopes for this collaboration.”

n00bies joins a growing slate of scripted programming from Studio71, which also includes

The animated series development deal is an expansion of the relationship between Studio71 and FGTeeV who, for the past four-and-a-half years, have collaborated on 12 YouTube channels that have generated billions of video views. This deal is an example of how Studio71 helps digital-first creators expand their business and build value for their digital IP.

“Vincent is an icon in the family gaming/creator community as FGTeeV is a household name. We are so excited to be supporting him in bringing his passion project to life,” added Studio71’s Davies.

Cartoon Conrad is an artist-driven animation production house near Halifax, Nova Scotia, creating content for episodic and feature films with brands like TMNT, The Simpsons, Storybots, LEGO, Barbie and Cloudy with a Chance of Meatballs.