What can you possibly animate in 24 hours? You can find out by entering this year’s edition of the popular and free 24 Hours: Animation Contest for Students, which takes place Friday, Oct. 14th to Saturday, Oct. 15th. Hosted by talented animation professor Aubry Mintz at California State University, Long Beach, this event challenges students around the world to compete in teams of five to produce a 30-second animated film in under 24 hours.

The final 30-second films will be judged by a volunteer panel of top animation professionals:

“I am thrilled to announce we are in our 20th year and more than 10,000 students from 150+ schools have benefited from participating through the years,” says Mintz. “The challenge has featured participants from 20 countries:  Australia, Brazil, Canada, Czech Republic, Estonia, Germany, Hong Kong, India, Iran, Italy, Kenya, New Zealand, Mexico, Philippines, South Africa, Thailand, Taiwan, UK, and the USA!.”

This year, industry supporters are getting behind this contest with additional prizes and funding efforts to support students in new ways. An example of these new initiatives is an equipment request program for underserved students, which will not only allow them to participate in this year’s 24 HOURS challenge, but provide tools to aid in their virtual learning and production of art. Eligible students are encouraged to apply to the program. Students can register their team of five online.

Background: In 2002 Aubry Mintz challenged his students to work through the night to see how much they could accomplish. Five students remained when the sun rose, and Mintz was impressed by what they were able to produce. 24 HOURS Animation Contest for Students was born, and Aubry Mintz decided to continue to offer this contest once a year to students in search of a challenge.

“It brings out the best in students,” said Aubry Mintz, after watching entries from 291 teams in 2019. “It pushes them to their limits but teaches them to make creative decisions in a severely limited time. Working with a team of five challenges artists to learn how to work collaboratively. Sometimes this creates tension and obstacles that the teams must work together to overcome. It’s a rapid speed lesson in animation production. Although this contest sounds crazy — the model seems to work. The top films are as good as some completed student films that take several months to produce. I think it’s their chance to set personal goals and work outside of the classroom structure on a creative project.”

For its 20th year, the contest is teaming up with Wacom at LightBox Expo, October 14-16, 2022, in Pasadena. Fans can meet professional animators and see the amazing student work in Wacom’s booth (#801) while trying Wacom’s award-winning pen displays. Wacom products fill professional animation studios around the globe with the technology animators need to create the animated films and shows we love. “We continue to be inspired by the students who spend 24 hours pouring their creativity into this project. Wacom is honored to offer prizes to these students, who we know will have successful careers in animation,” says Linzie Reynolds, Director of Enterprise Business at Wacom.

For more questions about the contest, contact 24hourscontest@gmail.com, and join the Facebook group and review the FAQs: https://www.facebook.com/groups/24hourscontest/ 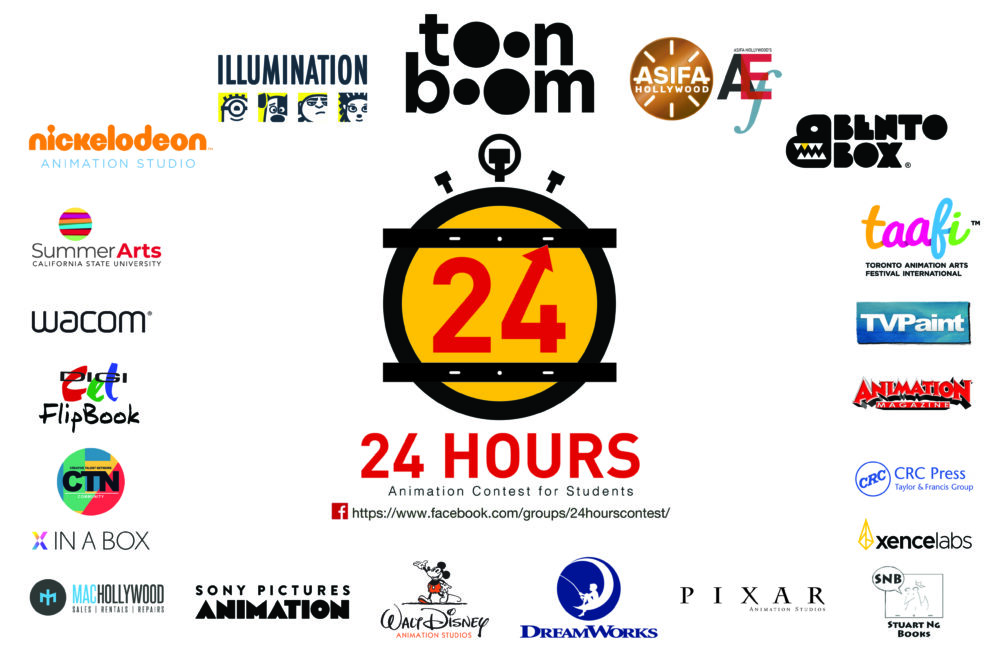