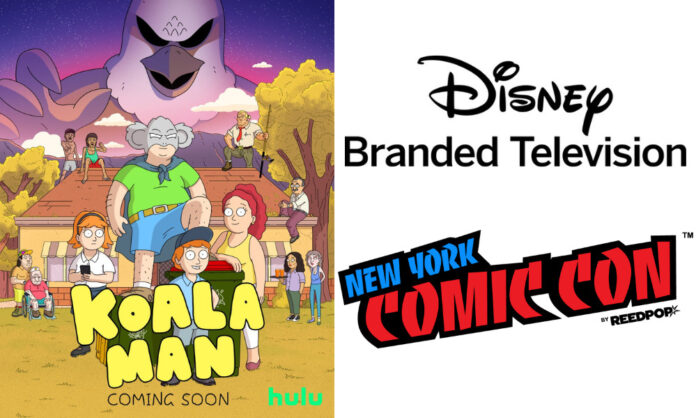 Among the highlights for toon fans will be the World Premiere of Hulu’s Koala Man, sneak peeks at upcoming Disney+ series The Muppets Mayhem, Justin Roiland’s The Paloni Show! Halloween Special! (Hulu) and Season 4 of Solar Opposites (Hulu), plus the NYCC debuts of Disney Channel’s upcoming series Marvel’s Moon Girl and Devil Dinosaur (2023) and fan faves Big City Greens and The Owl House.

Thursday, Oct. 6
1:30-2:30 p.m. – Big City Greens – We’re headed to the City! Join the cast and creators of the Disney Channel animated series Big City Greens. Get an opportunity to learn more about the show as they discuss their influences, answer fan questions and reveal an exclusive sneak peek! Room 405

3:00-4:00 p.m. – The Owl House – Hoot hoot! Join The Owl House creator/executive producer Dana Terrace and select cast members as they discuss the Peabody Award-winning animated series, the epic adventures that fans can expect ahead of its Season 3 premiere on Disney Channel and answer your burning questions. Room 405

4:30-5:30 p.m. – Koala Man – Head down under for Koala Man, a brand-new animated comedy from the creators of Rick and Morty and Pokémon Detective Pikachu coming to Hulu! Join creator, executive producer and the Koala himself, Michael Cusack, and executive producers Justin Roiland, Dan Hernandez and Benji Samit for the world premiere screening, followed by a Q&A to learn everything about what the suburban Aussie superhero is all about! Room 405

6:15-7:00 p.m. – Solar Opposites – Join our panel for an out-of-this-world conversation with co-creators and executive producers Justin Roiland and Mike McMahan, and executive producers Josh Bycel and Danielle Uhlarik, who will discuss Season 3 and the newly release Halloween special on Hulu, as well as what the Solars have to come, including an exclusive look at Season 4 and exciting news. Room 405

Sunday, Oct. 9
11:00-12:00 p.m. – The Muppets Mayhem – It’s time to play the music! Coming to Disney+ in 2023, The Muppets Mayhem is a brand-new series that, for the first time in the Muppets’ over 65-year history, focuses on the legendary Electric Mayhem band as they maneuver their way through the music world of Los Angeles with one goal — to finally record their first album. Join the “human” stars of the series — Lilly Singh, Tahj Mowry and Saara Chaudry — as well as co-creators and executive producers Adam F. Goldberg, Jeff Yorkes and Bill Barretta for exciting news, exclusive footage and more! Main Stage