While Netflix treated fans to a new featurette for Guillermo del Toro’s Pinocchio during the stateside TUDUM this weekend, the mirror fan event in Japan unveiled a deluge of anime news and updates.

Opening the presentation, actress and host of the anime section Ayane Sakurawelcomed fans with a special spotlight, starting with a performance by composer Hiroyuki Sawano at the Special Music Stage at TUDUM Japan.

Fans were then treated to the title, design and character art reveal for the new series Onmyoji, the first ever anime adaptation of Baku Yumemakura’s novel. The series will launch in 2023.

Junji Ito Maniac: Japanese Tales of the Macabre debuted stills from the upcoming series, based on selected works by the celebrated manga artist — including Hanging Blimp, Tomie・Photo, Four x Four Walls and Intruder.

Revealing cast and stills from 4 of the 20 stories in Junji Ito Maniac: Japanese Tales of the Macabre

The new cast members are:

Tiger & Bunny 2 actors Hiroaki Hirata (voice of Wild Tiger) and Masakazu Morita (Barnaby Brooks Jr.) were next to take the TUDUM stage with a presentation for their upcoming season. Part 2 episodes launch on Netflix on October 7. 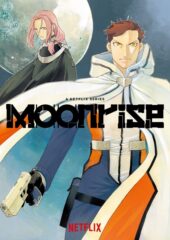 It’s Earth vs. the Moon in the new series Moonrise (2024), which brought a new teaser trailer and special artwork by character designer Hiromu Arakawa into fans’ orbit.

Moonrise tells a story written by novelist and screenwriter Tou Ubukata, who won several awards for his novel Tenchi Meisatsu and has handled series composition and screenplays for popular anime series such as Fafner in the Azure and Psycho-Pass. Manga artist Hiromu Arakawa (Fullmetal Alchemist, Silver Spoon)  designed the characters. Series director is Masashi Koizuka (Seasons 2 and 3 of Attack on Titan) and the animation is handled by WIT Studio (Ranking of Kings, SPY x FAMILY).

Gritty new sci-fi/drama series Make My Day announced its main character cast of Masaomi Yamahashi, Ayahi Takagaki, Kazuhiro Yamaji and Akio Otsuka, and revealed some of the mechanical art that went into the show’s design.

TUDUM viewers also got a glimpse at the new original sci-fi space horror anime series exception in a new promotional video ahead of its October 13 premiere.

Synopsis: In the far future, humanity has been driven from Earth and forced to move its population to another galaxy. Members of a scouting team are sent to search for a planet suitable for terraforming. The crew was created through a biological 3D printer, but a system malfunction causes one of the crew members, Lewis, to emerge in a deformed state. As Lewis turns on his fellow crew members Nina, Mack, Patty and Oscar, a countdown to the end of the mission begins in the frightening darkness of the ship.

Voice actors Mutsumi Tamura and Asami Seto then took to the TUDUM stage with a presentation of their new feature film, Drifting Home, about two childhood friends as set adrift into a mysterious sea alongside an entire housing complex. The movie is now streaming on Netflix worldwide. Read more about it in the November ’22 issue of Animation Magazine (available soon)!

Voice actor Ayumu Murase was up next, presenting a new teaser trailer for The Seven Deadly Sins: Grudge of Edinburgh. The all-new movie is based on an original story by series creator Nakaba Suzuki. Part 1 launches on Netflix worldwide in December.

Synopsis: Fourteen years since the Kingdom of Liones defeated the Demon Clan and brought peace to the land, Prince Tristan is tormented by his inability to control two great powers: the Demon Clan power of his father, Meliodas, who served as captain of the Seven Deadly Sins as the Dragon Sin of Wrath, and the Goddess Clan power of his mother, Elizabeth. When Elizabeth’s life is threatened, Tristan flees the kingdom and heads toward Edinburgh, where Deathpierce — who was once a member of group of the kingdom’s Holy Knights, the Pleiades of the Azure Sky — maintains his castle. But what are Deathpierce’s intentions? The wheel of fate begins to move and sweeps up even The Seven Deadly Sins…

The Way of the Househusband announced it will return with a look at new stills from the series.

Lookism, the new animated series based on the popular Korean webcomic about a teenager who wakes up one day with a handsome face and perfect body, was announced during the TUDUM event with an exclusive clip. The animation is produced by Studio Mir (DOTA: Dragon’s Blood, The Witcher: Nightmare of the Wolf). The original webcomic, launched in 2014 (serialized on LINE Manga and Naver WEBTOON), has racked up 8.7 billion views globally.

Actresses Rie Takahashi and Mikako Komatsu from the anime adaption of the manga Romantic Killer were next to the TUDUM stage with a presentation on their series about giving up the single life for dating, premiering October 27.

Legendary filmmaker Takashi Miike was announced as the chief director for the new anime series Onimusha, based on Capcom’s video game series of the same title. Fans got a first-look at the artwork for protagonist Miyamoto Musashi, modeled after the late Japanese screen icon Toshiro Mifune.

It’s your first look at ONIMUSHA, an anime based on CAPCOM’s legendary game. Created by Takashi Miike and Shinya Sugai from Sublimation, with Musashi Miyamoto modeled after Toshiro Mifune #TUDUM#TUDUMjapan#ONIMUSHA#鬼武者 pic.twitter.com/oeX6FO2hWS

Animation fans were treated to the teaser for the four-part animated series rooted in Japanese folklore, ONI: Thunder God’s Tale. Set in a mystical world of Japanese gods and spirits, a courageous girl strives to follow in her mysterious father’s footsteps and find her true powers in this beautifully rendered new show from Dice Tsutsumi (The Dam Keeper). Read more about it in the November ’22 issue of Animation Magazine.

Netflix’s favorite irate red panda office worker Aggretsuko will be back for Season 5, and TUDUM viewers got the first look at stills from the new season.

Ready to rage with Retsuko again? Aggretsuko season 5 is on the way!#TUDUM#TUDUMjapan pic.twitter.com/VtSHMHSrlu

Gudetama: An Eggcellent Adventure, the new series premiering December 14 featuring the globally popular egg and chick combo, Gudetama and Shakipiyo, was featured in a special presentation with a trailer for the show.

In addition to these animated sneak peeks, Fairouz Ai, the voice actress for “Jolyne” from JoJo’s Bizarre Adventure: STONE OCEAN, joined live-action stars Kento Yamazaki and Tao Tsuchiya from Alice in Borderland and Nana Mori and Natsuki Deguchi from The Makanai: Cooking for the Maiko House in a special interview segment dubbed “Beyond Borders” and talked about personal growth through their characters, and reaching fans outside of Japan.