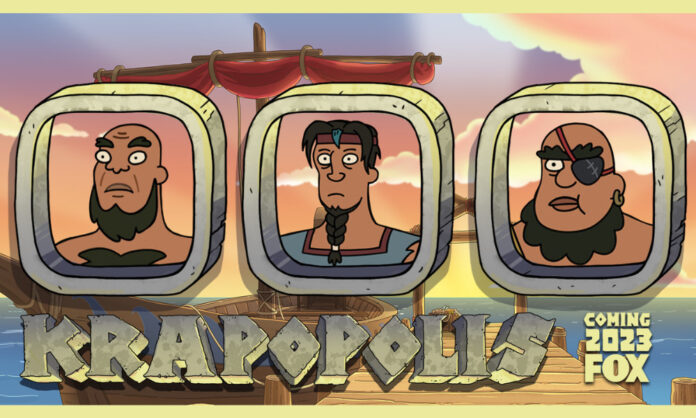 FOX and Blockchain Creative Labs announced today that the polls will officially open for Krapopolis NFT holders to vote on episodic elements within the highly-anticipated animated series from Emmy Award-winner Dan Harmon (co-creator Rick and
Morty).

Holders of the Krap Chicken NFTs (described as “the ultimate Krapopolis fan pass”) will vote to decide which sailor succumbs to the wrath of a kraken in a special Thanksgiving weekend sneak peek of the comedy on November 27t on FOX.

Set in mythical ancient Greece, Krapopolis centers on a flawed family of humans, gods and monsters that tries to run one of the world’s first cities without killing each other. The series features voice actors Richard Ayoade (The IT Crowd), Emmy-winner Hannah Waddingham (Ted Lasso), Matt Berry (What We Do in the Shadows), Pam Murphy (Get Shorty) and Duncan Trussell (The Midnight Gospel).

From Bento Box Entertainment, Krapopolis is billed as network television’s first animated series to be curated on the blockchain. The series will premiere in May 2023 on FOX.

The inaugural Krapopolis NFT collection features 10,420 Krap Chickens — uniquely generated pieces of art, produced and illustrated by the artists who created the show. As the series unfolds, Krap Chicken collectors will see elements of their NFT on television and use it to access token-gated content, exclusive show voting rights, private discord channels and meet-and-greets with the cast and crew.

‘Rick and Morty’ S6 Premiere Gets Online Run Thru Sept....

Baby Shark & Line Friends Celebrate the World’s Masterpieces in ‘Night at the Art...