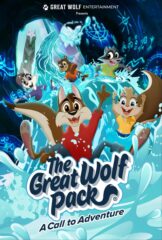 We had a chance to chat with the film’s exec producer Brooke Patterson about this entertaining new family enterprise:

Animation Magazine: Can you tell us a little bit about the development history behind this lovely Wolf Pack project?

Brooke Patterson: Storytelling is a key aspect of the Great Wolf Lodge resort experience, and many of our family entertainment offerings center around the stories of our characters, such as StoryTime and Yoga Tales, so this was a natural next step. There is already great affinity for our characters, but now by branching out into animation, we’re able to further develop our characters as well as introduce new characters, new stories and a new world for them to explore.

When did you start working on it and how long did it take to produce?

We discussed further fleshing out our character IP a little over three years ago, but about two years ago we really started getting things in motion. Once we had the team assembled, the overall production of the animated content took about 18 months.

We partnered with animation studio Six Point Harness on the animation.

What was the visual inspiration for the project? How would you describe the animation style?

We wanted the characters to be bold and modern, with an environment that had more of a hand painted, hand drawn esthetic. Chris Bailey and the team at Six Point Harness did an outstanding job of capturing that vision — giving our characters a unique and distinct look, with dramatic and whimsical worlds for them to explore.

What do you love best about this special?

I love the sense of adventure and exploration the content offers, and how the stories we’re telling and the character interactions touch on meaningful themes — such as the importance of kindness, compassion and diversity. There’s some real positive energy that comes from the animated content we developed, and the characters reflect modern families and real kids — so while they have strengths there are also flaws and challenges they need to overcome.

Where will it be shown?

We’re excited to officially debut The Great Wolf Pack: A Call to Adventure at all of our 19 resorts across North American starting on Saturday, September 3. We will also have a premiere event on our YouTube channel on September 5.

What were the biggest challenges for the team?

We assembled an amazing team to help us overcome any challenges, but what took the most time was character development. We wanted to make sure we got every element right for each character, from the attitude, look, movement and voice. It was important that we explored every last detail as we brought the characters to life. I think it really paid off, and our vision was fulfilled.

What do you hope audiences will take home from this special?

I hope families find the content entertaining, and that they are able to identify with some of these meaningful themes woven in. I would love if after watching the film together, families open up and have a conversation about the importance of listening, kindness, compassion, overcoming issues, acceptance – the themes we encounter in our everyday lives.

Are more specials/series in the works for the Great Wolf Pack?

I’m excited because we created a world for the characters that we can continue to explore, providing the backdrop for new adventures and stories. We already have some 22-minute episodic content in development and some five-minute character shorts that we will look to debut in the coming months.

The Great Wolf Pack: A Call to Adventure will be available to watch at youtube.com/c/GreatWolfPack on September 5. Watch the trailer here and check out a new behind-the-scenes video below.