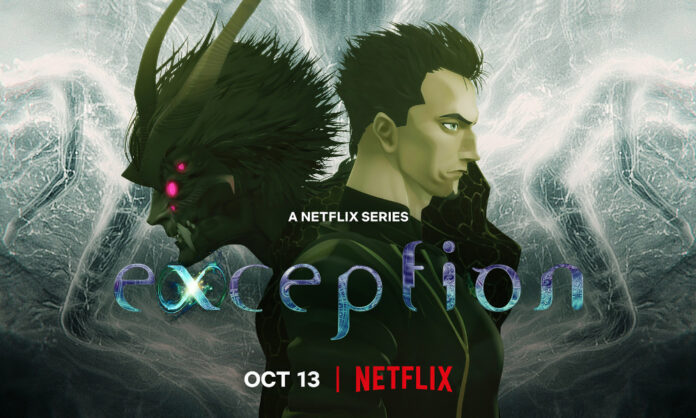 Netflix has revealed the official trailer, key art and premiere date for its upcoming sci-fi/horror original anime exception, baed on an original story by Hirotaka Adachi (Zoo, Goth, Kids, Calling You), a.k.a. Otsuichi, and featuring characters designs by Final Fantasy illustrator Yoshitaka Amano (Gatchaman, Casshan, Vampire Hunter D). This tale of terror set in space, ‘…where there is no escape,’  premieres October 13.

The streamer also announced that exception will feature music composed by Oscar and Grammy winner Ryuichi Sakamoto. “I’ve always liked science fiction and when I read the script, it made me want to see it visualized so I decided to participate,” said the world-renowned musician.

“We live in a time when cloning and other gene manipulation technology is advanced but the questions that arise here are, ‘What is life?’ or ‘What is humanity?’ This [series] deals with these kinds of questions head on,” Sakamoto explained. “​​I wanted to make the main theme song be a symphonic piece — the kind that has become a staple for sci-fi since Star Wars. I made the soundtrack as a whole be darkly ambient and worked towards making the entire soundtrack feel like one piece of music rather than separate by scene. That said, I did include a degree of harsh sounds in the fighting scenes. I was able to make a soundtrack that I like very much.”

“What is a human?”
Every life is precious – there are no exceptions.

Synopsis: In the far future, humanity has been driven from Earth and forced to move its population to another galaxy. Members of a scouting team are sent to search for a planet suitable for terraforming. The crew was created through a biological 3D printer, but a system malfunction causes one of the crew members, Lewis, to emerge in a deformed state. As Lewis turns on his fellow crew members Nina, Mack, Patty and Oscar, a countdown to the end of the mission begins in the frightening darkness of the ship.