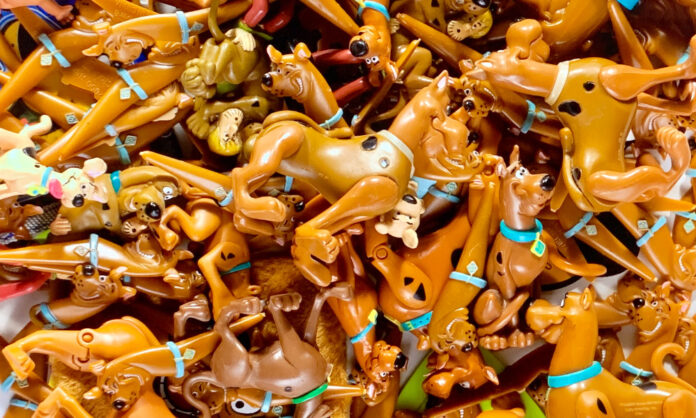 The recently published art book My Life and Toys (G Editions) provides readers with a fascinating look at writer/director/producer Brian Levant’s (Mork & Mindy, Happy Days, Beethoven, The Bad News Bears, The Flintstones, The Flintstones in Viva Rock Vegas) fantastic collection of toys from comics, TV and films. Featuring eye-popping photos by Joe Pellegrini, this glorious 480-page book (1500 illustrations!) spans decades of media history, starting with the author’s childhood favorite shows growing up as well as mementos collected from TV series and movies Levant wrote and produced. We had a chance to chat with the avid collector and Hollywood veteran about his impressive collection and the role of cartoons and pop culture in his world:

Animag: Do you remember when your interest in collecting toys and pop culture memorabilia began?

Brian Levant: “Collect them all!” screamed the back of every cereal box. Get a “FREE TOY” by sending in multiple “proof of purchase” coupons. Captain Kangaroo games, records, books, puppets, Colorforms and bicycles. “Kids tell Mom to buy you Royal Pudding and Pie filling, with Howdy’s Doody’s face on the box!” Kids growing up like me in the fifties were conditioned to collect and consume anything that was tied to the characters we loved on TV…and the Ad Icons who sponsored them. Clearly, it’s obvious that my collections are rooted in those experiences… which is a nice way to say I’ve never really grown up. 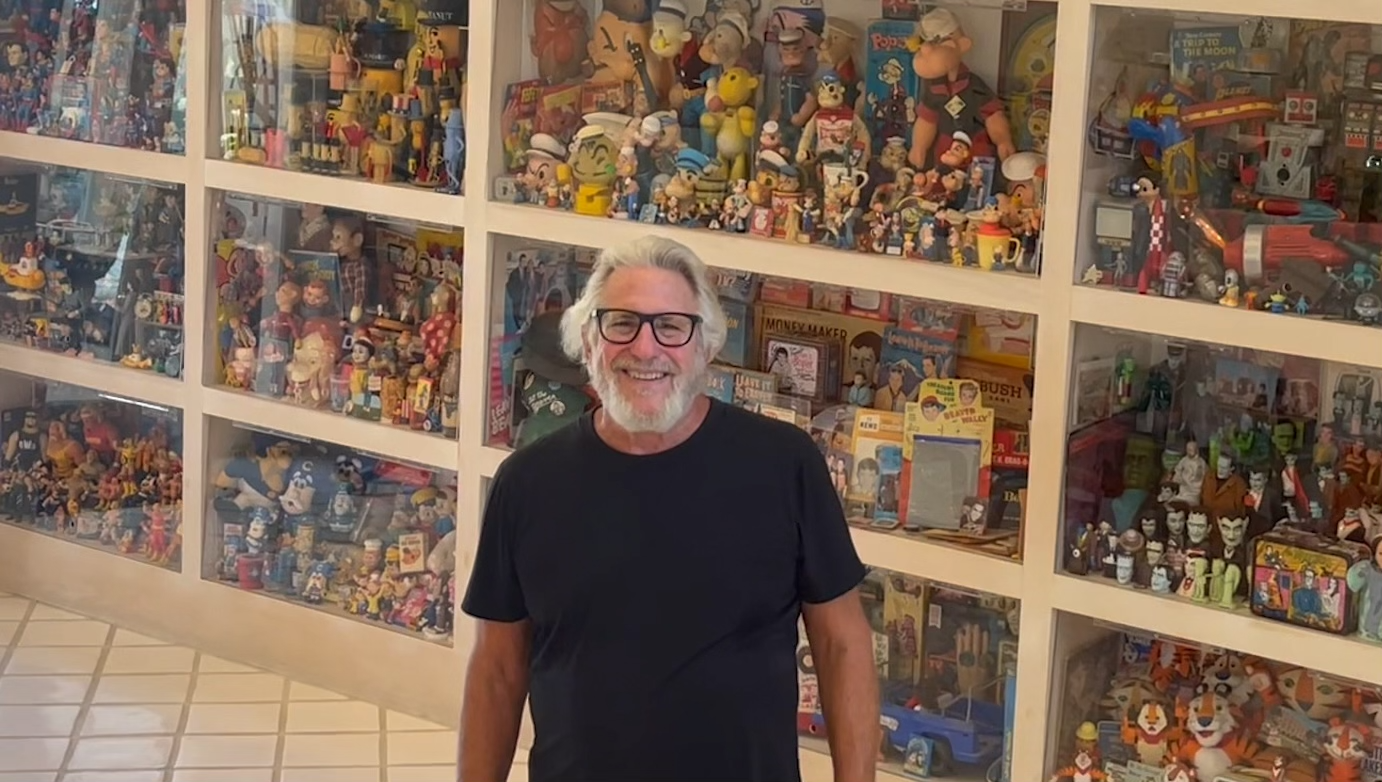 What were your favorite toys growing up?

Levant: I had so many favorites as a kid. How could I choose between the Pluto figural wall clock with bones for clock hands and moving glow-in-the-dark eyes and dial—or the original Robert the Robot?  How do you pick your Christmas morning cardboard storefront stocked with miniatures of prominent brands over the sleek, post-modernist, primary-colored 29 cent ray gun/squirt gun… Or is it the Mickey Mouse bell I demanded to be attached to the handlebars of my first two wheeler… Or the store display Lamb Chop puppet my mother literally stole from Marshall Fields when I had to have one… or is is the champ the tiny, glow-in-the dark lightbulb— a prize in a gumball machine? They’re all fondly remembered and I’ve re-acquired many of them. After all these years, looking at them still gives be a “buzz.”

How many rooms in your home are devoted to your collection?

How many rooms are devoted to my collections?  Ha, that’s funny. Our entire house is dedicated to showcasing our myriad collections… and the place isn’t a small house, it’s the size of the Truman Library. I feel sorry for people whose mates forbid them from displaying their Batmobiles, He-Man castles and  Marx Brothers posters anywhere beyond the walls of their offices. My wife, who’s a brilliant collector as well, and I, have always tried to have our homes reflect the color, joy and energy our art and collections bring to our lives.

Did you ever have a toy that scared you or seem possessed?

One of the first Twilight Zone’s I ever saw was “Talking Tina” where a a version of Mattel’s popular Chatty Cathy doll [voiced by the late June Foray] threatened and succeeded in offing Telly Savalas. Scared the crap out of me. But, I don’t think I ever truly felt that an intimate object took on a life of its own was until I started working with the master puppeteers from Jim Henson’s London Creature Shop. It was astounding to reconnect with your childhood ability to forget that a human is “pulling the strings.” I did  four films with the Creature Shop. The people who worked there were some of the most talented I’ve ever encountered.

What kind of advice can you give someone who has the same obsessions as you do?

What advice would I give to someone with the same predilections? Put your money in an IRA.  Save for your children’s college. Buy insurance for 24-hour care for when your old rather than an Ideal 1939 Superman composition figure… or a Marx 1928 Walking Harold Lloyd tin toy—or a 29 foot long loaf Wonder Bread in your backyard, like me.

Did your parents ever throw anything out that would have been worth a lot to you today?

Are you kidding? Number one, whose parents didn’t toss something that was meaningful to them? In my case, I returned home from overnight camp at 15 to discover that my mother not only threw out my comic book collection … but our father as well.  As you could imagine, I was very upset about the comics. Today when I see what comics I had like the Justice League cover with the “Five Fingers of Felix Faust”, Atom #1 and the first Batman Annual are going for, I think about how I could use that money to buy that 24-hour care insurance for when I get old.

Why do you think animation fans and professionals are usually always fond of collecting toys and pop culture collectibles too?

Animation fans and professionals are collectors because they were once  profoundly moved by Mickey Mouse, or Tom & Jerry or Bugs Bunny or Woody Woodpecker or Woody from Toy Story.  At some point they were transported as an audience and sought to make the art form their living or their passion. Photos of animators in their offices surrounded by the inspirations of their craft surprise me in the least. I couldn’t count the hours I’ve spent lost in my collections, always emerging with new ideas and concepts. I don’t imagine it’s much different for animators.

It’s very odd to be at the helm of adaptations of TV  programs you saw the premieres decades before, but I think the most fun I’ve ever had professionally were making The Flintstones and Scooby Doo films.  It still seems outlandish to think of how I spent months working a in a quarry with Fred Flintstone. Though establishing a tone that preserved everything we loved about the shows while  straddling the line between reality and cartoon, was a constant high wire act, the giddy joy that accompanied every step of the development and production  was tempered by the responsibility of being the caretaker for the crown jewels in the Hanna Barbera empire.

What is on your “I have to get my hand on this” list?

I never had a “want list” mostly, I would see something and I had to have it… then I’d want more of whatever it was. I guess, if I was advising anyone on collecting, as an investment, always seek the highest condition, in the box and top graded comics & cards. But know many of the things I value the most are objects that are battered and worn. Things that were once treasured… and loved.

At this point in my life, with the book complete, my collecting appetite has been severely diminished. Oh, I’ll manage to find a thing or two at a toy show or flea market, but for the most part, the mission has been completed. My shelves are full. My line is that I “don’t have room for another Olive Oyl!” Sure, there are things I still drool over, but it’s no longer imperative to own them, when I can simply appreciate them, like you enjoy  a movie or TV show. Is that a hint of maturity? Maybe… but there’s a line from one of the final episodes of Leave it to Beaver, where the Beave is frightened that he’s no longer a child. His father comforts him by telling him that “A man never grows so old that he forgets what it’s like to be a little boy” 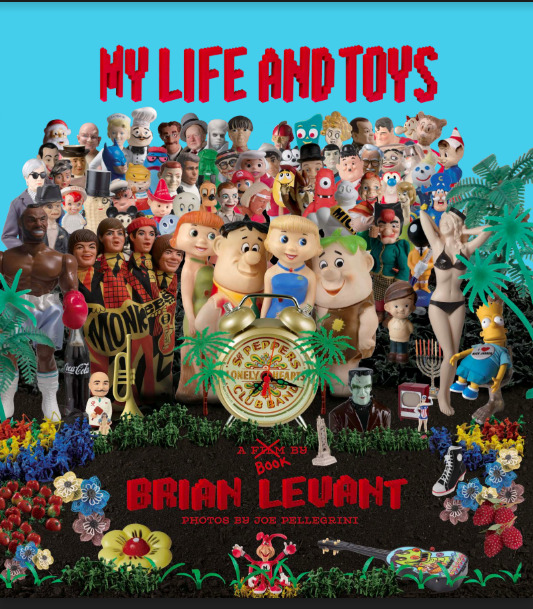