Trailer: DreamWorks’ Backyard Squad Returns for More ‘The Mighty Ones’

Tiny heroes face major misadventures and huge hijinks with 10 all-new episodes of The Mighty Ones debuting on Peacock and Hulu on September 1. Created and and executive produced by ​Sunil Hall​ (Gravity Falls, Pickle and Peanut) and ​Lynne Naylor (Samurai Jack), the series hails from the creative team behind some of the most influential animated series of the last two decades — ​like The Ren & Stimpy Show, SpongeBob SquarePants and The Powerpuff Girls! 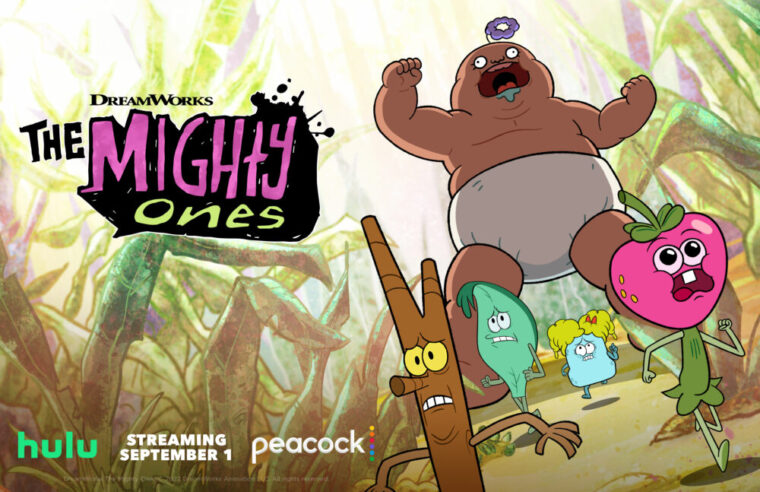 In every backyard a secret world exists filled with tiny creatures. The Mighty Ones follows the hilarious adventures of the smallest of them: a twig, a pebble, a leaf and a strawberry who call themselves “the Mighty Ones.” These best friends live in an unkempt backyard belonging to a trio of equally unkempt humans who they mistake for gods. Despite their diminutive stature, the Mighty Ones are determined to live large and have fun in their wild world.

After being stuck inside a snake, Season 3 sees the Mighty Ones escape to find the yard that was their home has changed forever. A trendy new couple has moved into the house and transformed the backyard into a hipster paradise. As these four best friends try to navigate this strange new land, they find themselves up against suburbia’s biggest threats; lawn mowers, garden gnomes, leaf blowers and worst of all … a baby!

The Mighty Ones features the voices of Jessica McKenna as Rocksy, Alex Cazares as Very Berry, Jimmy Tatro as Leaf and Josh Brener as Twig, guest starring Johnny Pemberton as Gherkin.