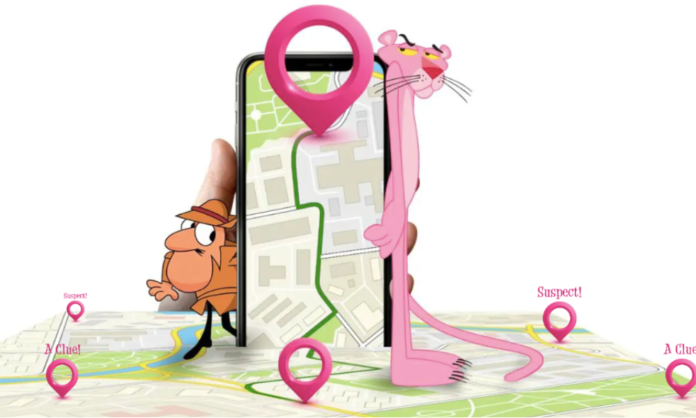 How does it feel to look for a precious stolen diamond with the legendary Pink Panther and Inspector Clouseau? Players of a new interactive game created by MGM and the Bounce app  called “The Pink Panther and the Case of the Missing Diamond” are about to find out, as they will be able to navigate through their city, stopping at popular destinations and question suspects to uncover clues to a fun mystery, led by none other than Inspector Clouseau.

According to the game creators, Bouncers get to explore, discover, and play on their own schedule. They can even pause and resume their experience as often as they want until they are finished, creating the perfect opportunity to explore further or hang out at one of the locations. Bounce’s app ensures that no matter where you play ‘The Pink Panther and the Case of the Missing Diamond,’ Bouncers have the exact same experience, just in their city.

“The exciting thing about this interactive Bounce app experience is that decisions have consequences and sometimes you only have one chance, so you have to stay on your toes, pay attention and look beyond the obvious,” says David House, founder of Bounce and creator of ‘The Pink Panther and the Case of the Missing Diamond’ app experience.

The game can be enjoyed both alone or in groups, for $34.99 per car. House adds, “I’m a fan of bouncing in a group, that way you can explore all the options and get more answers, and maybe find an easter egg or two!”

The popular Pink Panther character started life in the credits of the legendary detective series of the same name more than 50 years ago. Its popularity spawned TV series, specials, comics and merchandise, and remains an icon of the era. The first movie in the series (directed by Blake Edwards and starring Peter Sellers, David Niven and Robert Wagner) featured the famous animated opening sequence created by DePatie-Freleng which introduced Henry Mancini’s catchy theme, as well as the smooth and clever animated character.

Designed by Hawley Pratt and Friz Feleng, the character went on to star in his own series of theatrical cartoons (beginning with The Pink Phink in 1964) and nabbed his own Saturday morning series The Pink Panther Show (1969-1980). The character continued to star in various TV shows, specials and games.

‘The Pink Panther and the Case of the Missing Diamond’ in-app experience will be available in multiple cities across the U.S., including Austin, Chicago, Las Vegas, Los Angeles, Nashville, New Orleans, Philadelphia, San Francisco, Seattle, and Washington, D.C., with many additional destinations scheduled for future release. There’s also an option to request the experience to be created in your own city or neighborhood. This can be done in the app or via the Bounce website, https://experiencebounce.com/pink.