Based on the novel The Tale of the Heike (Heike Monogatari) translated by contemporary author Hideo Furukawa, Masaaki Yuasa’s new movie Inu-Oh (Dog-King) is set in 14th century Japan. The story centers on the friendship between a dancer born with unique physical characteristics and a blind musician. The film, which is produced by Science SARU (the Tokyo studio founded by Yuasa and producer Eunyoung Choi), was released in Japan in May, and will be released theatrically on August 12 in the U.S., thanks to GKIDS.

More than a century later, a young boy named Tomona and his family make their living on the shores of Dan-no-Ura fishing and diving for relics from the battle. At the behest of a cabal of corrupt nobles, Tomona and his father bring up the sacred sword the sun goddess Amaterasu Omikami gave to the ancestors of the Japanese Emperor, which was lost in the battle. For committing the sacrilege of looking on the holy blade, Tomona is blinded and his father struck dead. Tomona makes his way to Kyoto, where he grows up to become a famous musician, performing sections of The Tale of the Heike, accompanying himself on the biwa (Japanese lute). 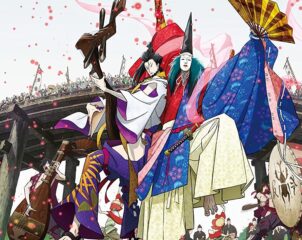 The principles of Noh, an exquisitely mannered form of theater, were also established during the early 14th century. The movie’s title character is the son of the leader of the foremost Noh troupe in Japan. Because his father struck a deal with a demon to obtain this prominence, Inu-Oh is grotesquely deformed. His limbs are of uneven lengths and his face is so hideous he must always wear a wooden mask. But as he learns to dance, Inu-Oh’s body transforms, assuming beautiful human proportions. He and Tomona combine forces, performing their original songs and dances, and they become 14th century pop stars.

Unlike many recent American features which rely heavily on dialog, Yuasa uses the animation itself to tell much of the story. The audience sees Inu-Oh’s distorted, flailing limbs begin to move with an assured grace as they transform. Traditional Noh dances require the dancers to perform almost miniscule movements at an extremely slow pace. Yuasa and his artists discard those traditions: Inu-Oh’s dances incorporate moves taken from classical ballet, gymnastics and break dancing.

“I thought the content of Noh handed down from this era was too narrow to describe the state of affairs then,” Yuasa explained in a recent email interview. “To capture the actual appearance of the past, I adopted the perspective that ‘anything we can imagine today must have been thought of at least once by someone in the past,’ and included various contemporary dance styles. As the original dances were an intense dedication to the gods, the dancers chose a more fundamentally dynamic form.”

For the songs Tomona and Inu-Oh perform, Yuasa worked with actor/dancer Mirai Moriyama and pop star Avu-chan, who provide the characters’ voices. “I always participate in the creation of the music,” Yuasa said. “In this case, we created a video with a tentative song, then I asked the musicians to compose music to go with it. When the actors had recorded their lines except for the singing and had a good grasp of their characters, I asked them to write lyrics based on the tentative words. I tried to make the best use of their ideas as expressive artists and adjusted the singing style to match the picture and sound.”

The Tale of the Heike stresses the Buddhist belief in the transience of all things: “The bold and brave perish in the end: They are as dust before the wind.” Yuasa echoes those sentiments when he concludes, “This film portrays weak people. They have done great things, but it is all as dust before the wind. I believe love and power will be remembered, but the most important thing is empathy and understanding in the moment.”

GKIDS will release Inu-Oh in U.S. theaters on August 12. Find locations and showtimes at inu-oh.com.