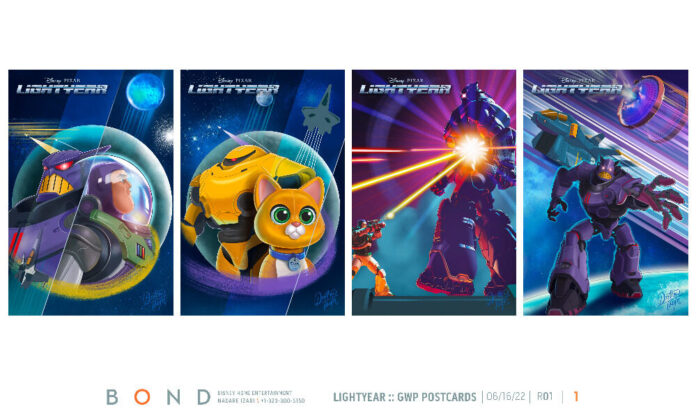 Buzz and his fellow space rangers are ready for their next mission, as the thrilling new Pixar animated feature Lightyear takes one giant leap for toonkind onto Digital and Disney+ today (August 3)! To celebrate this close encounter as well as the upcoming 4K, Blu-ray and DVD release on September 13, our friends at Walt Disney Studios Home Entertainment are offering Animag readers an exclusive first look at exclusive artwork for commissioned from artist Dorothea Taylor.

Taylor is a founder and the current owner of T.P. Design (tpdesigninc.com), a studio based near Atlanta in Stone Mountain, Georgia. For more than 30 years, she has brought a signature blend of illustration, and typography/title design to her work for clients like Pepsi, Church’s, General Mills, Cartoon Network, Georgia Pacific, Dunkin Donuts, KFC and Taco Bell, describing her total package approach with a word of her own coining: “designustration.”

Lightyear Synopsis: Marooned on a hostile planet 4.2 million light-years from Earth alongside his commander (Uzo Adoba) and their crew, legendary space ranger Buzz Lightyear (voiced by Chris Evans) embarks on an intergalactic adventure alongside ambitious recruits Izzy (Keke Palmer), Mo (Taika Waititi), Darby (Dale Soules) and his robot companion, Sox (Peter Sohn). As this motley crew tackles their toughest mission yet, they must learn to work together as a team to escape the evil Zurg (James Brolin) and his dutiful robot army that are never far behind.

Learn more in our exclusive interview linked above and by visiting movies.disney.com/lightyear.