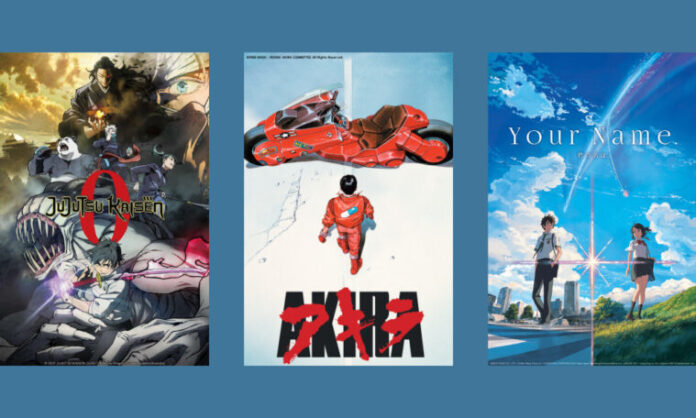 Celebrating all things anime with attendees at the 6th Annual Crunchyroll Expo this weekend in San Jose, California, Crunchyroll, the global leader in bringing the ultimate anime experience to audiences around the world, shared many exciting announcements during its Industry Panel on Saturday, which included announcements of new show acquisitions, exclusive first looks, fan favorite movies coming to the streaming service, and more.

Announcements kicked off with a thrilling update that Crunchyroll will be rolling out the red carpet to welcome some of the most beloved anime in cinema history to its platform, including the sci-fi cult classic Akira  directed by Katsuhiro Otomo, the fantastical modern romance Your Name. from director Makoto Shinkai (Suzume no Tojimari, Weathering With You), as well as director Mamoru Hosoda’s critically acclaimed catalog The Girl Who Leapt Through Time, Wolf Children and The Boy and the Beast. Fans will start to see new movies launching on Crunchyroll every Thursday, starting August 11 through October. 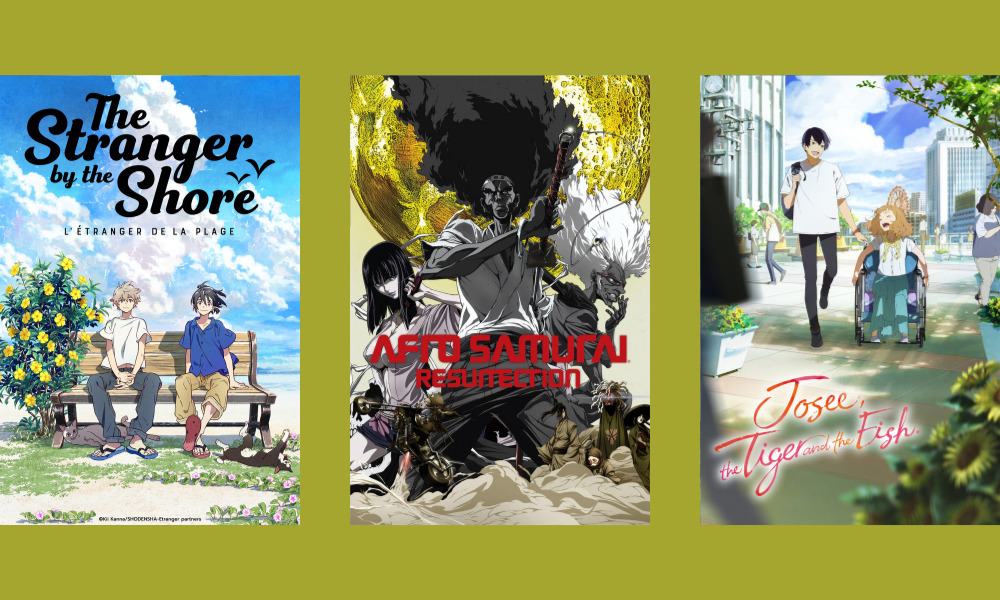 Other eagerly awaited titles include Afro Samurai: Resurrection starring Samuel L. Jackson, the storybook tale of Josee, the Tiger and the Fish, the dramatic romance The Stranger by the Shore, and the sci-fi coming-of-age story Sing a Bit of Harmony, among many others, including those from popular anime franchises Free!, Fairy Tail, PSYCHO-PASS, Code Geass and Black Butler.

Additionally, the blockbuster film JUJUTSU KAISEN 0 will also be making its premiere on Crunchyroll starting on September 21. The prequel movie to the critically acclaimed anime series JUJUTSU KAISEN from TOHO Animation released outside Japan, across the globe, earlier this year. The film is based on the prequel manga (JUMP COMICS / Shueisha) to the smash hit supernatural adventure series written and illustrated by creator Gege Akutami.

New title acquisitions announced during the Crunchyroll Industry Panel include:

My Hero Academia Season 6 – Fans can dive back into Izuku’s quest to become a super hero (despite his lack of a super power) in the hit show’s latest season, slated to join the Crunchyroll lineup in October. BONES studio’s President, Masahiko Minami, shared the news with panel attendees on Friday. It was also revealed that the studio’s Mob Psycho 100 III (Oct. 2022) and Bungo Stray Dogs Season 4 (Jan. 2023) are heading to the platform.  A new trailer for MHA S6 was unveiled for Crunchyroll Expo.

In S6, with Bakugo and Todoroki, Deku is doing his work-study at the office of the number one hero, Endeavor. Working hard in the best possible environment, he is growing as a hero and using Blackwhip, a new Quirk that was hiding in One For All. Meanwhile, Tomura Shigaraki from the League of Villains clashes against the Metahuman Liberation Army led by Re-Destro. While he’s being driven into a corner fighting Re-Destro, he recovers forgotten memories of his terrible childhood and is awakened. He seizes the Metahuman Liberation Army, expands its influence and now desires a new power for himself to destroy everything. 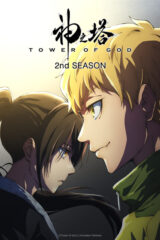 Tower of God Season 2 – The long-awaited second season of the celebrated anime series, based on SIU’s sensational webcomic on WEBTOON — the world’s largest digital comics platform home to 82 million monthly users — where it has over 4.8 billion views online, will also be debuting its first volume of the upcoming graphic novel edition from WEBTOON Unscrolled on November 22. S2 of the dark fantasy series will follow Bam as he continues his journey through the mysterious tower. A new recap trailer and key visual were also shared in anticipation of the upcoming anime sequel. SIU also shared the following message:

“It seems like season 1 of the animation just came out yesterday, but now I’ll have a chance to see all of you again through season 2! I’m so grateful to all of the anime production staff as well as the readers, and I can’t wait to see how season 2 turns out. Thank you as always for all your support!”

My One-Hit Kill Sister – Based on the web novel and manga Isekai One Turn Kill Nee-san: Ane Dо̄han no Isekai Seikatsu Hajimemashita, written by Konoe.

Reborn to Master the Blade: From Hero-King to Extraordinary Squire – Adapted from the light novel and manga written by Hayaken, the anime series from Studio Comet finds Inglis, who is reborn into a beautiful girl, now free from a king’s burden and is being raised by renowned knights and begins focusing on mastering the martial arts.

A new trailer and key visual for Reborn to Master the Blade: From Hero-King to Extraordinary Squire has debuted, and the series will arrive on Crunchyroll this January. 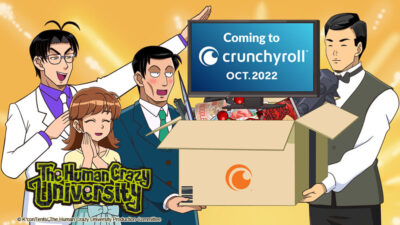 The Human Crazy University – Coming this October, Crunchyroll will take audiences to the The Human Crazy University, where Satake Hirofumi, an “Undeadman” on death row, is sent for the murder of his fiancée and who has survived many desperate situations. Truth of his immortal life will be revealed that will unveil a much bigger conspiracy, which was teased in a new trailer and key visual. 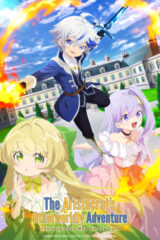 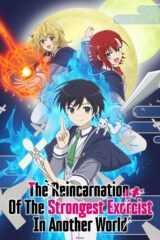 The Reincarnation of the Strongest Exorcist in Another World – The story of an unrivaled genius exorcist, Haruyoshi Kuga, begins as he seeks to find happiness in a new fantasy world he reincarnates himself into. Adapted from the light novel and manga series written by Kiichi Kosuzu, the new anime series from Studio Blanc has released a new teaser trailer and key visual, as it’s set to release on Crunchyroll this January.

Reborn as a Vending Machine, I Now Wander the Dungeon – What would you do if you couldn’t move or speak and were stuck in a dungeon, only to find out you’ve been turned into a vending machine? This anime series adaptation of the work by writer Hirukuma comes to Crunchyroll to answer that question. Discover the world of Boxxo in the brand new teaser trailer.

Our Last Crusade or the Rise of a New World Season 2 – The much anticipated sequel from studio Silver Link is coming to Crunchyroll. A Season 1 recap trailer was shared during the panel with the English dub actors along with a new teaser video. A message from the Season 2 director, Yasufumi Soejima was also shared:

“Alice and Iska. They are the best rivals who respect each other and improve each other, and the ‘tension and tenderness’ of their relationship is an irresistible attraction! The delicate yet bold drama and worldview that unfolds from there! I am very happy to be involved in the creation of the anime Our Last Crusade. We have been communicating with the original author, Sazane-sensei, and have carefully and meticulously worked out the details of the project to produce a film that will be enhanced as a visual work. Please look forward to it!” 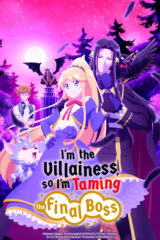 I’m the Villainess, So I’m Taming the Final Boss – Arriving this fall to Crunchyroll, from Maho Film and directed by Kumiko Habara, the anime adaptation of the series written by Sarasa Nagase, follows Aileen Lauren Dautriche who recalls her previous life and discovers she’s in an otome game entitled, “Regalia of Saints, Demons and Maidens,” where she is the villainess who gets in the way of the main character’s romance. But Aileen, knowing the outcome of the game, has other plans for her fate. A new key visual and trailer were unveiled for this title.

The tale of outcasts recently announced that it would be heading to Crunchyroll and now a release date of January 2023 has been revealed along with a brand new trailer debut as well as staff and cast details:

Those who can’t make it to the panels or attend Crunchyroll Expo can watch the livestream on CrunchyrollExpo.com, catch up on panels through the Video on Demand section, and follow all of the exciting highlights on Twitter, Instagram and TikTok, as well as Crunchyroll News where fans can expect to find all the great announcements from each day and so much more.