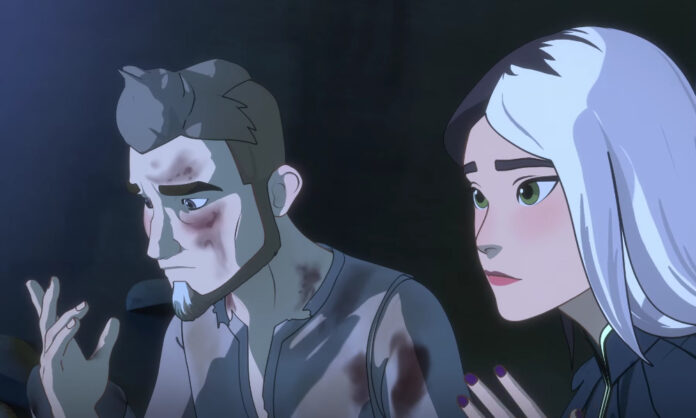 The Dragon Prince returned to San Diego Comic-Con Thursday with a panel previewing the upcoming Season 4 (a.k.a. Book Four; Earth), the first season in the next phase of the saga, “Mystery of Aaravos.” The adventure continues this November with nine new episodes on Netflix.

The new multi-season “Mystery of Aravos” arc will see the enigmatic Startouch elf, Aaravos, take center stage, staking his claim to the magical world of Xadia after centuries of careful planning.

Synopsis: It’s been two years since the Battle of the Storm Spire in Season 3. Peace has been restored throughout the lands but tensions persist between the human kingdoms and Xadia.

With Amaya at her side, Janai must rebuild the Sunfire elves from the ashes of the Corrupted Core. Ezran has fully stepped into his role as king of Katolis, protected by both Soren and Corvus as his Crownguard. Zym is no longer just a hatchling. Callum has replaced Viren as High Mage. And Rayla has since left Callum in search of Viren, her whereabouts unknown…

In Season 4, we see Aaravos’ plans begin to take shape. Under Aaravos’ guidance, Claudia has resurrected her father, Viren, at great cost to herself, but he only has 30 days to live unless they free Aaravos from his mysterious prison.

Claudia will stop at nothing to unearth the long-lost location of Aaravos’ prison in order to save her father, while our heroes must race against time to stop her from unleashing the dangerous Startouch elf on the world…

Season 4 introduces Earthblood elves for the first time, including a new character — the affable and very loveable Terry — and a new environment, the Drakewood. Many more adventures, mysteries, friends, foes and (of course) dragons await!

The Dragon Prince is produced by Wonderstorm, led by co-creators Ehasz and Richmond. It premiered globally on Netflix in September 2018 and immediately topped popularity lists across Rotten Tomatoes, Fandom and Tumblr. It was quickly renewed for second and third seasons, which premiered in 2019. In 2020, Netflix took the unprecedented step of renewing the series for four additional seasons. With this multi-season renewal, Netflix committed to fully realize the creators’ vision for the seven-season Saga.

The Dragon Prince won the 2020 Emmy Award for Outstanding Children’s Animated Series and has been a “Top 10 Digital Original” for all of its season runs. Forbes named it one of the best fantasy shows on TV and all three seasons have a 100% Fresh rating on Rotten Tomatoes.