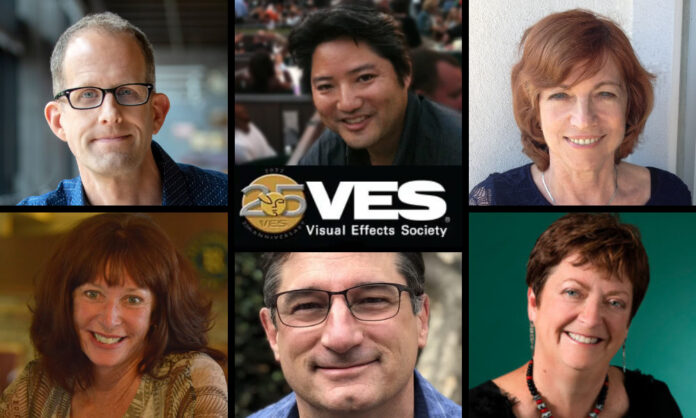 Today, the Visual Effects Society (VES), the industry’s global professional honorary society, announced the Society’s newest Lifetime and Honorary members and this year’s recipient of the VES Founders Award. The honorees will be celebrated at a special event in October.

“Our VES honorees represent a group of exceptional artists, innovators and professionals who have had a profound impact on the field of visual effects,” VES Board Chair said Lisa Cooke. “We are proud to recognize those who helped shape our shared legacy and continue to inspire future generations of VFX practitioners.”

Founders Award recipient and Lifetime VES Member: Pam Hogarth, for her sustained contributions to the art, science or business of visual effects and meritorious service to the Society. During her more than 35 years in visual effects and high-end computer graphics, Hogarth fulfilled many roles, from marketing to industry relations. The majority of her career was dedicated to incubating and growing educational programs geared towards training people for careers in entertainment production. Hogarth also consulted for organizations and schools, coached entertainment professionals on career management and taught.

Before co-founding Eido, a training company that facilitated training for IATSE creative guilds, which was successfully sold in 2017, Hogarth was publicist for VFX house LOOK Effects. As Industry Liaison she helped build Gnomon School of Visual Effects into the premiere school for careers in digital production. She ran Digital Media Institute (DMI) in Hollywood and helped grow the digital program at The American Film Institute (AFI). Teaching experience includes Art Directors Guild, Otis College of Art and Design, cgsociety.org, Gnomon, DMI and AFI.

Hogarth has been extremely active in the Visual Effects Society, including serving eight terms on the Board of Directors, twice elected as the first female Vice Chair and Chair of the Education Committee. She also served as Secretary of the Los Angeles Section of VES. Now retired, she is Board President for the Elite Theatre Company in Oxnard, Calif. and is Secretary of the Greater Los Angeles Spinning Guild.

Lifetime VES Member: Jeff Barnes, for meritorious service to the Society and the global industry. Barnes is an entertainment and technology creative executive who continues to make marked impacts across Silicon Valley and Hollywood. As the Executive Vice President of Creative Development at Light Field Lab, he drives cross-channel marketing initiatives and content creation for the company’s groundbreaking SolidLight™ holographic display platform. Prior to Light Field Lab, Barnes produced the world’s first high-resolution light field short with hand cast academy award-winning team as Executive Director of Studio Productions at Lytro.

Named one of the top 200 creative people in the world by Entertainment Weekly, Barnes previously co-founded and led powerhouse entertainment and visual effects companies, including CaféFX, The Syndicate and Sententia Entertainment. Barnes has been a longtime leader of the Visual Effects Society, serving as Chair and Vice Chair of the global Board of Directors and Co-Chair of the VES Summit.

Lifetime VES Member: Patricia “Rose” Duignan, for meritorious service to the Society and the global industry. Duignan started working in visual effects on Star Wars. She worked her way up the production ladder from Production Assistant to Production Supervisor on Return of the Jedi. Duignan was the first Marketing Director at ILM, where she served for more than a dozen years. In addition to ILM, Duignan has contributed her marketing, sales and executive producing roles at Tippett Studio, ABC TV, Rhythm & Hues and Kerner Optical (a spinoff from ILM’s practical effects departments). She is also the Co-Author of Ballantine’s coffee table book entitled ILM: Into the Digital Realm.

Duignan’s greatest claim to fame is her commitment to families, illustrated by the fact that she started the ILM Daycare Center in 1990, which is still operating (with a wait list) today. She continues to play a role to uplift women, people of color and veterans in the visual effects world through her strong service on the Visual Effects Society’s Education Committee.

Lifetime VES Member: Toni Pace Carstensen for meritorious service to the Society and the global industry. Recipient of the 2017 VES Founders Award, Carstensen is a founding member of the Visual Effects Society — joining the organization as member 0004 and serving as the Society’s first Treasurer. She was a founding member of the Executive Committee and served on the global Board of Directors for many years, as well as Co-Chair of the Global Education Committee, co-editor of the first edition of the VES Handbook of Visual Effects and with the Education Committee, generated the concept for VESAGE — a book showcasing the personal art of VES members.

Carstensen serves as longtime Chair of the Vision Committee, which continues to engage with frontiers including VR/AR and holograms, and Treasurer of the Los Angeles Section. Her feature credits include VFX producer/digital production manager on Avatar, Minority Report and Fantasia 2000.

Lifetime VES Member: David Tanaka, for meritorious service to the Society and the global industry. Tanaka is an editor, producer and creative director with experience ranging from visual effects and animation, to documentary and live action feature films, with over 25 years of contributions to the entertainment industry. For 15 years, he served at Industrial Light & Magic in VFX Production and VFX Editorial on films including Jurassic Park, Forrest Gump and Star Wars. He then went onto Pixar Animation Studios as a Special Projects Editor for 10 years.

Tanaka currently holds a staff VFX Editor position with Tippett Studio and serves as an Adjunct Professor for the Academy of Art University, San Francisco. Tanaka has served three terms of Chair of the VES Bay Area Section, as well as 2nd Vice Chair on the global Board of Directors. He is also a major contributor to the VES Archives, Awards, Outreach and Work From Home Committees.

Honorary Member: Pete Docter. Docter is the Oscar-winning director of Monsters, Inc., Up, Inside Out and Soul and Chief Creative Officer at Pixar Animation Studios. Starting at Pixar in 1990 as the studio’s third animator, Docter collaborated with John Lasseter and Andrew Stanton in developing the story and characters for Toy Story, Pixar’s first full-length animated feature film, for which he also was supervising animator. He served as a storyboard artist on A Bug’s Life, and wrote initial story treatments for both Toy Story 2 and WALL•E. Aside from directing his three films, Docter also executive produced Monsters University and Academy Award-winning Brave.

Docter has been nominated for nine Academy Awards and won three, including Best Animated Feature-winners Up, Inside Out and Soul, and Best Original Screenplay nominations for Up, Inside Out and WALL•E.  He has garnered two VES Awards — for Outstanding Animation in an Animated Picture for Up and for Outstanding Visual Effects in an Animated Feature for Soul.

The Visual Effects Society is a professional global honorary society dedicated to advancing the arts, sciences and applications of visual effects and to upholding the highest standards and procedures for the visual effects profession. It is the entertainment industry’s only official organization representing the extended global community of visual effects practitioners, including supervisors, artists, producers, technology developers, educators and studio executives. VES’ nearly 4,500 members in 45 countries worldwide contribute to all areas of entertainment — film, television, commercials, animation, music videos, games and new media.