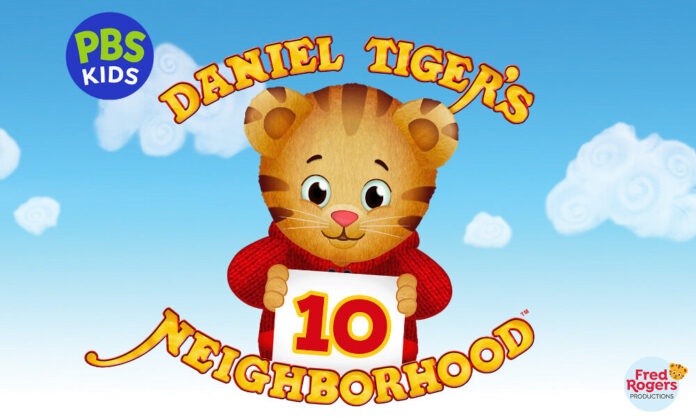 PBS KIDS and Fred Rogers Productions announced today that Daniel Tiger’s Neighborhood, the #1 animated series for preschoolers on PBS KIDS and first series inspired by the groundbreaking Mister Rogers’ Neighborhood, will kick off its 10th anniversary year on September 3 with a marathon of “Top Ten Tiger Tales” on PBS KIDS.

The special programming event was voted on by fans and will lead into the highly anticipated sixth season, featuring a week of all-new episodes, streaming free on PBS KIDS beginning September 5.

“Since its launch a decade ago,Daniel Tiger’s Neighborhood, with its iconic strategy songs and gentle life lessons, has become an integral part of life for preschoolers, parents and caregivers,” said Sara DeWitt, Senior Vice President and General Manager, PBS KIDS. “We’re delighted to help children continue to learn and grow alongside their favorite tiger with a whole new season, digital games and more.”

“For the last 10 years, we’ve been honored to hear from families everywhere about the impact that Daniel Tiger’s Neighborhood has had on them personally,” said Paul Siefken, President and CEO, Fred Rogers Productions. “We are thrilled to continue to support preschoolers as they learn along with Daniel and to further the enduring legacy of Fred Rogers for another generation of children.”

Families are invited to “hop aboard” Trolley for a weekend of special anniversary programming featuring favorite movies like Daniel Tiger Visits a New Neighborhood and Won’t You Be Our Neighbor? “Top Ten Tiger Tales,” a five-hour marathon, will showcase 10 fan-chosen episodes from over the years – including the very first story, “Daniel’s Birthday”; classics such as “The Baby is Here” and “Daniel Visits the Doctor”; and newer favorites like “Daniel’s New Friend Max.”

The 10th anniversary celebration continues with the launch of Season 6 on PBS KIDS with four exciting new episodes that will showcase more preschool “firsts” such as having a new babysitter, going to a sleepover and trying a new activity. The episodes will feature fresh strategy songs to help families navigate these relatable situations and more. The full season will include 18 new 30-minute episodes. Full programming details are included below.

Series-inspired activities and resources that extend the fun and learning for “little tigers” and their families nationwide will also roll out on pbskids.org/daniel and the free PBS KIDS Games app, including Daniel Tiger’s Nature Walk, an all-new digital game that will debut in September. Kids and families can continue to play and learn with Daniel as they discover all the interesting things there are to see outside.

In addition, several new and exciting Daniel Tiger’s Neighborhood products will be released to celebrate the anniversary at the end of August. Jakks Pacific will be launching the “Cuddle Up Daniel Tiger” plush, while Simon & Schuster will release the new board book, I Will Always Be Your Friend!, written by series creator Angela C. Santomero. Pact Organic will also be launching Daniel’s Red Sweater to mark the anniversary—the first time Daniel’s iconic red sweater will be offered at retail.

When it debuted on PBS KIDS in 2012, Daniel Tiger’s Neighborhood, the first original show from Fred Rogers Productions since Mister Rogers’ Neighborhood, brought the children’s television pioneer’s legacy to life for a whole new generation of young viewers. Every episode of the well-loved series showcases two distinct stories starring four-year-old Daniel Tiger and his friends, who invite viewers to join them as they explore the colorful Neighborhood of Make-Believe. Irresistible musical strategies reinforce the unique theme of each show; preschoolers and parents can sing along and incorporate them into their daily lives.

The series has garnered a host of prestigious awards, including a 2019 Daytime Emmy Award for Outstanding Preschool Children’s Animated Series, 2020 Parents’ Choice Gold Award for Television, 2018 Common Sense Media Seal of Approval and the Outstanding Achievement in Youth Programming by the Television Critics Association in 2016.