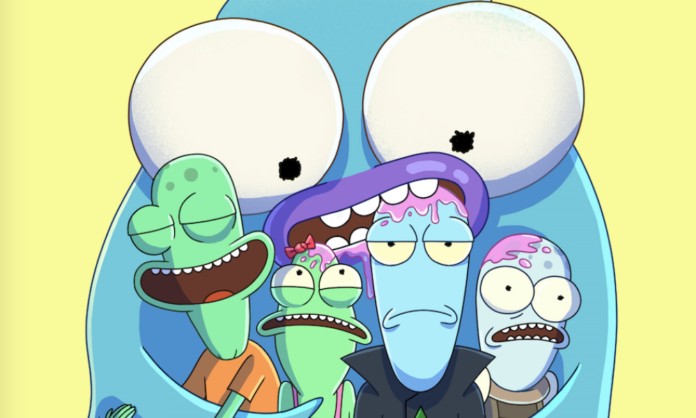 Hulu has debuted the official trailer and key art for the third season of Solar Opposites The series returns to Hulu on Wednesday, July 13th with eleven episodes.

Co-created by Justin Roiland (Rick & Morty) and Mike McMahan (Rick & Morty, Star Trek: Lower Decks), “Solar Opposites” follows the wild and crazy adventures of four aliens who are evenly split on whether Earth is awful or awesome. Korvo (Justin Roiland) and Yumyulack (Sean Giambrone) only see the pollution, crass consumerism, and human frailty while Terry (Thomas Middleditch) and Jesse (Mary Mack) love TV, junk food and fun stuff. In season three, this alien team strives to be less of a team and more of a family team.

In the trailer, we see Korvo telling the others and reminding viewers that a third season is on the way. Terry and Korvo find out about Yumyulack’s human shrinking habit, which poses a few questions as to whether the humans will finally be freed or continue living in their miniature city. Korvo also decides to tells the others that they’re a family

Solar Opposites is executive produced by Justin Roiland, Mike McMahan and Josh Bycel. The series is produced by 20th Television Animation.  All 11 episodes of the third season will stream on Hulu on July 13. Seasons 1 and 2 are available to stream now. The show has a glorious 96% rating on Rottentomatoes.com.

Check out the Season 3 trailer below: