Kids’ entertainment specialist CAKE (cakeentertainment.com) announced its partnership with award-winning Slovenian production and animation studio Invida on the brand-new CG buddy comedy The Lost Bots. Developed by Invida, the 78 x 7′ non-dialog series will be produced together with CAKE Productions. The 3D animation will be produced with a hyperreal look, powered by cutting-edge Unreal Engine Technology.

Celebrating discovery, adventure and appreciation of nature and community, The Lost Bots tells the story of the comically misguided efforts of two lost alien robots, Red and Blu, who are forced to make a deserted tropical island their cast away home after crash landing on planet Earth. In contrast to their home on Planet Neon, which is only populated by machines, there is no trace of technology here and they will need to work together, in order to live, thrive and survive in this strange environment; whilst learning about nature and befriending (and sometimes running away from) all kinds of creatures along the way!

Boutique distribution powerhouse Toon2Tango has partnered with Baboon Animation (baboonanimation.com), a leading global developer of kids’ and family entertainment comprising a team boasting 31 Emmy Awards collectively, to launch a new animated comedy series, Bek and the Bunnies. The zany stories will be aimed at a bridge preschool audience.

Remarkably, two seven-year-old girls created the designs for the series, as part of a toy line of collectibles they developed called “the Cuties.” Toon2Tango’s Jo Daris explained, “The girls were trying to design their own dream toys that they wished their mom and dad would buy them. So, you can’t get more on target than that.”

The bunnies (and the whole build-your-own Cuties line) are a new spin on Mr. Potato Head . It’s a toy that celebrates inventiveness. Similarly, Bek, the series’ lead character, is an inventor. The series was developed by the DreamWorks alumni trifecta of Mike de Seve, Joe Vitale (Super Wings, Angry Birds) and John Reynolds (Mr. Peabody & Sherman), in close cooperation with the team from Toon2Tango.

“It was a remarkable fit, we simply cleaned up the actual drawings done by the girls,” said Baboon founder Mike de Seve. “Then our comedy team took the bunnies from drawings to so much more: they are adorably squishy, bouncy, huggable, critters that happen to have incredible robot powers.”

“Since I was never in Sweden in 1971 and haven’t ever met Thåström, I am obviously intrigued to find out what we never did,” commented Cave.

Before They Were Gods is a story of a friendship between the two stars as young teenage boys, both completely unaware they will turn into major rock gods in just a few years. The series is about their search for the ultimate truth, everlasting beauty, and cheap wine. Sometimes they find it, but mostly not. Always there, close to them both, is the promise of endless love in the form of the mysterious and beautiful Linnea who they have both deeply fallen for.

At just 14, they speak like idealistic adults with a discourse bordering on the philosophical. Thåström is a harsh existentialist, political and speaks succinctly. Cave is the opposite, a struggling Dionysian agnostic, and a romantic dreamer who swims in words. With an artistic style inspired by Swedish comic books, the show is set in Sweden, but all dialog is in English.

Mårlind explained, “This is a dream project that literally came to me in a dream. While asleep, I watched two of my musical heroes as young teenagers, drinking cheap beer while discussing love and the meaning of life. I woke up writing and have been trying to catch up with them ever since.”

A new project from storyteller Laura Henry-Allain MBE (the inspiration behind CBeebies hit JoJo and Gran Gran) has been awarded development funding from the U.K. Government-backed Young Audiences Content Fund (YACF), which is managed by the BFI to bring new material to audiences 18 and under for regulated TV channels and online platforms.

Daddio & Co is an inspiring, warm-hearted 2D comedy series for a pre-school audience featuring a modern Black-British family. It follows journalist Dad, affectionately known to his family as “Daddio” and his lively sons Louis (6) and Quincy (4) as they navigate childhood from different perspectives: Quincy is neurotypical and Louis is autistic. Mum, who is American, is also present and is a dynamic working mother who spends much of each episode at work as a barrister.

Louis and Quincy approach life as opposites but always find a way to work together; they don’t always realize how to until Daddio gives them a nudge in the right direction. As a unit, the family are artsy, musical, and sporty. The show highlights the bond Daddio has with his sons as they navigate daily life with fun, warmth, humor and above all, with love.

“Daddio & Co started off as small seed of an idea six years ago when I reflected on the intersectionality of how disability and Black U.K. families show up in the media, books and television,” said Henry-Allain. “I looked at my own family, my son who is autistic, and especially how Black men and dads are depicted either negatively or not at all. I wanted to show the joy and love that is not often seen on TV and show Black men positively as fathers. I also wanted to examine the social model of disability within a Black family. The audience will love the warmth, closeness and the many comedy elements that Daddio & Co illuminates as a fun-loving family.” 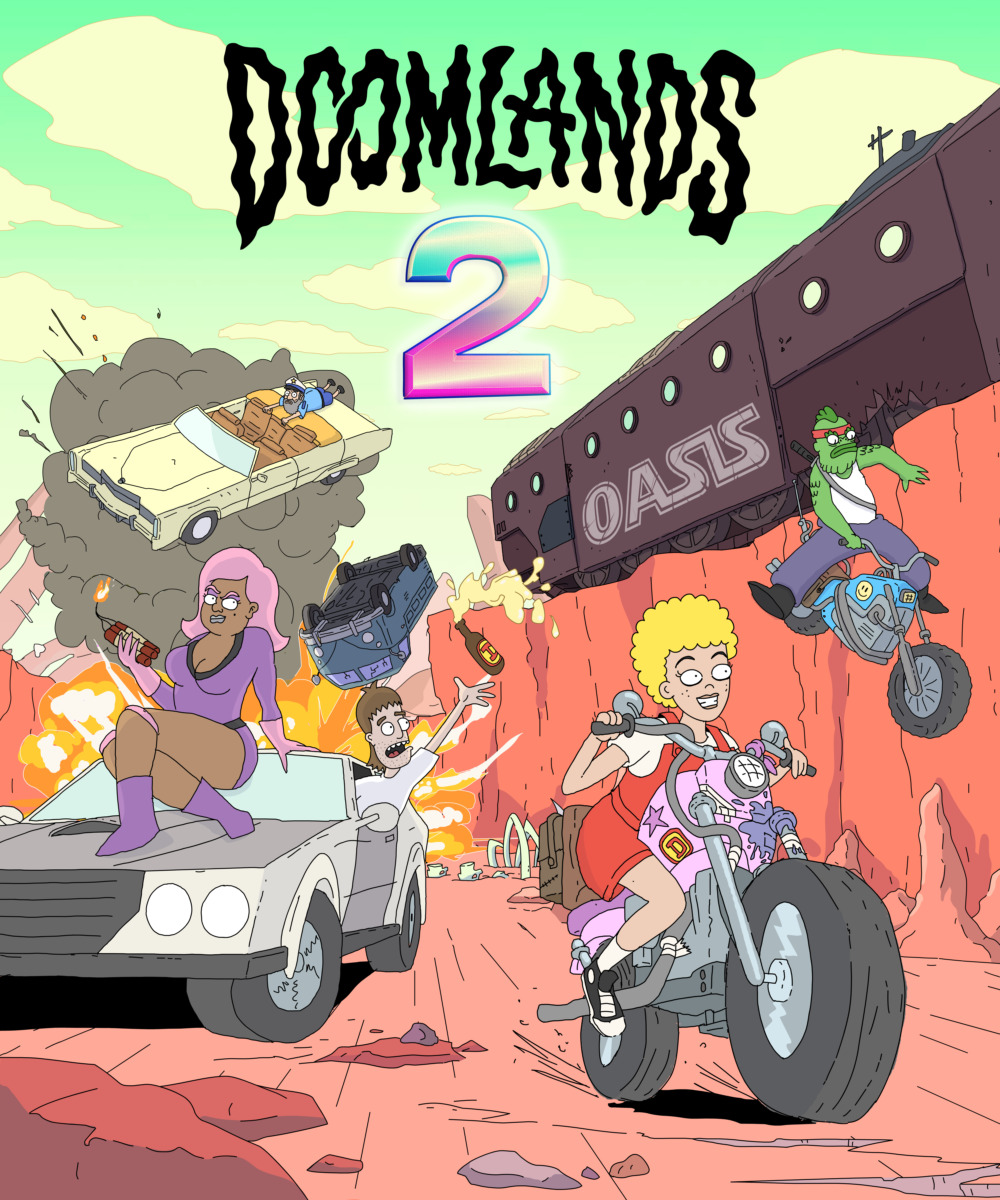 The Roku Channel announced that Roku Original scripted animated series Doomlands will return for Season 2. The second 10 x quarter-hour season will be a continuation of S1, inviting audiences along for more adventures with the infamous Danny Doom and aspiring bartender, Lhandi, as they sling beers across a hellish wasteland in their mobile pub: The Oasis. Facing ruthless desert gangs, memory-stealing creeps, and even mean bathroom graffiti, all this crew’s got to do to survive is not kill each other

Comedy Central has launched a new three-part digital animated series, Maurice on Mars. The series follows Maurice Robinson, a 25-year-old Black struggling artist-who happens to work minimum wage at a coffee shop on Mars. The Martian colony is supposed to be a utopia, yet old Earth problems still manage to pop up in the cafe, sometimes as fierce debates, and other times as fist fights. Each episode follows Maurice just trying to get through a day of work on a planet far away from home.

The series, made in partnership with Cartuna, was written and created by comedian Tim Barnes (The Tonight Show Starring Jimmy Fallon), and features a cast including Lori Beth Danberg (All That), Clare O’Kane (Shrill), Dwayne Kennedy (How High, Martin). The first episode premiered Friday, June 10 on CC’s Animated YouTube and Facebook. Episodes 2 and 3 will become available on Friday, June 17 and Friday, June 24. Watch the first episode below!