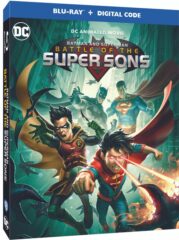 Legacies must rise to unearthly challenges as the children of Batman and Superman are charged with saving their famous fathers – and the world – in Batman and Superman: Battle of the Super Sons. Warner Bros. Animation’s first-ever all-CG animated, feature- length film will be available from Warner Bros. Home Entertainment on 4K Ultra HD Blu-ray Combo Pack (SRP $29.99 U.S.; $34.99 Can.), Blu-ray (SRP $24.99 U.S.; $29.99 Can.) and Digital on October 18.

Produced by Warner Bros. Animation, DC and Warner Bros. Home Entertainment, the PG-13 rated movie begins as 11-year-old Jonathan Kent discovers he has superpowers, thrusting the half-Kryptonian into the complicated world of Super Heroes and Super-Villains – who are now under attack by a malevolent alien force known as Starro! It’s a race against time as Jonathan must join forces with assassin-turned-Boy Wonder Damian Wayne to rescue their fathers (Superman and Batman) and save the planet by becoming the Super Sons they were destined to be! 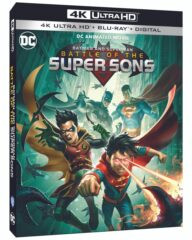 The 4K, Blu-ray and Digital releases include the brand-new featurette, Rival Sons: Jonathan and Damian: Legacies collide as Jonathan Kent and Damian Wayne set aside their differences, forming an unlikely alliance to save the world.

Fans can catch up with the expansive canon of popular DC Universe Movies, DC Animated Movies and many other animated DC films and television series streaming on HBO Max.