Annecy Festival attendees were today treated to a first look at The Spot, a new villain in Sony Pictures Animation’s two-part sequel Spider-Man: Across the Spider-Verse, set to be voiced by Wes Anderson favorite Jason Schwartzman. Described as “Miles Morales’s most formidable foe yet,” the character has super-powered spots on his body that can send him into any dimension he chooses.

Across the Spider-Verse Parts 1 & 2 will follow Marvel hero Miles Morales/Spider-Man (Shameik Moore) and Gwen Stacy/Spider-Woman (Hailee Steinfeld) on an adventure across the multiverse, meeting a new roster of interdimensional Spider-People (including Oscar Isaac as Spider-Man 2099 and Issa Rae as Jessica Drew/Spider-Woman). Joaquim Dos Santos, Kemp Powers and Justin K. Thompson direct from a screenplay by producers Phil Lord & Chris Miller and David Callaham.

Meet The Spot, Miles Morales’s most formidable foe yet. ? Voiced by Jason Schwartzman, see him in action in Spider-Man: Across the #SpiderVerse, exclusively in movie theaters June 2, 2023. pic.twitter.com/1aAmMjMcpX

In addition to his many live-action credits, Schwartzman has also provided voices for the animated features Fantastic Mr. Fox, My Entire High School Sinking into the Sea, Klaus and Sing 2, and was a story co-writer on Anderson’s Isle of Dogs.

The United Arab Emirates has banned Disney-Pixar’s much-anticipated feature Lightyear from screening in because it features characters in a same-sex relationship. According to Reuters, the film would not be licensed for screening in the country as it violated the nation’s media content standard, the Ministry of Youth and Culture’s media regulatory office wrote on Twitter.

The country’s Media Regulatory Office executive director Rashid Khalfan Al Nuaimi told Reuters the film was banned because of the inclusion of homosexual characters in several scenes. Same-sex relationships are criminalized in the U.A.E., and some other Muslim-majority countries. An Arabic hashtag calling for the film not to be shown in the U.A.E. was trending on Twitter last week.

Directed by Angus MacLane, the movie features Chris Evans as the voice of Buzz and Uzo Aduba as Alisha Hawthorne. Aduba’s character is an astronaut who is married to another woman, whom she kisses in the film. The kiss had been cut earlier from the film, but it was restored after Pixar and Disney employees protested against the move in the aftermath of the studio’s response to Florida Gov. Ron DeSantis’s controversial and discriminatory “Don’t Stay Gay” bill. Lightyear opens in theaters nationwide this Friday (June 17). 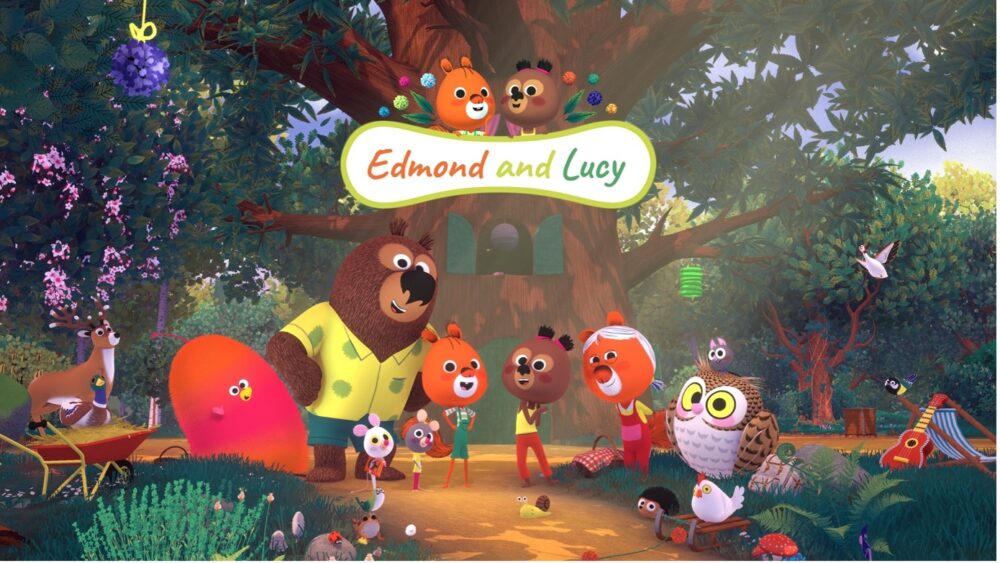 French studio MIAM! animation has announced its first series, Edmond and Lucy (52 x 12′), is set to premiere on Okoo in July and on France 5 in Setpember. Produced with the participation of France Télévisions and HR/KiKA in Germany, the eco-conscious show is being sold internationally by MIAM! distribution, and has already been picked up by RTS (French-speaking Switzerland), VRT (Flemmish-speaking Belgium), TV5 Monde (French-speaking world, exc. Canada), SVT (Sweden), SYN (Iceland), PULS (Poland), MTVA (Hungary), LTV & LMT (Latvia) and RTVS (Slovenia).

This new preschool series is an adaptation of the picture book collection Edmond and Friends by Astrid Desbordes and Marc Boutavant, published by Nathan, translated into 15 languages and sold in 20 countries. The show aims at reconnecting children to the forest throughout the four seasons as they join Edmond the squirrel, Lucy the bear cub and their friends on their daily adventures in the great outdoors: Nature is their best playmate!

Each episode has been written in collaboration with three expert naturalists: Louise Browaeys, agronomic engineer, CSR expert and author; Gaëlle Bouttier Guérive, author and head of the education department at the NGO Under the pôle; and Didier Moreau, naturalist, ethnobotanist and specialist in experimental ecology. Edmond and Lucy is produced by French studios MIAM!, Jungler and Artefacts. 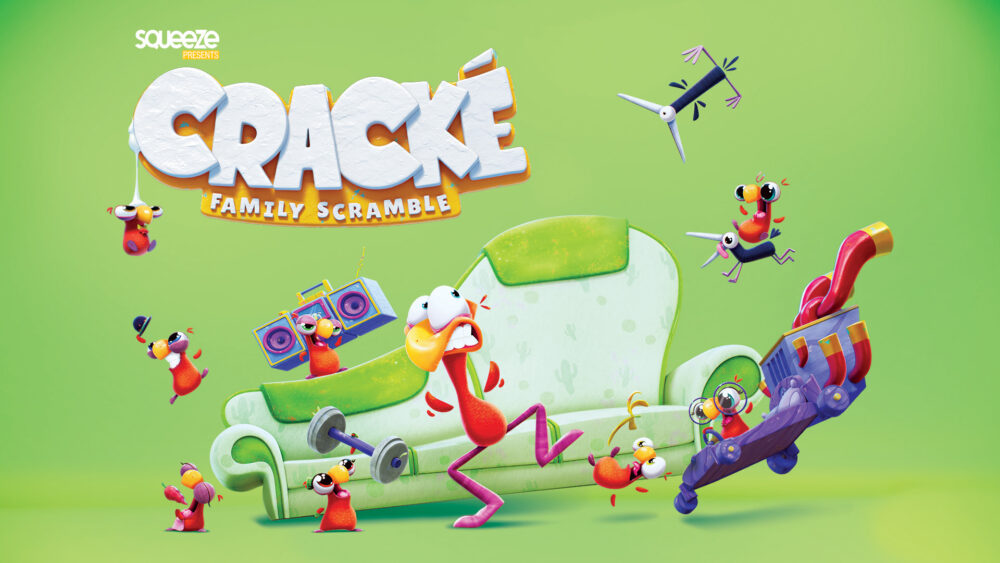 Squeeze announced its all-new original animated series, Cracké Family Scramble, with a new teaser and the debut of two full episodes at Annecy’s MIFA market on Wednesday. Cracké features Ed, an overprotective, single dad ostrich striving to be a good parent to his eight newly hatched kids.  Squeeze has teamed up with Aniventure for the production and distribution of the new show, which will be available to broadcasters on July 2022.

In Cracké Family Scramble, single dad Ed’s troubles have multiplied eight-fold now that his octuplets have hatched. His lack of experience, overprotective instincts, and woeful problem solving skills turn every family activity into an unpredictable adventure.

“Each of Ed’s adorable eight babies has their own personality that sets off a myriad of hilarious situations. We know that these irresistible characters will connect with kids around the world,” said Chantal Cloutier, Head of Squeeze Originals. “We also introduced the Crows. This wacky gaggle of birds adds even more comedy to the mix by compounding Ed’s already sizable challenges!” she added. The talented artists at Squeeze have also visually enhanced the animation look and style of the show to delight cartoon fans of all ages.”

The production is made possible with the partnership of Télé-Québec, and the collaboration of SODEC, the Government of Canada, the Québecor Fund, the City of Quebec, Quebec’s Ministry of Culture and Communications, as well as the Secrétariat de la Capitale-Nationale.

The Goode family, like all other families, are doing their best to juggle everyday life. Only in their house, there’s always someone else – or rather something else – to reckon with. Talking appliances, furniture and toys with strong opinions and desires. Kylo, who has ADD, finds it hard enough to concentrate without every item in the house voicing their thoughts and opinions. Luckily, he has enough sense of humor and resourcefulness to navigate any wacky and unexpected situation. Like that time his tablet ran away from home following an argument over screen time. Or that day his own bed insisted that he slept on the floor when he refused to take a shower after soccer practice.

Supported by the Région Auvergne-Rhône-Alpes, the Département de la Haute-Savoie, the DRAC Auvergne-Rhône-Alpes, the CNC, Netflix and CITIA, the program dedicated to animated feature film graphic development will kick off its next edition on April 3, 2012, providing space, mentorship and assistance to creators for three months at the Papeteries – Image Factory. Applications are open until September 9, 2022. More info here.

Bardo tells the story of a young Irish woman living in Dublin who lives a non-stop, partying lifestyle before reconnecting with home and looking towards a more sustainable way of living. The story is inspired by nature and the simpler, idealised way of living embodied by the woman’s grandmother. The film is produced by the award-winning animation studio And Maps And Plans with a crew of emerging Irish talents such as  Conroy, Lennon and lead animator Cora McKenna.

‘’It is a great privilege to be included at such a historic and important film festival,” said Conroy. “Bardo has been a real labour of love for all of us involved in the production, and I couldn’t have asked for a better team to help bring my vision for it alive.’’

Lennon added, ‘’The world’s best filmmakers have had their films shown at the Tribeca Film Festival over the years and it’s a true honour to have Bardo join that list. Everyone involved in the production has worked so hard on it and it is a great thrill to see it rewarded and respected by the international film community is amazing.’’ 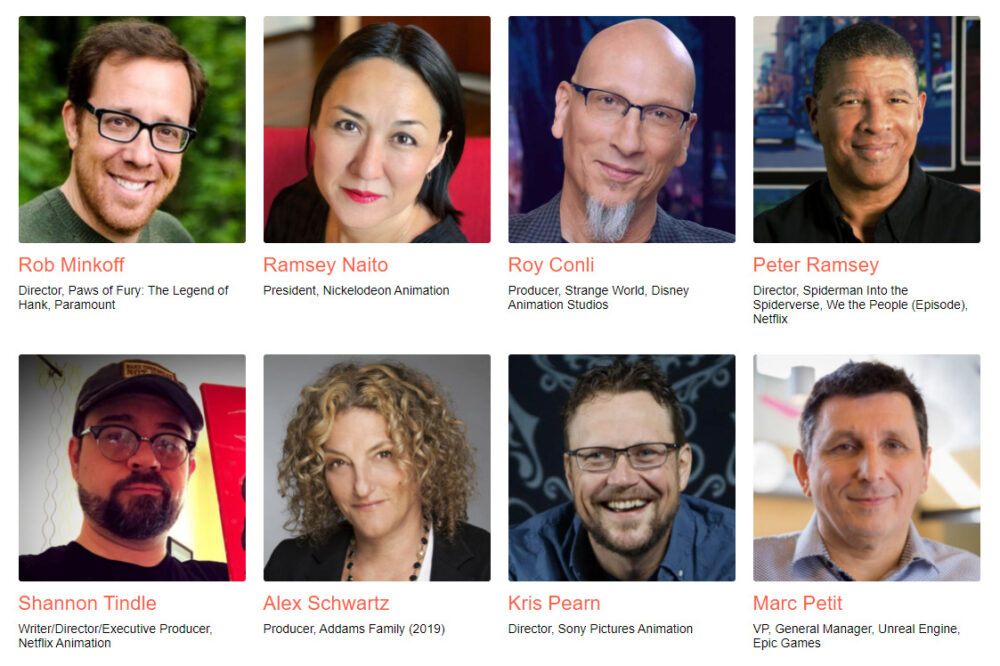 VIEW Conference announced the first speakers for its 2022 edition, a global event in English happening both online and in-person in beautiful Torino, Italy from October 16-21. Last year’s edition had over 290 speakers, so stay tuned for more announcements coming soon. Tickets are now available with early bird pricing.

Two highlights for VIEW Conference 2022 include a special summit on the Metaverse and a focused conference track on the groundbreaking field of virtual production.  The first batch of confirmed speakers includes: