… Just a few more happenings that caught our attention today! Let’s dive in, shall we?

VFX and animation studio DNEG (dneg.com) announced today that Erika Burton will join its DNEG Animation arm as President. Burton joins the division to support its rapid growth and development, and will share both the President title and leadership responsibilities with Tom Jacomb, promoted last year. She previously served as President of VFX Production at DNEG.

Burton has prior animation industry experience from stints at both Disney Animation and DreamWorks. Her focus at DNEG Animation will be on production, resource management, training and operations, working in lockstep with Jacomb, who will focus on creative, client management and outreach, and the development of IP and original content.

In recent years, DNEG Animation has grown from a small team in London to become a global team of approximately 850 employees working across studios in London, Montreal, Mumbai, Vancouver, L.A. and Toronto. The company’s first full-length animated feature, Locksmith Animation’s Ron’s Gone Wrong, garnered multiple Annie Award nominations and won Best Feature at the 2022 British Animation Awards. The studio is currently in production on Nimona (Annapurna/Netflix), Garfield (Alcon/Sony), That Christmas (Locksmith) and a TBA animated series for a major streamer.

“I feel excited and honored to be joining Tom and the DNEG Animation team,” said Burton, who will join in the studio’s sessions on recruiting and introductory spotlight at Annecy on Thursday. “I have been fortunate enough to work with some immensely talented VFX and animation teams during the course of my career, and I love both disciplines equally. There is something really compelling and challenging about animated filmmaking that keeps drawing me back and this is just a tremendous new opportunity.”

New Line Cinema and Warner Bros. Animation have announced the voice cast for the upcoming theatrical anime feature The Lord of the Rings: The War of the Rohirrim.

183 years before the events chronicled in the original trilogy of films,  a sudden attack by Wulf, a clever and ruthless Dunlending lord seeking vengeance for the death of his father, forces Helm Hammerhand, the mighty King of Rohan and his people to make a daring last stand in the ancient stronghold of the Hornburg — a mighty fortress that will later come to be known as Helm’s Deep. Finding herself in an increasingly desperate situation, Hera, the daughter of Helm, must summon the will to lead the resistance against a deadly enemy intent on their total destruction.

Directed by Koji Kamiyama and in production at Sola Entertainment for release on April 12, 2024, the movie will feature Brian Cox (Succession) as Helm, Gaia Wise (A Walk in the Woods) as Hera, Luke Pasqualino (Snowpiercer) as Wulf and LOTR star Miranda Otto reprising her role as the Shieldmaiden Éowyn (the story’s narrator).

This summer is sure to sizzle with the highly anticipated  Season 3 return of Tuca & Bertie on Sunday, July 10 at Midnight ET/PT on Adult Swim and the next day on HBO Max. S3 also makes its debut in Europe, LatAm and Canada throughout July.

The critically acclaimed animated series stars Tiffany Haddish (Tuca) and Ali Wong (Bertie) as colorful bird girl besties who navigate the ups and downs of adulting in life, love and everything in between. Speckle (Steven Yeun) is also there.

“I can’t wait for everyone to catch up on all the latest calamity and soul-searching from these birds,” said series creator and executive producer Lisa Hanawalt. “Season three is packed with romance, chronic pain, ambition, large ducks, lustful trees, and hungry snakes!”

HBO Max has ordered adult sci-fi drama series Scavengers Reign from top-notch studio Titmouse. Set to premiere next year, the series is being unveiled at Annecy this week, and follows the surviving crew of a damaged deep space freighter who are stranded on a beautiful yet unforgiving planet … which they begin to learn the true nature of  as they try to survive long enough for escape or rescue.

GKIDS has unmasked a stunning new preview for Inu-Oh, the latest genre-defying anime feature from visionary Japanese director Masaaki Yuasa (Ride Your Wave, Lu Over the Wall, Mind Game) and his studio Science SARU (produced in collaboration with Asmik Ace). The film is being presented at the Annecy Festival this week, following a world premiere at the Venice Int’l Film Festival and North American premiere at Toronto Int’l Film Festival.

Featuring character design by manga artist Taiyo Matsumoto (Tekkonkinkreet, Ping Pong the Animation), the musical animated feature tells the story of the friendship between the legendary 14th century Noh performer Inu-oh, and the blind biwa player Tomona. As the two rise from hardship to stardom through their creative partnership, they also come to break each other’s curse.

On the bootheels of new production art reveals during the film’s Annecy Festival session, Puss in Boots: The Last Wish has unsheathed a new trailer and official poster! 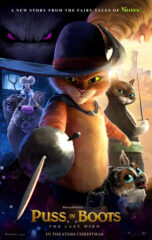 In this spot, we see Puss (Antonio Banderas) attempt to reinvent himself as a mild-mannered, not-constantly-dying house cat at the home of “Mama Luna”. However, he is quickly thrust beck into whisker-curling action when Goldilocks (Florence Pugh) and the Three Bears rumble his hideout, with a scrappy therapy dog (Harvey Guillén) and the inimitable Kitty Softpaws (Salma Hayek).

The long-awaited follow-up to the 2011 Academy Award-nominated blockbuster, The Last Wish is directed by Joel Crawford and produced by Mark Swift, the creative team behind DreamWorks Animation’s smash, The Croods: A New Age. The film’s executive producer is Illumination founder and CEO Chris Meledandri. In theaters Dececmber 22.