One of the upcoming animated features making a big splash at Annecy on Tuesday is director Peggy Holmes’ Luck, which premieres worldwide on Apple TV+ on August 5. The team behind the movie will screen some new footage and talk about the making of Skydance Animation’s first animated feature.

Luck centers on a young girl named Sam Greenfield, who believes she’s the unluckiest person in the world. When she stumbles into the never-before-seen Land of Luck, Sam sets out on a quest to bring some good luck home for her best friend. But with humans not allowed in this world, her only chance is to team up with the magical creatures who live there.

In a special pre-release interview with Animation Magazine, Holmes said she was excited to be working on a completely original property at a brand-new studio. “I’ve been working on this movie for about two and a half years,” she noted. “I was developing a TV series at Skydance when they asked me to come and lead the movie.”

She added, “There were two things that were part of the project that really appealed to me: this idea of Sam having grown up in the foster care system and the other was that a leprechaun was involved. I come from a really big family and belonging to the family is the most meaningful thing in my life, and I could see that creating a story around Sam who has this emotional journey of finding her own family. And the leprechaun! I’m partly Irish and thought I could really blow it up and develop this leprechaun character into a full magical world called the Land of Luck. So, I told them if I could create this deep, heartfelt journey in a super magical world, I’m in. And they said, let’s go!”

Holmes who also directed two Tinker Bell spinoff movies for Disney (The Pirate Fairy, Secret of the Wings) as well as The Little Mermaid: Ariel’s Beginning, added, “I loved my time at Disney. I was an actress, dancer, choreographer and director. Over at Skydance, we are a brand new studio. We get to help build the studio from the ground up. Every day, we are learning something new and everyday it’s super challenging. It was exciting to be working with producers John Lasseter, David Ellison, Dana Goldberg, David Eisenmann and [Skydance Animation president] Holly Edwards and be part of building something from the beginning.”

Having worked with Lasseter on the Tinker Bell movies, Holmes was pleased to be working with the former Pixar and Disney CCO once again. “John is a great mentor, ultra-creative artist and he’s a master storyteller,” she said. “He always has these great ideas and is there when you need him. He’s a partner in the best way: He’ll say come to me with your story problems and I’ll help solve them for you. He’s been very supportive.”

The director mentioned that one of the big challenges of mounting the movie was coming up with a storyline that wasn’t forced and didn’t hit the audiences with its positive message of building your own luck. “Our writer Kiel Murray (Cars 3, Raya and the Last Dragon) and I did a lot of research for the project and we met with these incredible young adults who had also grown up in foster care and had the same experiences at Sam,” recalled Holmes.

“When we spoke to these people, no matter how much bad luck they had had in their lives, they were so positive and kept going. They were so generous at heart and Kiel and I were so moved by their stories. They told us that they didn’t wish bad luck on anyone else and they wouldn’t want to live it again, but looking back, it made them who we were. That’s what Sam needed to learn. We want her to look back at her life and say, ‘What I thought was the worst luck ever, turned out to be the best luck because I finally found my family!’” 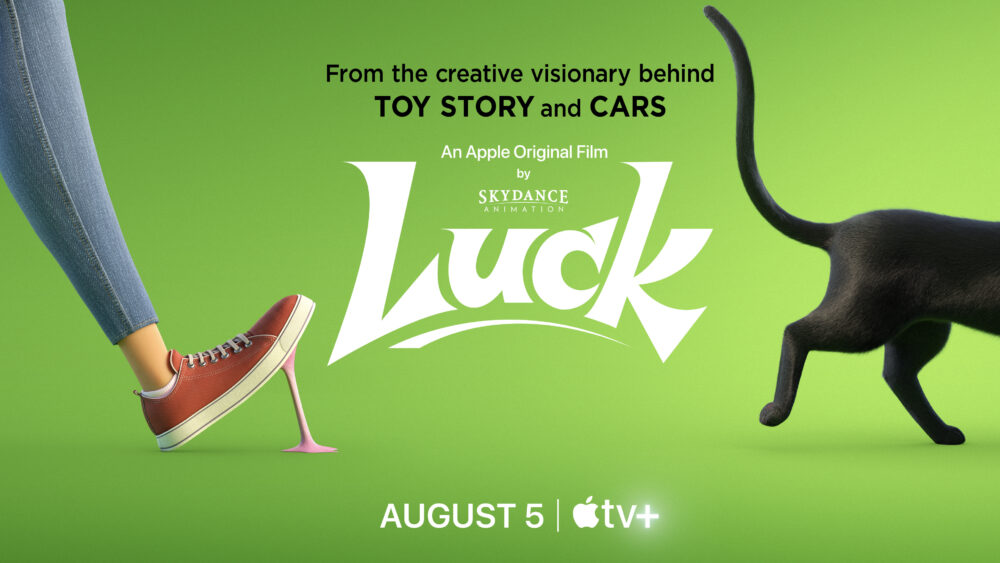 Holmes mentioned that it was a new experience working with the Skydance artists located in three different locations: Los Angeles, Madrid and Connecticut. “We have CG animators, layout and VFX  artists and lighters in Connecticut. We were lucky enough to grab the artists that were available after Blue Sky’s closure in the region.”

Luck premieres on Apple TV+ on August 5. You can read more about the making of the movie in the upcoming August issue of Animation Magazine (No. 322).