Animation Magazine was financed with a crowdsourcing formula 35 years before crowdsourcing became an accepted business practice for raising funds to produce independent projects. It was conceived to celebrate the beautiful art of animated shorts as showcased in the annual International Tournée of Animation.

I love animation. I have worked with animation for 45 years. I produced my first animation course in 1977 as one of the courses offered in a film school I launched in Denver, Colorado, called the Visions Film Program. It is where I fell in love with the art of animation.

Ten years later, in 1987, one of the stand-out highlights of my career was the opportunity to distribute Frédéric Back’s The Man Who Planted Trees to 350 theaters in North America. It was the centerpiece of the 21st International Tournée of Animation. 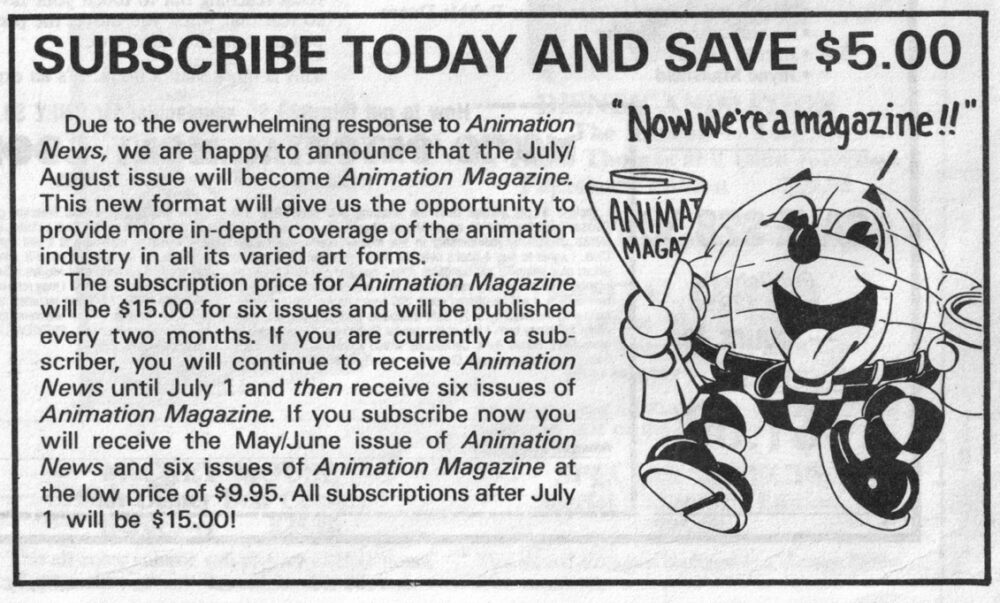 In 1983, I took over the job of producing the International Tournée of Animation from Prescott Wright and Bill Littlejohn. My partners in this venture were Gary Meyer and Steve Gilula, the owners of the Landmark Theatre Corporation. We would test market promotion ideas for our traveling showcase of the world’s best animated shorts in the Landmark Theatres in 26 cities. When we had a marketing formula that worked, we rolled the Tournée out to 325 cities in the U.S. and Canada.

In the fall of 1986, we created a newsprint newsletter called Animation News and distributed it to all of the movie theaters showcasing the International Tournée of Animation. Inside the premiere edition of Animation News, we wrote this introduction:

“During the past year we have received more than 20,000 requests (letters) from people who have seen the 19th Tournée asking for more information on the world of animation. Animation News was created to provide a consistent source of news about the world of animation in all its varied forms. This preview issue is designed to provide a microcosm of what future issues will look like. Its future issues will be more than four pages and include book reviews, film reviews, film festival dates and deadlines, interviews, industry news and in-depth information on the new home video releases. To subscribe, please send us $9.75 for six issues. If we receive enough money we will create an Animation Magazine!”

In 1987, we made this announcement in the Spring edition of Animation News: ”Due to the overwhelming response to Animation News, we are happy to announce that the July/August issue will become Animation Magazine.”

After 35 years of hard work and quality editorial, Animation Magazine has become a global icon and has stood the test of time. It is the only magazine about animation to have survived all of the changes that have affected the entertainment industry and the publishing industry. It is read in 150 countries and the website has been enjoyed by more than one billion viewers!

If we had a window into the future when we laid out our first issue 35 years ago, the vision of the world today would have looked like a science fiction fantasy. My heartfelt congratulations and respect go out to Jean Thoren, Ramin Zahed, Sheri Shelton, Jan Bayouth, Mercedes Milligan and Susanne Rector and the entire global team at Animation Magazine who have managed to grow, flourish and navigate all of the mind-bending innovations that have evolved over the most tumultuous and fast-changing 35 years in the history of the world.

Terry Thoren founded Animation Magazine and the World Animation Celebration and produced the International Tournée of Animation. He was the CEO of Klasky Csupo, the studio that incubated the first 65 episodes of The Simpsons and produced Rugrats, The Wild Thornberrys, Rocket Power and more. Ten years ago, he launched Wonder Media to use animated stories to prevent childhood trauma, help children and teens navigate out of trauma and model critical thinking and social emotional learning for children in schools.