Pixar’s 25th animated feature Turning Red dares to go where few animated films have ever gone — the terrifying world of tween girl puberty, boy bands and confusing middle school dynamics. It also explores what might happen if you just happened to turn into a giant red panda.

Led by an all-female team, the beautifully designed and animated feature is directed by Domee Shi, who won the Oscar for Best Animated Feature for her short Bao in 2019. The first-time feature director pulled from her own childhood to create the story of Mei Lee (played by Rosalie Chiang), a 13-year-old girl who struggles between following her mother’s (Sandra Oh) rules and growing into her own person.

“Growing up as an only child, I felt like I bonded a lot closer with my friend groups through each stage of my life,” Shi says. “They were kind of like my support system and my second family and with the movie we really wanted to just celebrate female friendship. This was an important part of our lives for many girls like me. A lot of these friends were my cheerleaders. They accepted me no matter what — with all of my weird, pervy drawings and obsessions with boys. They were always there for me.”

Shi says she wanted the same kind of warmth and support for the film’s main character. “It was also important for us to make sure that her friends all felt like individual girls and that they weren’t just all kind of cut from the same cloth,” she adds. “They needed to have their own identities and personalities, just to show how diverse and different teen girls can be as well.”

Producer Lindsey Collins also felt that Mei Lee’s circle of friends were an important component of the story. “I think a lot of times, unfortunately, girl friendships are portrayed like ‘mean girls’ relationships,” says Collins, whose credits include WALL•E and Finding Dory. “It was really important early on to establish that’s not how we’re representing this group of girls. I think at the end of the day, as a parent, all you’re wishing for your kids is that they have friends around them that make them feel comfortable.”

Collins adds, “What I love about Mei and her friends is that they are completely comfortable being themselves — and even when she turns into this giant red panda, her friends are the ones that are like, ‘Panda or no panda, we love you.’ It doesn’t even faze us, you know. I think that’s really important. It’s the thing that when we show (the movie) to kids, it’s one of the things they call out as being their favorite part of the movie. The fact that Mei has this really great group of friends around her that all feel very different, but are all super supportive, is really important to kids when they watch the movie.”

Shi used Mei’s transformation into a red panda as a metaphor for all the awkward emotions and feelings that come into play when puberty hits. The director describes it as an “Asian tween fever dream” as her main character stumbles into feelings about boys, sexual awareness and changes in her body. When the main character hides from her mom after turning into a red panda, Mei’s mom initially thinks that her daughter is hiding from her because she’s having her period for the first time.

The filmmakers — who also include production designer Rona Liu and VFX supervisor Danielle Feinberg — embraced a look inspired by Shi’s childhood growing up in Toronto in the early 2000s. They also studied the way tween girls stand, behave and interact with one another to come up with character movements that captured all the awkward feelings of this time in everyone’s life. Shi’s love of anime classics like Sailor Moon was also a huge influence on the look of the film.

Shi also mentions that when she first pitched the film, she wanted it to feel different from other Pixar movies. “This is going to be Pixar’s first contemporary teen girl protagonist, and I really wanted the world to reflect her character: colorful, chunky and cute, bold and in-your-face, just like Mei. We really wanted a fun, specific backdrop to tell this coming-of-age story, so we decided to set it in Toronto, Canada in the early 2000s — which was the height of teen pop mania.”

Produced entirely at Pixar during the pandemic, Shi, Collins and the entire crew were forced to pivot and create new ways for the crew to bond as they were making the film. Zoom calls full of dogs, cats and babies somehow seemed to fit with the film they were making.

“Actually, in a weird way, it helped the crew kind of bond. We all kind of had a really common experience and no place to hide,” says Collins. “So, everybody just had to get quickly okay with the messiness of it. And that was kind of thematically right in line with the movie we were making.”

Shi adds, “It made it even more important for me to try to figure out some way to connect with the crew even though we were all working remotely. It was always a big thing to do these coffee times, once or twice a week, where all of us on the crew would just hop onto a Zoom and me and Lindsey would just kind of give everybody an update or like chit chat and talk about what we did that weekend. It was just a small way to kind of connect and keep that connection with the crew.”

Shi and Collins were aware that heading an all-female crew on the film was a watershed moment for Pixar, although the studio had entered a new era of more inclusive cultural storytelling with Coco. Shi had already developed a strong artistic connection with many of the key members of the crew through working on Bao and other collaborations. This made working on Turning Red that much easier since they’d already worked out ways of communicating and developing stories together.

“It’s an honor to be part of history to be part of this amazing female-led leadership team,” says Shi. “It just happened so organically. Yet, it just felt so necessary to tell this story about an adolescent girl and these super personal, cringy and embarrassing experiences that she goes through. I felt throughout the production, it was almost comforting to know that I had a shorthand for describing all of these embarrassing experiences and that I didn’t have to sit down and explain to the leadership, ‘Okay, a girl when a girl goes through a period, she’s going through this experience in this way. Everybody on the leadership team could share stories like, ‘Oh, man — this embarrassing thing happened to me this one time.’ We were all sharing our experiences and it just always felt like we were never short on juicy material to put in the movie, which is great.”

“One of the biggest parts of the challenge for us was that the inspiration for the film was coming from a very 2D place with graphic references like anime. The first visual goal we dove into was less about the 2D versus 3D and more about the overall style of the shapes of the world, which emphasized the ‘chunky cute’ visual language. But by its nature, the chunky cute doesn’t include little fine details and some of the intricacies of other films. And with the inspirations from anime being more 2D and graphic, it felt like we were missing some of the richness and detail.

“So, the question became how to add that back in without just pulling the movie back to a more standard place. One of the first areas we found some really successful ways to do that was in the materials that our objects were made out of. One of the cool things that we added was something called ‘pooling’, or the idea that if you had painted these models, the paint would gather in spots and go darker and a little more colorful. So, with all these elements, we go from that flat color, we add the color variation and textures, and then we add the staining and pooling, followed by shading details like grout lines and shine and roughness styled in, and some shadows to show it off better.” 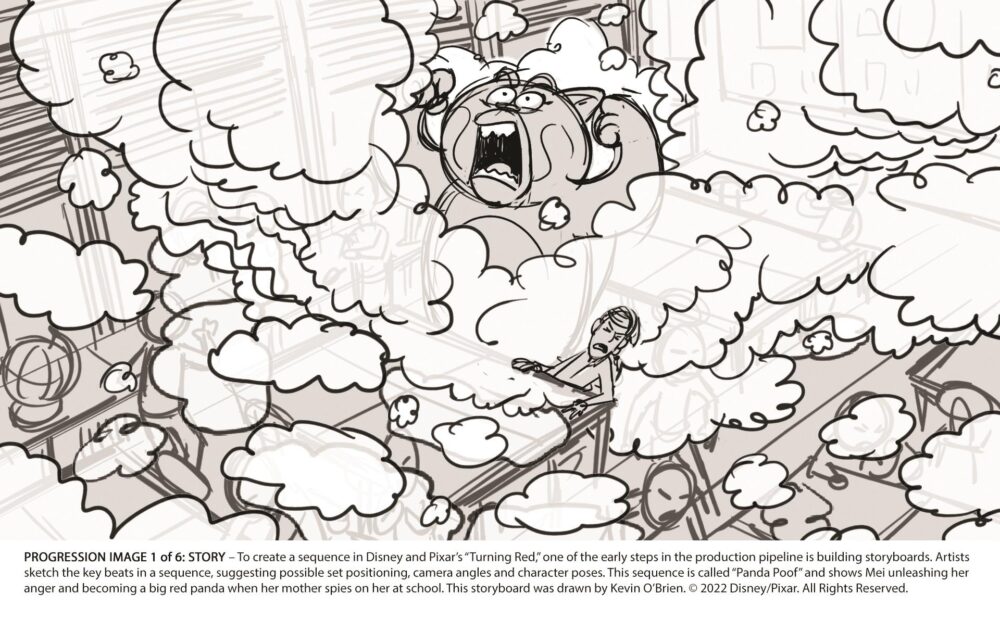 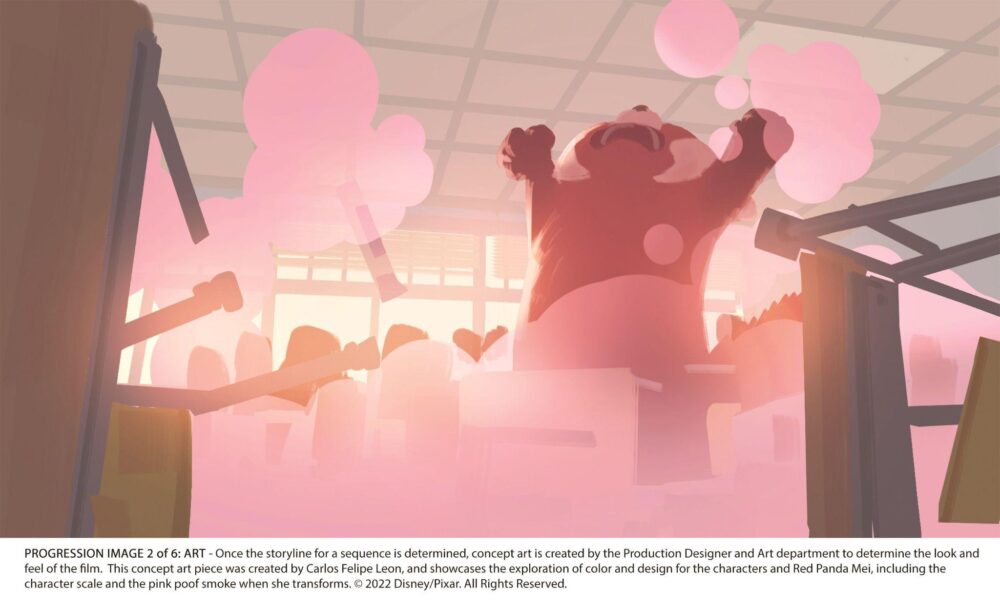 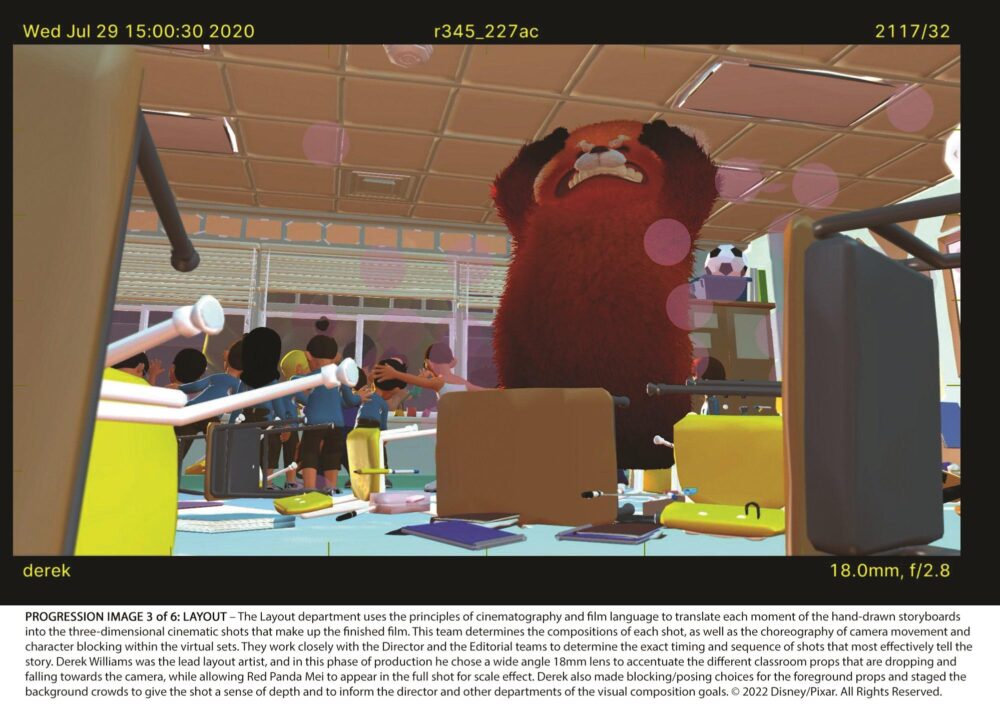 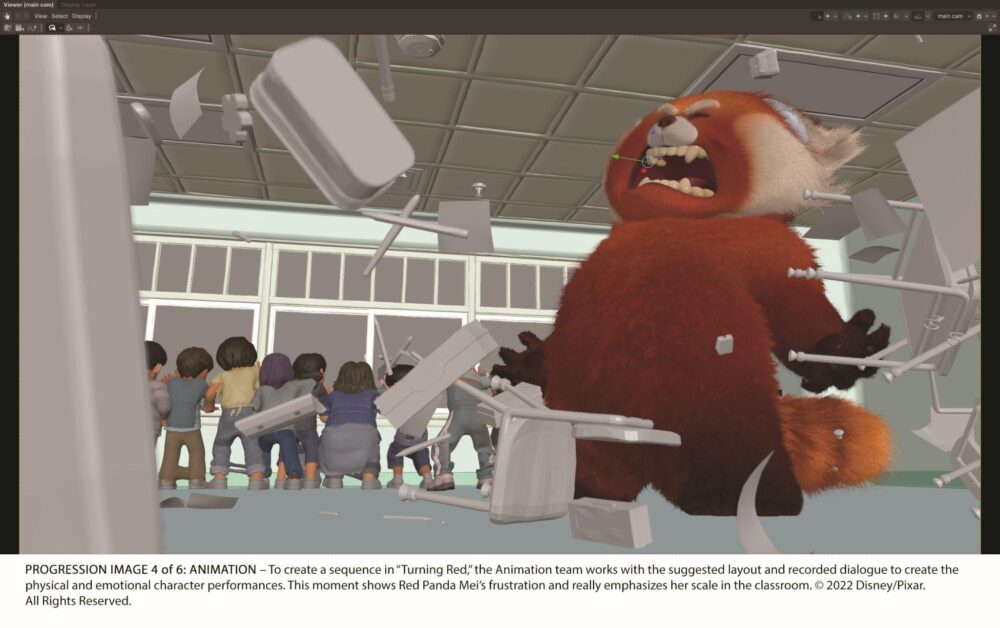 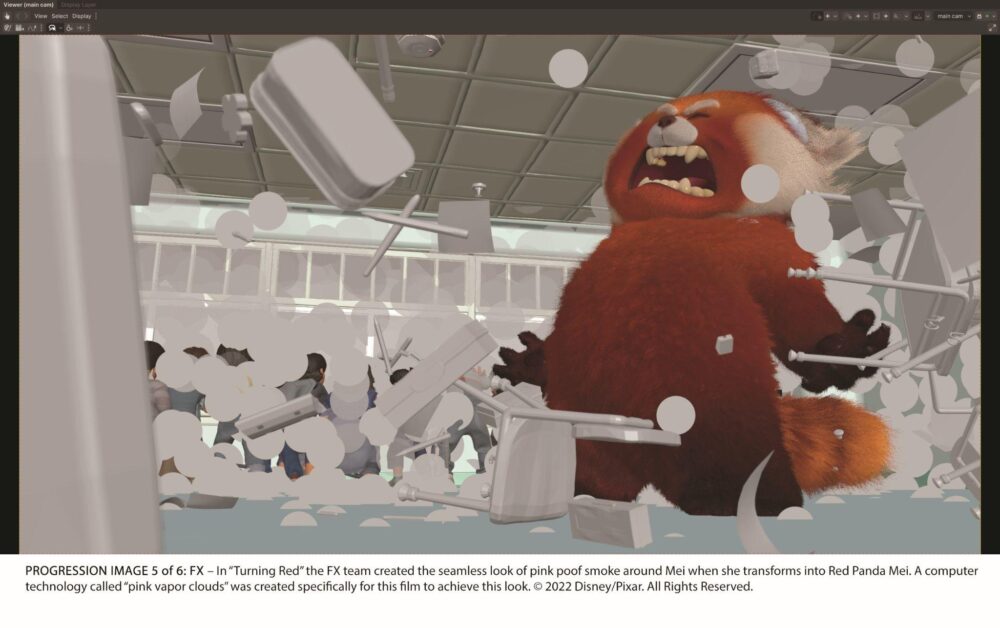 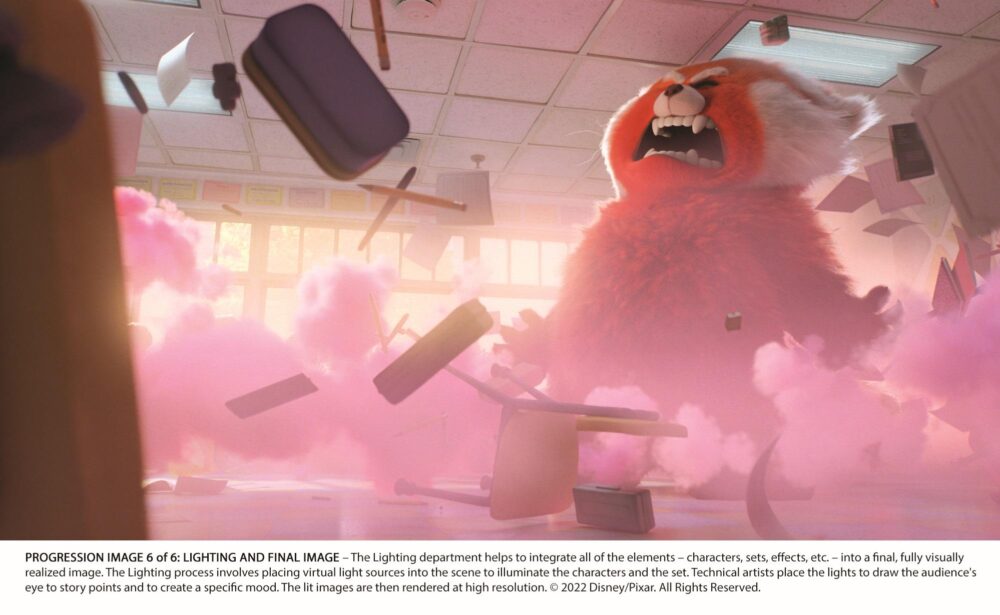