Taking action to preserve and protect our planet is more important than ever, and many impassioned storytellers have turned to animation to impart powerful messages about how human activity is impacting the natural world around us. One of the latest is the compelling CGI short Bottle Cap, a “labor of love” from directors Marie Hyon and Marco Spier at L.A.-based studio Psyop. The film premiered at Clermont-Ferrand and has just been selected for the Annecy official competition, and centers on an insecure fiddler crab who thinks a plastic bottle cap is the key to becoming a god among crustaceans — but at what cost?

We sidled up with Hyon, Spier and Psyop team members who worked on the short — senior FX artist Liam Griffin, CG lead Briana Franceschini, 3D animators Pat Porter and Ryan Moran, and executive producer Andrew Linsk — to learn more about how they got their claws around this ecological cautionary tale.

Animation Magazine: Can you tell us how this project came about?

Marie Hyon: The Bottle Cap story was inspired by our travels in Brazil very long ago, when our Brazilian friend took us to a really remote island in Bahia. We had to take a plane, a boat, walk, taxied across the island sands by a Land Rover, another smaller boat and finally a tractor — anyway, the point is: it was a very remote place, where not many humans have been. When we walked on the endless beach, we found a bottle cap lying in the sand, clearly not from this place, washed up from somewhere.We both immediately imagined how alien this “thing” must be from the perspective of the little critters living on that undisturbed beach and what would they do with something like this?

Marco Spier: We had been working on a large ad campaign selling soda in plastic bottles at the time, which made us feel some responsibility for this bottle cap. We felt the need to counteract that at Psyop, which led to the idea of making The Ocean our biggest client and doing what we do best, telling stories, developing characters and building worlds all in service to The Ocean.

How long did it take to make, and which animation tools did you use to create it?

Liam Griffin: I used a combination of the UE4 Niagara particle system and houdini, utilizing the SideFx Houdini-Niagara plugin which allows the reading of point data generated in Houdini to Unreal. This allowed me to generate the movement of some of the more complex sand simulations in Houdini, but maintain the flexibility to change sand geometry/materials in-engine and drive secondary FX like dust from them.

The water in the film was created for the most part using Unreal Engine, with some Houdini simulations integrated as alembic caches for some of the interaction with the cap — in particular, the slow motion moment where Shelton first picks it out of the water.

Briana Franceschini: We approached it (using Unreal) from a different angle. At first I was terrified, but it was exactly the scenario I needed — the challenge with an end goal. We approached it with the story and look in mind and more like a typical live-action project, which really lent itself to working in Unreal Engine.

Pat Porter: The Unreal engine meant that we could see our animation so quickly come to almost the final look. I think this enhanced the camera work and it enhanced our performance because we knew we needed to get a little bit more detailed with eye darts and stuff like that. I loved being able to see how it was going to look right away.

Can you talk about the visual style of the short?

Marie: We wanted to create an intimacy with Shelton and his beautiful natural environment, sand and our ocean. We wanted to feel his story, get to know him, be on his level, get in his head, trip out with him and get invested in him. So, we chose our lenses and crafted the shots accordingly, serving our intentions. With a comedic tone and fast-paced editing style, we wanted to bring a punk rock edge to our cute, endearing, Pixar-like character to tell the story of our toxic love affair we have with plastics.

We wanted it to have all the charm of a Pixar film but hit the audience in the face with reality, like a Trojan Horse. Besides, we are speaking about some dark themes; the dangers of plastics to the oceans, animal life and humans. Shelton believes the Bottle Cap is his savior, but what he hasn’t figured out yet, is that it can kill.

Liam: The film combines photoreal landscapes with a colorful, stylised character. Something about that combination made the ending hit hard! Shelton is such a vibrant fun character it’s easy to get caught up in his rollercoaster of personal discovery, it’s a real 1-2 punch of emotion!

Andrew Linsk: The property was originally developed with many characters and elaborate worlds, so the challenge was to boil it down to a very succinct story with only one character.

Marco: We were awarded a grant from Epic Games and they encouraged us to use the Unreal game engine. Our team at Psyop had never done this before, and that was a challenge.

Marie: You wouldn’t know by looking at this film that it was done in a game engine, because the film feels so cinematic. And on top of that, our team learned Unreal on the job, and hats off to our team for being so awesome. I’m grateful for our team of amazing artists, although they were challenged to learn Unreal on the job, they created such beauty without hesitation. We could not have achieved this film without them.

Liam: One of the biggest challenges from an FX standpoint was adjusting workflows to work in a real-time space, especially when it came to granular sand interaction.

What are you most pleased about?

Marco: I think it’s how all the different pieces work together, the messaging, the visuals, the comedy, the storytelling

Marie: I really didn’t think that crabs could be that endearing, but thanks to Ryan and Pat animating, and Briana, Liam, Mathias, Ann and Brian for realizing him and bringing him to life, that I long to visit with him again. I love Shelton! I miss him! I want to experience more of his adventures and I can’t wait to invent more for him. We also love the edginess we added to Shelton by seeing into his mind. It gave us freedom to break logic and trip out with him. I feel like our style and passion was well captured within this short film.

Liam: It was really rewarding working on a piece with that sort of message. I wanted to be part of this project because its a message i want to share with the world

Briana: I was proud that we were able to deliver such high quality while also figuring out all these things that we had never done before at the same time.

Pat: There are some really beautiful shots and I think we got so much emotion out of so little.

Ryan: Using Unreal meant that we were getting instant feedback which kept that inspiration and that fire lit the whole time because you get more and more excited as you see more stuff come out. There was a constant flow of inspiration coming from all angles of the production.

Marie: We need to stop using single use plastics and inspire designs that do away with it.

Marco: A love of the ocean. Plastic is not the only thing plaguing our oceans, which are so imperative for human life on this planet.

Marie: This is a prequel to our ambitions of a long form series that we are currently developing.

Marco: This project has been with us for many years and it faced many challenges … one skill that all filmmakers have in common is perseverance. There are no shortcuts …

Learn more about Psyop and watch the trailer for Bottle Cap at psyop.com. 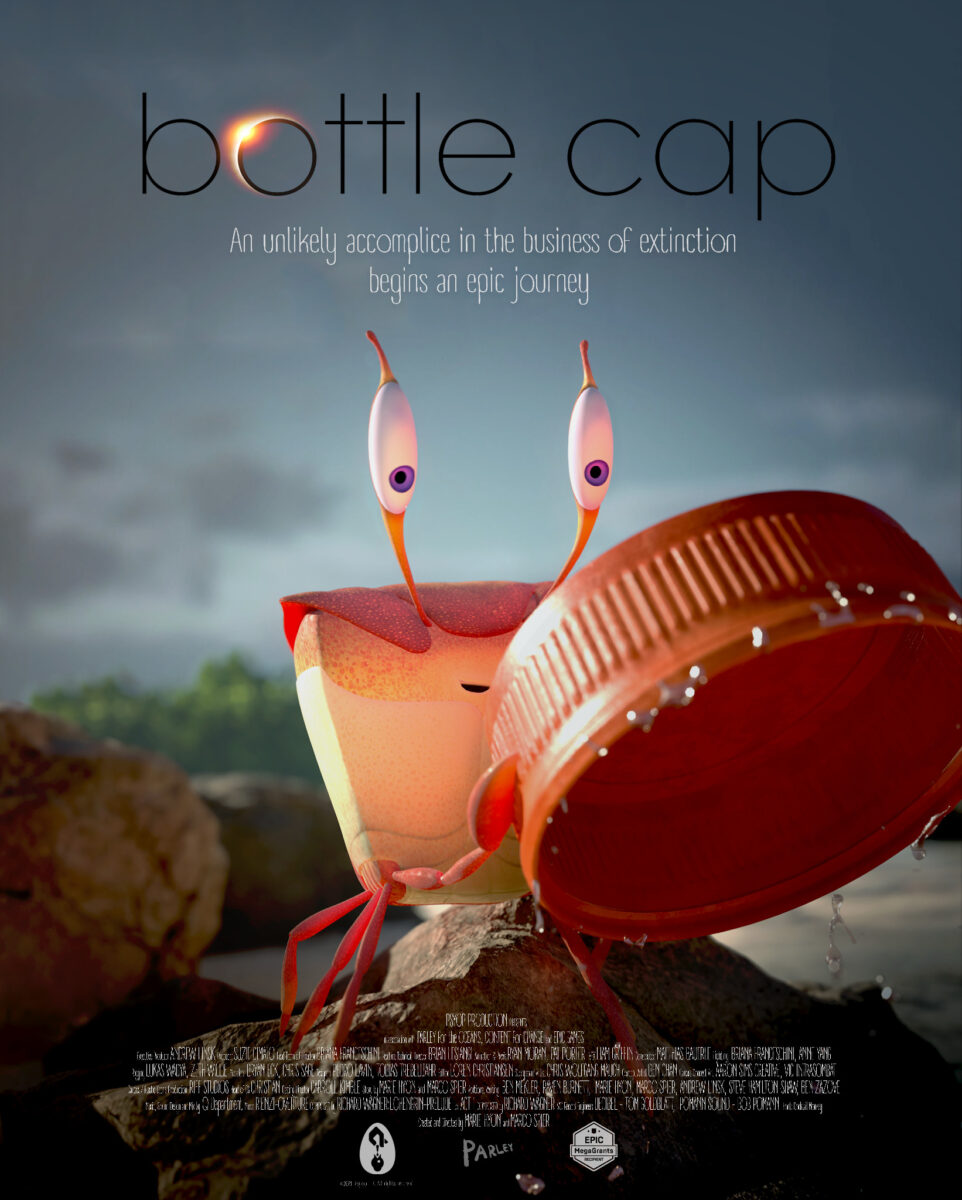