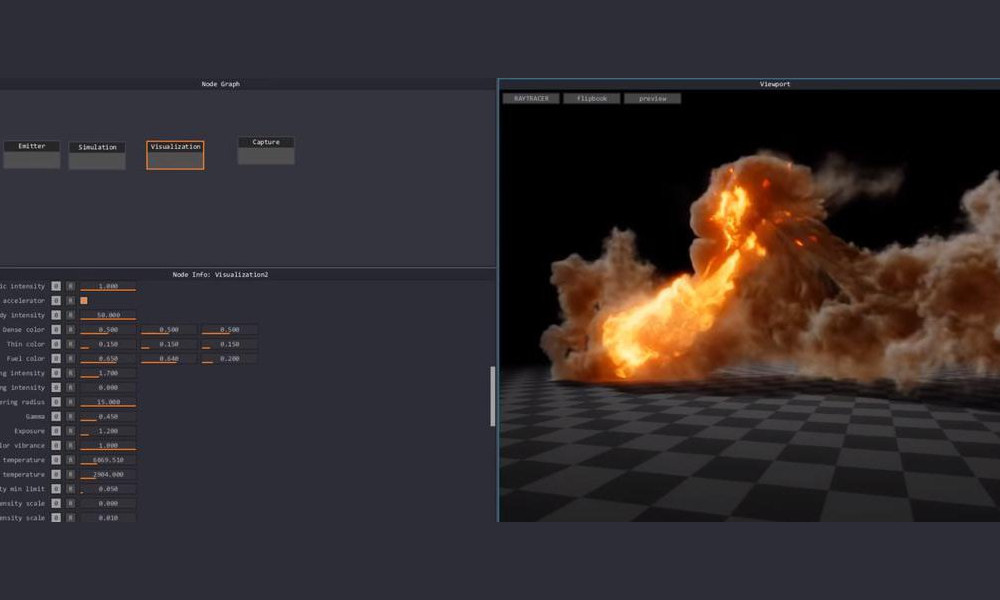 We all know that the heavy demand for VFX is not slowing down anytime soon — especially for effects like fire, explosions, dust, dirt hits, smoke and fog. These are elements that traditionally have a heavy computation hit. There is a lot of complex math going on, especially when you get more and more photorealistic, because all of that simply takes time. This is even more of a problem in real-time environments like games, and I suspect we’ll be seeing them creep into virtual production pretty soon.

Last year, JangaFX released a product into the wild called EmberGen. It was, and still is, in beta, but is actively being worked on with frequent builds and probably the most transparent development I’ve seen in any software with fully visibility to the Trello board they are using to track tasks.

EmberGen is a real-time volumetric fluid simulator that allows the user to generate fire, smoke, etc., and iterate the simulation in real time (or near real time depending on the complexity) to quickly design looks from realistic to magical. These can then be rendered out to image sequences or flipbooks for use in VFX or games, or you can export out the volumes to VDB files.

The workflow is node-based, and any VFX artist coming from Houdini, Bifrost, thinkingParticles or tyFlow will feel perfectly at home in the procedural methodology. The parameters like vorticity, temperature, turbulence, etc. will all be familiar. One feature that is not in all other FX software is the ability to easily create seamless loops — which is kind of amazing.

Earlier versions of the beta had an interface that left a lot to be desired. The math under the hood is solid, but it just needed an intuitive interface. The developers listened (to the users — not to me specifically) and brought in a UX designer to kick the software up a few notches.

The good news is that the outputs are on par with most production software. Image renders support RGBA, motion vectors, normals, masks, emissive, six-point lights, etc. You can bring in cameras from your preferred DCC and render the elements. Or, the same passes can be in a flipbook format to be used on sprites — either in a comp or in your game engine.

EmberGen comes with a plethora of presets to get you on your way: fire, volcanos, space portals, tornados, torches, dry ice — you name it. There are tons to not only act as a foundation for your own stuff, but a great way to deconstruct how the FX are made and begin to develop new recipes the more you understand how it works.

The software is GPU accelerated, so make sure you have a nice video card. I’m watching a sim on my laptop (with an RTX 5000) that is utilizing 95% of the GPU and over 8MBs of my 16MB of RAM.

The cost of a permanent license is $199 which gives you a year of updates, while further maintenance comes out to $149 per year to continue updates. So it’s sort of a subscription, but your software doesn’t go away if you don’t continue, it just doesn’t get updated. It’s not a bad price at all, and I’m all about supporting little guys. So, if you have lots of effects to create, this feels like a perfect tool for the toolbox.

Since my last review of KeenTools back in 2018, the development team hasn’t stopped making those tools better, and they’ve continued to add useful features using the technology they’ve already developed. The foundational tools allow one to track geometry, build face geometry from scratch, track face geometry to footage, texture geometry and lock geo to a scene through GeoTracker, FaceBuilder, FaceTracker, TextureBuilder and the PinTool, respectively. All of this without leaving the comfort of your Nuke interface.

In the latest build, 2021.3.2, the big addition is a suite of three nodes for controlling blend shapes. By taking different meshes with the same topology, one can make morph targets between the shapes. In the case of a face, it could be the difference between a neutral face and a smile. This may be pretty “3D 101” stuff, but this is all in Nuke rather than a dedicated 3D program.

JoinBlendshapes does exactly that — it joins geometry to be used in the model deformation (neutral, smile, right eyebrow up, left eyebrow up, blink, etc.) The node collects the same topology models with their unique deformations, gives you a field to name them, and then passes the information downstream to the second node in the suite, MixBlendshapes. This node provides sliders for each of the inputs for you to animate and/or create new expressions.

You might say, “Well, this is all well and good, but I can do that in Maya.” And yes you can, but now you can take your blendshapes and feed them into the KeenTools GeoTracker and track your head to the person in the footage. Also, when the director wants to modify an expression or add a blink, then it can be done in Nuke without sending it all the way back up the chain to Maya and the animation department.

For human faces specifically (which FaceBuilder and FaceTracker is ideal for), you don’t need to set up your own blendshapes.  The FACS (Facial Action Coding System) node provides all of the targets already. Hook up a MixBlendshapes node to the FACS node and you have all the controls for the face target shapes. You can even feed in data from the FaceTracker node to drive the FACS shapes.  And if that weren’t enough, you can remap the animation to another face, even if the topology is different.

It doesn’t stop there: The KeenTools are available for Nuke Indie as well. And: the KeenTools team has also ported FaceBuilder for Blender since I last looked at it. This is some serious stuff, people! Incredibly powerful, and as I said in the last review, also incredibly smart.

Here is yet another powerful piece of software that I haven’t reviewed for a few years: thinkingParticles. And perhaps this is because Cebas does periodic drops of builds rather than an annual release with all sorts of new stuff that you’ve been needing since the last big release.  This is the same with Adobe or Autodesk, where they push out a new build and say, “Take a look!” Great for the users, but not so good for reviewers like me who just want to showcase the big advances.

But the release of thinkingParticles 7 warrants a nod as Cebas moves from 6.x into the next realm of procedural visual effects — not all of it on the surface. The developers at Cebas have been spending time cleaning out the older, slower code, swapping out the memory management architecture to make sure the software is taking full advantage of the ubiquitous multi-core workstations we have today. It’s this necessary housekeeping that keeps things from not taking advantage of the latest hardware tech.

The largest step forward is the inclusion of the Flow MPM node, which allows for Material Point Method simulations. This is a calculation technique to simulate solids, liquids, gases and continuum material. And for TP7, this solver calculates granular elements like snow and sand, stuff with cohesion that can break apart. Full control of the materials is provided, and even further control happens when you utilize the Flow Data node, reading and manipulating the properties of the material. The Flow MPM solve will also work in conjunction with other solvers in TP using Flow Solver — like their SPH (smoothed-particle hydrodynamics) solver.

The viewport display is now more robust with the help of the latest GPU acceleration. Millions of particles in the viewport give a much more accurate representation of the volume and density compared to the final render. Oh, and by the way, Cebas’ finalRender is bundled with TP, so you can further take advantage of the hybrid render that can do insanely faster point renders through NanoVDB — a subset of OpenVDB that TP 7 has taken advantage of. Also note that support for OpenVDB got a performance boost and is multithreaded.

In addition, a Voronoi/Cellular helper has been included to provide control to the shape and structure of fractures. And anyone who is tired of looking at traditional Voronoi fractures knows just how important it is to be able to mix that up so the pattern doesn’t reveal itself.

Fragmenter has received an overhaul, giving birth to ShapeElement, which will break apart meshes into its elements for proper destruction. Fragmenter is still available, but ShapeElements is more streamlined. Of course, any time you can optimize your workflow, it is a good thing — all those extra calculations can add up quickly.

Overall, this is a powerful and promising release for a package that has been delivering high-end VFX for high-end studios for over a decade. If you need more proof, just watch the opening bridge collapse sequence in Final Destination 5 (#notsohumblebrag).