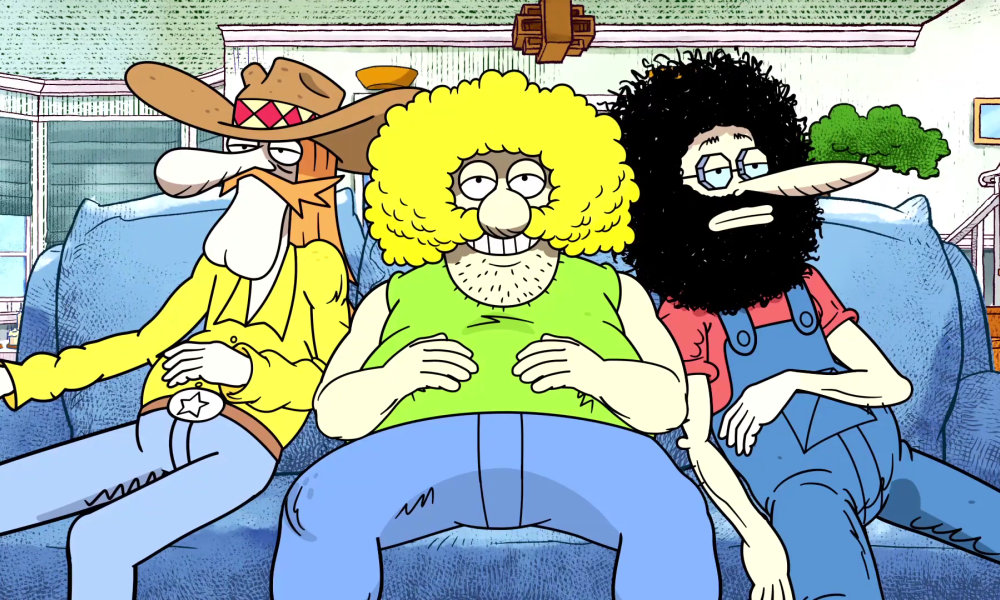 Tubi unveiled the trailer for its first-ever original animated series The Freak Brothers, based on the cult classic underground comics by Gilbert Shelton and set to premiere Sunday, November 14 with two episodes. (TV viewers can catch a sneak peak with a special 90-second trailer during FOX’s Animation Domination block in Family Guy, 9:30-100 p.m.) New episodes will drop every Sunday through Dec. 26.

The series follows laid-back Freewheelin’ Franklin Freek (Woody Harrelson), man-child Fat Freddy Freekowtski (John Goodman), paranoid Phineas T. Phreakers (Pete Davidson) and their sardonic cat, Kitty (Tiffany Haddish). The all-star cast also features Adam Devine and Blake Anderson as Chuck and Charlie, a couple of weed savants always looking for the next side hustle, with hearts of gold hidden beneath their unwashed exteriors; Andrea Savage as Harper, a no-nonsense techie who undoubtedly wears the pants in her household; La La Anthony as Gretchen, a social-advocate lawyer who is the more idealistic and compassionate younger sister of Harper; and ScHoolboy Q voices an animated version of himself who finds himself surrounded by “The Freaks.”

The series is produced by WTG Enterprises and distributed by Lionsgate; animation by Starburns Industries and Pure Imagination Studios.

Having just premiered on September 16, Brad Neely (China, IL; Brad Neely’s Harg Nallin’ Sclopio Peepio) broke the news Thursday that The Harper House will not be unpacking any further seasons on Paramount+. The series creator posted to Twitter: “I’ll always appreciate the show’s resilient crew and cast that came together during an unprecedented breakdown of normal life to make this family with me. I’m grateful to everyone involved and to anyone who gave it a shot. It’s time to get nuts.”

Produced by CBS Eye Animation in association with 219 Productions, with animation by Titmouse, The Harper House centers on Debbie Harper (Rhea Seehorn), the overconfident female head of a household, who struggles to regain a higher status for herself and for her family of oddballs, after losing her job and moving from the rich side to the poor side of a small town in Arkansas. To save money, they’ve moved into their inherited Victorian fixer-upper — a historic residence known as the Harper House.

The campers face an insidious new threat in the Season 4 trailer for Jurassic World: Camp Cretaceous from DreamWorks Animation. Kirby Howell-Baptiste (Cruella, The Good Place) and Haley Joel Osment (The Kominsky Method) join the cast for this batch of 11 episodes, premiering on Netflix on December 3. Finally escaping Isla Nublar, the campers find themselves in grave danger when shipwrecked on a mysterious island. As the group begins to uncover the strange secrets of this new land, they must hatch a plan to not only save themselves, but also protect the dinosaurs from the sinister forces at work.

The series follows six teenagers chosen for a once-in-a-lifetime experience at Camp Cretaceous, a new adventure camp on the opposite side of Isla Nublar, who must work together to survive when dinosaurs wreak havoc across the island. From DreamWorks Animation, Universal Pictures and Amblin Entertainment, Camp Cretaceous is executive produced by Steven Spielberg, Colin Trevorrow, and Frank Marshall, alongside executive producers and showrunners Scott Kreamer and Aaron Hammersley.

Tag Barker (Michela Luci) and Scooch Pooch (Callum Shoniker) are off to the races for more adventures in Pawston! See them compete in their first race as Race Cadets, rally the community to organize an unforgettable 100th birthday celebration for the city of Pawston, and endeavor to fix Sandra Paws’ sleigh and save “Sniffs-mas!” But no matter how far and fast they travel, Tag and Scooch are often reminded that it’s friends and family that truly make their community go.

NFB.ca is adding a compelling slate of new titles to its free-to-watch selection this month, hailing from NFB studios across Canada. These include the world premiere of the interactive animated film Brainstream, by Caroline Robert of Studio AATOAA; Renée Blanchar’s profoundly human feature documentary The Silence; the short docs Being Prepared by Carol Kunnuk and Into Light by Sheona McDonald, the latter being released to highlight Transgender Awareness Week; a thematic channel for Remembrance Day; and films celebrating the winners of the Governor General’s Performing Arts Awards. The new works join more than 5,500 titles and roughly 100 interactive works already available.

Debuting November 19, Brainstream (Sérotonine Anonyme) is a 20-minute interactive animated film in which a young girl livestreams her thoughts during a new kind of treatment session. The piece explores the fascinating workings of our brain with sensitivity and humor. It will have its world premiere at the prestigious International Documentary Film Festival Amsterdam (IDFA) in the form of an installation, in competition as part of the DocLab section, and it will be launching online simultaneously around the world, accessible at nfb.ca/brainstream, on computers as well as mobile devices.

In other Tubi news, FOX’s free streamer recently announced a deal with NIS America to bring a collection of globally popular anime series to fans. The lineup is: