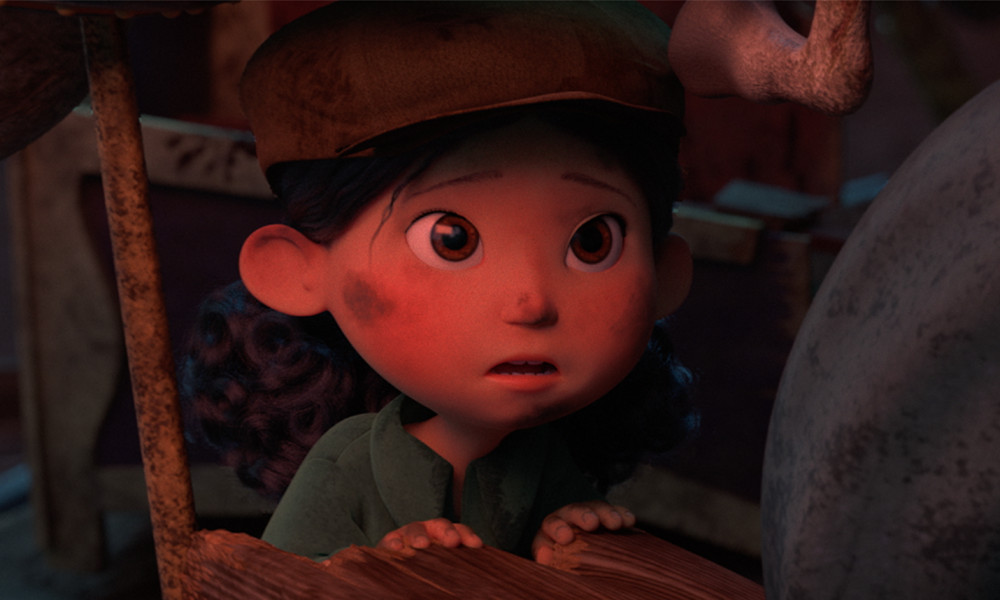 Ten years in the making and completed with the help of 350 volunteers across 35 countries, Mila, a powerful CG short about a young girl’s witness to the WWII bombings, is now in consideration for Best Animated Short Film for the 94th Academy Awards and streaming on the Academy Screening Room. This category is accessible to Academy members for voting purposes.

Mila is a war story told from a child’s perspective. While the film is inspired by true events that occurred in Trento, Italy in 1943, Mila stands in for the children caught up in any war, of any time. The character represents the best of humanity: Although she has lost everything — her family, her house and her peace — she still clings to hope.

While audiences do not often see animation explore serious, complex matters such as war, director and writer Cinzia Angelini believes it is the perfect medium to tell this story because while it is civilians who are the first to be hit, it is their children that are the last to be remembered.

“I am deeply honored and immensely grateful to be at the helm of such an incredible group of volunteers, who believed in me, in Mila and all that she represents. To see a project with such humble beginnings actually make it to being considered for the Academy Awards shows us what artists can do when they unite towards a meaningful goal. Nothing can stop them!” commented Angelini.

“This has always been a team effort, supported by countless people who encouraged, contributed and became a part of our international, multicultural crew. Sharing this wonderful news with all of them has been the ultimate reward, and I thank each of them from the bottom of my heart.”

The CG short has not only rallied a global collective to illustrate the hearts, minds and everlasting hope of children in warzones, but has also spotlighted women in the animation industry. Thirty percent of the film’s crew was female, and many held leadership roles including writer/director, producer, executive producers, script supervisor, head of lighting, rigging supervisor, character effects leads and co-production managers.

“I am so happy that I work in a studio that really cares about supporting women in the industry,” said Angelini. “And I’m also happy that I was able to give back… with advice or with recommendations or with networking to help people that were on the film for many years get something out of it. Many people that started as students with us are now professionals and were able to have portfolios thanks to Mila. We didn’t want to just take from the community, so we gave back as much as we could.”

Originally from Italy, Angelini moved to Los Angeles in 1997 and has worked as a 2D/3D animator and story artist for studios like DreamWorks, Disney, Warner Bros., Sony Imageworks, Illumination and, most recently, Cinesite. Her credits include Balto, The Prince of Egypt, The Road to El Dorado, Spirit: Stallion of the Cimarron, Sinbad: Legend of the Seven Seas, Spider-Man 2 (Best Visual Effects Oscar winner, 2005), Open Season, Meet the Robinsons, Bolt, Minions, Despicable Me 3, The Grinch and Abominable. She presented her talk “Bridging cultural diversity through the magic of animation” to a world-wide audience for TEDx, in the U.S. and again in Italy.

Angelini is currently co-directing the animated feature Hitpig (2022) with David Feiss, set in a futuristic cyberpunk world the story follows a grizzled porcine bounty hunter (Peter Dinklage) who accepts his next hit: Pickles (Lilly Singh), a naive, ebullient elephant who has escaped the clutches of an evil trillionaire. The film is produced by Aniventure and is currently in production at Cinesite.

Mila has received more than 40 awards and screened as an official selection in over 110 festivals around the world. Learn more at milafilm.com.