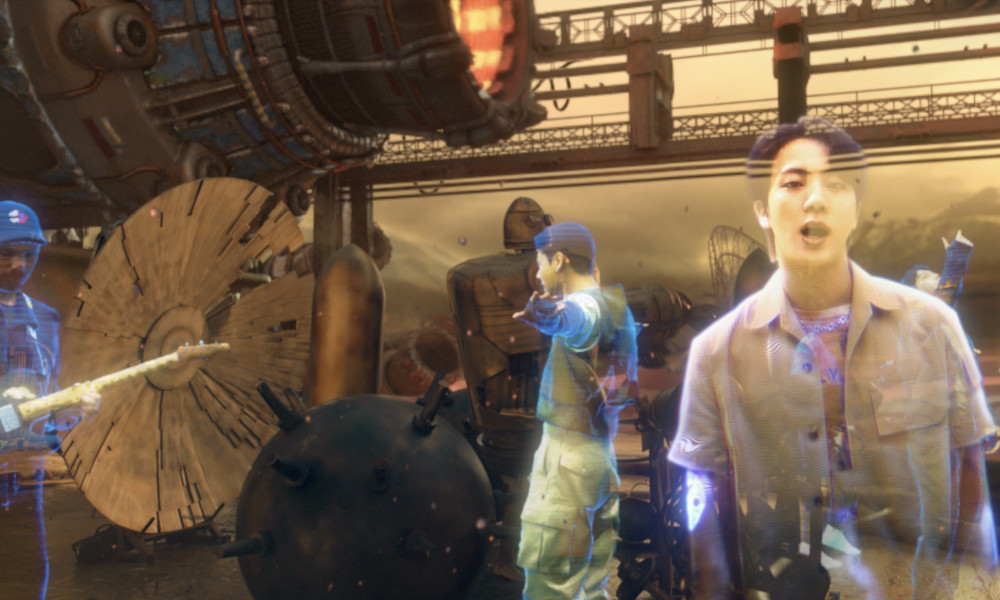 Ingenuity Studios coordinated the visual effects work from five VFX studios — including its own, along with AMGI Studios, Buf, Rodeo VFX and Territory Studio — from inception to delivery of the wildly creative “My Universe” music video for Coldplay + BTS.

Directed by Dave Meyers and produced by Nathan Sherrer of Freenjoy, “My Universe” is a piece about unity in a time of isolation. The groups are on separate planets and seek out an illegal way to communicate and jam together with the help of a renowned renegade in the stars (DJ L’Afrique) who transmits a joint frequency between the worlds.

Work on this project spanned approximately two months, with a level of complexity that even music video veterans Ingenuity Studios noted was exceptional.

“We were the right partner for this project thanks in part to our close working relationship with music video producer Nathan Scherrer from Freenjoy and director Dave Meyers. We’ve worked together many times, including most recently for Ed Sheeran’s ‘Bad Habits’ video. For ‘My Universe,’ we were able to do a massive amount of work in a relatively short time frame, working alongside multiple vendors, as well as contributing our own VFX work,” said David Lebensfeld, VFX Supervisor & Founding Partner of Ingenuity Studios.

“I must also add that my team’s senior producer, Jumanah Shaheen, deserves a lot of credit here for post-producing the entirety of the project and managing not only internal VFX but also coordinating with the four other studios,” added Lebensfeld.

“Among the talented artists and studios on this project, AMGI Animation was pleased to work on all the VFX holograms and CG characters for the band Supernova 7,” said Colin Brady, CCO of AMGI Studio. “It was truly an honor to work on a project of this magnitude with so many talented individuals leading the charge!”

Mark Millar, Head of Production at AMGI Studio, added, “The most challenging aspect of our team’s work was dealing with the volumetric data. Lots of heavy data with constantly changing textures made for an interesting challenge.”

“We crafted the full CG intro and outro sequences as well as the spaceship’s interior shots. We shared our scope of work between our Paris and Montreal’s teams,” noted Camille Gibrat, VFX Producer at BUF.

“Our VFX team was involved from shooting to delivery,” said Julie-Anne Cassidy, VFX Executive Producer at RodeoFX. “In addition to creating the special effects, Erik Gagnon, VFX supervisor at RodeoFX, worked closely with director Dave Meyers on set in Barcelona. The dazzling music video features three different universes and RodeoFX created the entire environment of the planet ‘Floris’, the one on which Coldplay performs. In order to create this universe, our team of over 30 artists, including matte painting and compositing experts, joined forces to realize this great project.”

Territory Studio Creative Director Marti Romances shared, “Territory Studio was tasked with designing compelling UI and communication systems for ‘My Universe,’ building uniquely refined UI, holograms and graphical elements featured throughout the sci-fi themed promo. A multitask brief required design and animation of menus and HUD systems for the spaceship interior, the drone POVs of different galactic planets, VFX transitions teleporting band members from one planet to another, as well as titling and text elements. We worked to plan, design, and deliver motion graphics to help drive the music video’s future-facing narrative and celebrate the love of music in a galaxy far, far away…”

Romances added, “Since music videos are way shorter than film and TV shows, the time to tell a story becomes reduced. All graphics need to inform the audience of the story immediately — within a second or two — so attention to detail with animations became paramount to success. Lots of careful planning was required … For example, we needed to build 20 animated assets for the spaceship cockpit alone.”

When two iconic bands unite, each with massive fan bases around the world, it isn’t surprising that engagement skyrocketed for this video on YouTube, where it is poised to break the 100 million views mark.

“It is always gratifying for the artists of our team to work on big projects like this one; especially on a music video with such creativity and unique visuals. Of course, having the opportunity to work on a hit song that so many people can’t wait to listen to is a real honor,” noted Philippe Lépine, VFX Producer at BUF.

Erik Gagnon, VFX and on-set supervisor at Rodeo VFX, added, “Actually being on set with the production team is certainly a highlight of any project with Dave Meyers. Idea after idea, his creativity is always evolving and his concepts continue to come to life. Following two different Barcelona sets — one abandoned pool and one deserted cement plant plus two days of shooting, and one million challenges later, the mission was complete. It was a thrill to be able to contribute to the technical and artistic aspects of this project.”

Territory’s Romances echoed the sentiment: “Working with Dave Meyers, and also helping Chris Martin with his creative vision were real highlights of this project. We love science fiction and helping clients create fictional worlds but there’s something truly special about working for such an iconic band. We are all big fans of Coldplay here at Territory!”

“Aside from being a super catchy song, it’s an honor to be a part of something that is legitimately doing good by bringing many cultures closer together,” said AMGI’s Brady.

Ingenuity’s Lebensfeld added, “The best part about working on this project was the epic level of creativity! Dave Meyers thinks very big which allows us to execute unique concepts and push the boundaries of what we have done before.”