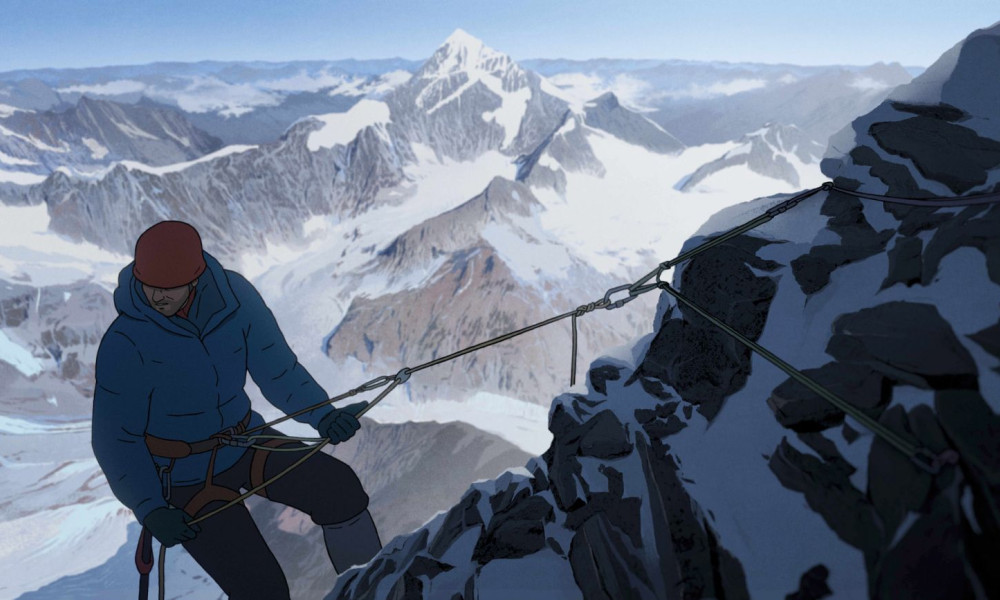 Peak Performance: Patrick Imbert Scales New Heights with ‘The Summit of the Gods’

Treacherous and historic alpinism has fascinated both documentary filmmakers and fiction directors for decades. But perhaps, one of the most effective and nail-biting depictions of the sport of mountaineering is the new French-Luxembourg animated feature The Summit of the Gods. The exquisitely designed and crafted project, which is directed and co-written by Patrick Imbert (The Big Bad Fox and Other Tales) debuted at the Cannes Festival in June and will premiere on Netflix this month.

Based on the acclaimed manga by Jirô Taniguchi, the film centers on the story of Habu Jôji, an outcast mountaineer with a tragic past, and Fukamachi Makoto, a journalist bent on discovering the truth about George Mallory’s historic 1924 Everest climb. (The manga was also the basis of a popular 2016 live-action movie directed by Hideyuki Hirayama.) In addition to Imbert, the feature has a truly impressive pedigree: It was co-written and produced by Jean-Charles Ostoréro, produced by Didier Brunner (The Triplets of Belleville), Damien Brunner (Wolfwalkers) and Stéphan Roelants (The Breadwinner).

The project first came to Imbert’s attention as a proposal from the film’s producers.

“At the time, I was working on The Big Bad Fox and Other Tales at Folivari studio and I was asked to do some preparatory drawings for the financing,” he tells us via email. “They liked it, and as chance would have it, I was given gradually more and more responsibilities.”

The director says he used the animation medium to express the story in the best way possible. “I don’t know if animation lends itself to these kinds of images, but it is my means of expression, and I use it as such,” says Imbert. “For example, images in live features and documentaries are extremely precise, like breathtaking views from helicopters or drones that cannot be achieved in 2D animation. So, I did not want to put myself on the same level — but the goal was to play with the color, the light, the ‘false depth’ of field and, in general, we tried to be more suggestive than descriptive for the natural world.”

“Taniguchi’s manga gives a lot of information, but nevertheless, it’s not a storyboard,” he points out. “We did a lot of research on Everest, and to be as accurate as possible, we asked mountaineers. It was necessary to make the questioning of Habu and Fukamachi during the climb understandable. At the end of the day, it’s close to the artistic process. All other things being said, when I am asked why I draw, I can only answer, ‘Because that’s what I love.’ And like for our two heroes, there is also a big feeling of loneliness when creating.”

The helmer had to divert from Taniguchi’s original designs because of the illustrations’ excruciating amount of detail. “It was impossible to reproduce in animation, given the number of drawings to be made, but by drawing a lighter line, the animators were able to focus on the faces, their expressions,” he explains.  “Keeping a realistic line and choosing 2D required great precision; for example, on the positioning of the eyes. An eye that is slightly too low creates a feeling of discomfort for the viewer.”

He elaborates, “Taniguchi was very good at composition, but I used other frames. Without real depth like in 3D, we used everything at our disposal in 2D to recreate the feeling of immersion, like backlighting or rich compositions. We tried lots of ideas, and if it didn’t work, we would start over.”

Imbert says the studio relied on modern, yet simple animation tools to create the clean, 2D visuals. “We used Toon Boom Storyboard and Animate to storyboard, then Toon Boom Harmony for animation, Photoshop for the sets and, finally, After Effects for compositing,” he notes. “The production was divided between several studios in France and Luxembourg, but the main studio was in Paris (Folivari).”

The artistic team was also heavily influenced by documentaries such as The Dawn Wall, as well as Japanese auteurs like Satoshi Kon, Hayao Miyazaki, Katsushika Hokusai, Isao Takahata and Yasujirō Ozu.

Imbert also gives a lot of credit to the film’s music by Amine Bouhafa (The Man Who Sold His Skin) for helping him reach his goal. “I have to point out that the soundtrack and the music helped us greatly. Because of the distance provided by the animation, we can push those elements a little further than in live action, without it seeming exaggerated.”

For Imbert, one of the intriguing aspects of the job was how different it was from his previous movie, the Annie-nominated The Big Bad Fox and Other Tales, a charming collection of tales set in the animal kingdom based on the comics by Benjamin Renner, which received the César Award for Best Animated Feature in 2018.  “I find that making animated films is always a big challenge,” he notes. “But the most interesting aspect was to make a film that was more adult-oriented than the ones we usually do and to be able to bring my own personal style and perspective to it.”

“Working on The Big Bad Fox taught me to collaborate with the great author and co-director Benjamin Renner,” he offers. “He is a great director and he always asks himself the right questions. It’s his way of thinking that influenced me. I was inspired by how he managed to solve problems and he also connects with the public. In the end, the two films are very different, but the steps you take to achieve the final results are similar.”

When asked about his favorite auteurs and cinematic heroes,  Imbert offers a wide range of names. “I have many favorites: It ranges from Truffaut and Kubrick to Claude Sautet, Jacques Audiard and Scorsese,” he reveals. “But it’s just the great masters. For example, I was very impressed by Jonah Hill’s 2018 movie Mid90s. In animation, [my idols] are Satoshi Kon, Hiroyuki Okiura and, above all, Isao Takahata.”

When it comes to the general state of animation today, the director claims he doesn’t know enough about the business side, but from an artistic point of view, he believes we are going through a renaissance of sorts. He says, “I have the impression that we are in a very positive period insofar as many different talents can express themselves in their own way, whether it’s a big 3D movie with a big budget or a super arty, independent short,” he notes.

The Summit of the Gods, which was released theatrically in France in late September, will get a brief theatrical run this month in the U.S. as well. Imbert says he’s proud of the fact the film appeals to a wide audience. “I am pleased that the film can speak to anyone — even if you don’t read comics, even if you don’t know anything about mountaineering or animation,” he notes. “Following one screening, someone said, ‘After a while I forgot it was a cartoon!’ In fact, it’s a movie above all else. But also, when I see audiences cry at the end of a screening, I tell myself that the emotions work.”

Netflix will release The Summit of the Gods theatrically in the U.S. on November 24 and the U.K. on Nov. 26; streaming on Nov. 30.