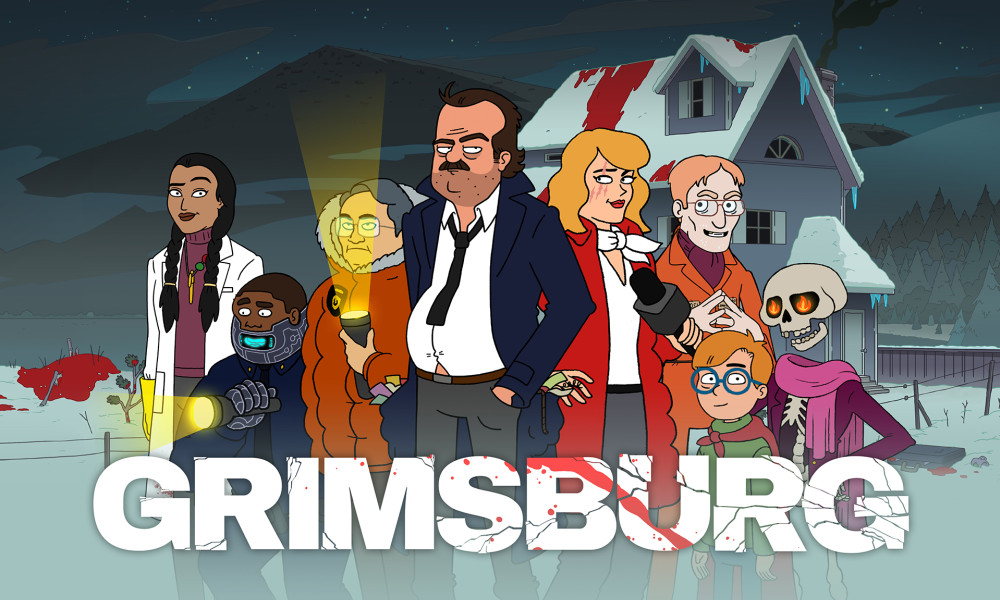 Fully owned by FOX Entertainment and created by Catlan McClelland and Matthew Schlissel, Grimsburg will premiere in 2023 and be produced by FOX’s Emmy-winning animation studio, Bento Box Entertainment (Bob’s Burgers, The Great North).

“I am very excited to be involved in the FOX animation universe. A universe I have been actively watching since the early nineties,” said Hamm. “The opportunity to get to bring a project like Grimsburg to life, that is so particular and unique, and to work with its incredibly imaginative and hilarious creators is one I can’t wait to get started with.”

“As we continue to expand our animation brand beyond family comedies, Grimsburg‘s wildly funny, bizarre and inventive take on the crime genre makes it the perfect next generation FOX comedy,” added Thorn. “And with Jon Hamm front and center as Marvin Flute, the deeply troubled detective with very eclectic taste and opinions, we believe this may finally be Hamm’s breakout role as a leading man.”

Hamm will voice Marvin Flute — perhaps the greatest detective ever to catch a cannibal clown or correctly identify a mid-century modern armoire. But there’s one mystery he still can’t crack: his family. Now that he’s back in Grimsburg, a town where everyone has a secret or three, Flute will follow every lead he’s got to redeem himself with the ex-wife he never stopped loving, even if it means hanging out with the son he never bothered to get to know.

“The mystery is solved: Grimsburg is a thoroughly original and comedic take on the small-town crime show trope with a mix of the insatiable Jon Hamm and head-spinning plot twists and turns,” added Gail Berman, Executive Producer and Chairman and CEO of The Jackal Group. “FOX, Bento Box and Grimsburg‘s genius creators, Catlan and Matthew, are taking the animation genre to new heights under the wise leadership of our brilliant showrunner Chadd Gindin in this eccentric comedy with a broad appeal. We are thrilled to be a part of this great team.”

Known for his nuance portrayal of Don Draper in Mad Men (AMC), Hamm has earned numerous accolades, including an Emmy Award in 2015 for Outstanding Actor in a Drama Series, Golden Globe Awards in 2016 and 2008, Television Critics Association Awards in 2011 and 2015, a Critics’ Choice Television Award in 2011, as well as multiple Screen Actors Guild nominations.

Hamm’s animation voiceover credits include Tony Stark in Marvel’s M.O.D.O.K., Mayor Webb in Bless the Harts and Captain Murphy in Archer; recurring and guest roles for TV’s TripTank, Big Mouth, SpongeBob SquarePants, Wander Over Yonder, Family Guy and Robot Chicken; and animated features Minions, Shrek Forever After and Ari Folman’s hybrid adaptation The Congress. On the live-action side, Hamm is currently in production on John Slattery’s Maggie Moore(s), in which he will star opposite Tina Fey. Earlier this year he completed production on Fletch. Next year, he will be seen in Top Gun: Maverick. Award-winning and notable appearances include 30 Rock, Unbreakable Kimmy Schmidt, Good Omens and Baby Driver.

McClelland studied film and animation at Rhode Island School of Design, and then did some contractor work for the U.S. Department of Defense in Baghdad. He received his MFA in Screenwriting from LMU, where he has taught Screenwriting since 2015.

Schlissel escaped Boca Raton, Florida, to study screenwriting in L.A. He has a BFA in Film Studies, an MFA in Screenwriting from LMU and a deep fondness for improv and sketch comedy. Schlissel also teaches screenwriting at LMU.