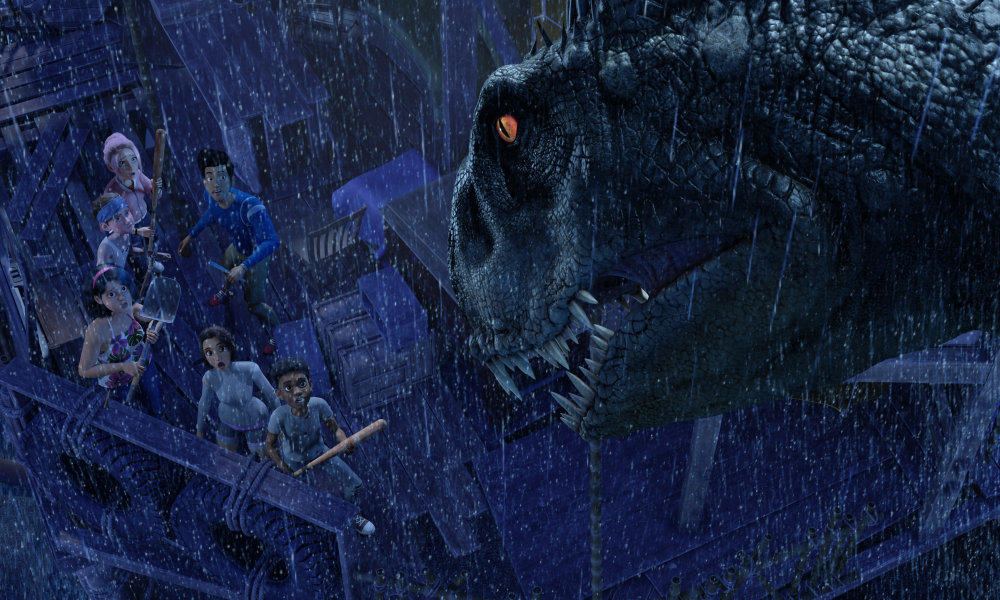 DreamWorks Animation announced that a fourth season of the hit series Jurassic World: Camp Cretaceous will return to Netflix on December 3. The news was shared to social media feeds on Friday with a motion poster teasing a journey to a new island for our young heroes…

Inspired by the blockbuster Jurassic World franchise, the animated series follows six teenagers chosen for a once-in-a-lifetime experience at Camp Cretaceous, a new adventure camp on the opposite side of Isla Nublar, who must work together to survive when dinosaurs wreak havoc across the island. From DreamWorks Animation, Universal Pictures and Amblin Entertainment, the series is executive produced by Steven Spielberg, Colin Trevorrow and Frank Marshall, alongside executive producers and showrunners Scott Kreamer and Aaron Hammersley.

Nickelodeon India continues to lead the nation’s homegrown animation revolution, announcing its 11th original kids’ IP Chikoo aur Bunty, premiering October 18 and set to air Monday-Friday at 10 a.m. Powered by Phillips, in association with Pediasure and Flipkart shopsy, the series is a tongue-in-cheek comedy that reflects the familiar jabs of sibling rivalry. Set in a middle-class home where Chikoo and Bunty live with their parents and a playful and intelligent dog, Barfi, the 11-minute episodic series spotlights the fun, sometimes sweet and sometimes sour banter and rivalry between the two brothers competing for affection and goodies, while avoiding being reprimanded by their parents for their mischief. Chikoo aur Bunty is complemented by a robust multi-screen and multi-touchpoint marketing plan, and boasts a toe-tapping music video written by Gulzaar Saab.

“Nickelodeon has always stayed ahead of the curve by introducing kids to characters that are loved and adored. We have consistently catered to our young viewers’ evolving preferences with innovative entertainment and immersive storytelling and enhanced engagement experiences. Continuing to lead the dynamic kids’ space is a testimony of our thought-through business and content strategies. With the launch of Chikoo aur Bunty, we will add further width and depth to our portfolio of ‘Made in India IPs’ and provide impetus to our mission of entertaining kids and creating an evolved kids ecosystem.” — Nina Elavia Jaipuria, Head of Hindi Mass Entertainment & Kids TV Networks, Viacom18.

“At Nickelodeon, our journey with local content kicked off almost a decade ago. We have always introduced our young viewers to storylines and characters that are relatable, engaging and clutter breaking. The success of our past IPs reinforces our commitment and drive to serve our young audience with content that continues to raise the bar. The launch of our new IP, Chikoo aur Bunty, will showcase a realistic representation of the relationship between two siblings who compete for the smallest of things but love each other equally. We look forward to enthralling kids with this unique concept of sibling rivalry and unlimited dose of comedy.” — Anu Sikka, Head – Creative, Content & Research, Kids TV Networks, Viacom18.

Chikoo aur Bunty joins “Made in India” Nicktoons such as Ting Tong, Golmaal Jr., Motu Patlu, Shiva and Rudra. The last IP launched, Happy & Pinaki – The Bhoot Bandhus was also a runaway hit, consistently appearing in the top 10 highest rated slots of the category every week since its launch. The network boasts h 700+ hours of local content.

Media Prima’s content arm Primeworks Studios and WAU Animation is teaming up with Disney+ Hotstar for Ejen Ali Season 3. The announcement marks a major milestone for the Malaysian industry, as the country’s first animation property co-produced by the streaming platform. “We are honored to have Disney+ Hotstar signing-on as a co-producer of Ejen Ali Season 3 as it represents a significant endorsement for the Ejen Ali brand,” said director Usamah Zaid Yasin, CEO of WAU Animation. “It has been a lifelong dream for all of us at WAU Animation to create a truly Malaysian hero with all our uniquely local story sensibilities and cultural influences. Just as the many Disney animated films have inspired us, we hope Ejen Ali’s visibility alongside the iconic Disney characters on Disney+ Hotstar will then inspire the next generation of Malaysian creators to tell their stories in the animation medium. We cannot wait to see the reactions from fans when Ali’s next mission is revealed in 2022.”

Following the events of Ejen Ali The Movie, S3 sees Ejen Ali and the young Ejens from MATA Academy as they are reunited for a secret Ejen competition, the MATA Arena. Joined by several diverse recruits from MATA’s international division, Ali strives to pursue his late mother’s path of becoming MATA’s best but struggles to cope without IRIS. Meanwhile, Rizwan grows wary as he discovers a new threat looming over Cyberaya. The award-winning animation series is expected to hit screens in 2022 in four territories: Malaysia, Indonesia, Singapore and Thailand.

Russia’s oldest animation studio SMF Studio (Soyuzmultfilm) is staying in demand, celebrating its 85th anniversary year with a raft of deals from MIPCOM for a number of its series and classic short films.