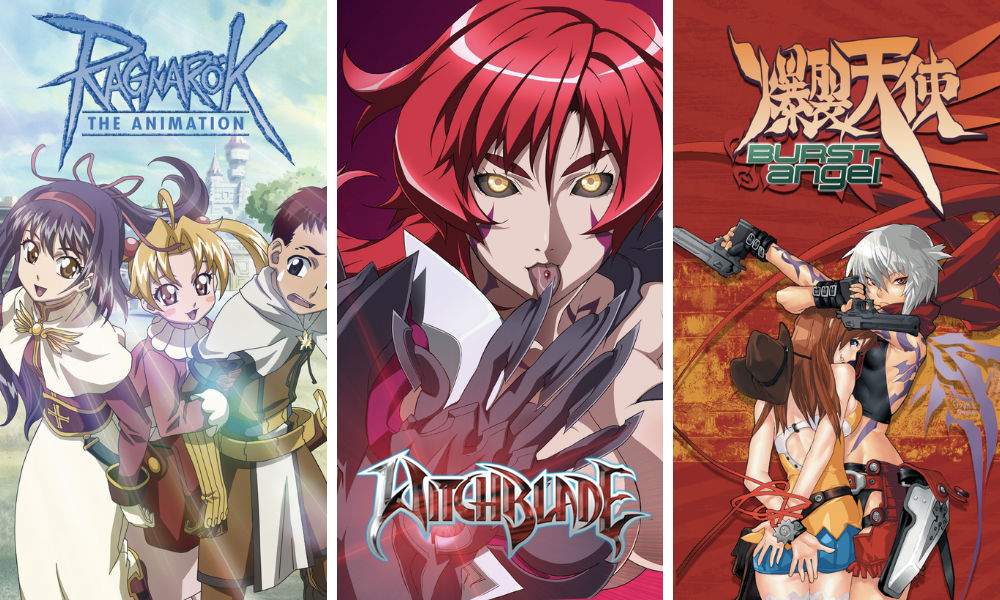 Fans of classic anime will now get a triple dose of action-packed adventures with the release of more than 70 episodes from the hit series Ragnarok – The Animation, Witchblade and Burst Angel for a limited time on the YouTube channels for Funimation (in the United States and Canada) and Gonzo K.K. (in Japan). All three series will be available to fans for free until November 30 and subtitled in English.

Based on the worldwide hit 2002 MMORPG video game and currently streaming ad-free on Funimation, the fantasy adventure series Ragnarok – The Animation can now be seen for the first time in HD during its limited run on YouTube.

Funimation also announced this week that it is kicking off Hispanic Heritage Month (September 15 – October 15) with enough anime to keep Spanish- and Portuguese-speaking fans in the United States and Canada celebrating and binge-watching all month long.

The service will add 1,000+ new episodes with subtitles and more than 600+ episodes dubbed, all beginning in September. So, popular titles like My Hero Academia, Demon Slayer: Kimetsu no Yaiba and Attack on Titan can be enjoyed by a wider audience than ever. Other titles added in Spanish and Portuguese include Cowboy Bebop, Fullmetal Alchemist, Wonder Egg Priority, SK8 the Infinity, Higurashi: When They Cry and Akudama Drive.

Funimation began making Spanish and Portuguese subtitles and dubbed episodes to audiences in the United States and Canada earlier this year.

“Funimation is dedicated to serving anime fans wherever, and however they want, and that includes our audience  who prefers Spanish,” said Rahul Purini, Chief Operating Officer for Funimation Global Group. “The stories and themes that anime conveys are universal, and Funimation knows that Hispanic and Latino audiences love their anime. The addition to our content library is just one of the ways we are celebrating Hispanic Heritage Month.”

“I am so, so excited that the Latin anime community can experience their favorite shows dubbed in Spanish,” said Anairis Quinones, voice of Mirko in My Hero Academia. “Our community has loved anime for the longest time and is a huge supporter of anime. I’m happy that the industry can give back with more opportunities to experience anime and even be a part of it! Keep an eye out for My Hero Academia‘s Spanish dub! ¡¡Plus ultra!!”

“Growing up watching English dubs of anime, it was rare to see any Latino voice actors in the credits, let alone Latino voice directors,” said Emily Fajardo, the voice of Eua in Higurashi: When They Cry – GOU. “I couldn’t be more grateful for the opportunity to direct and act in dubs and to help make anime more accessible to people from all different backgrounds.”