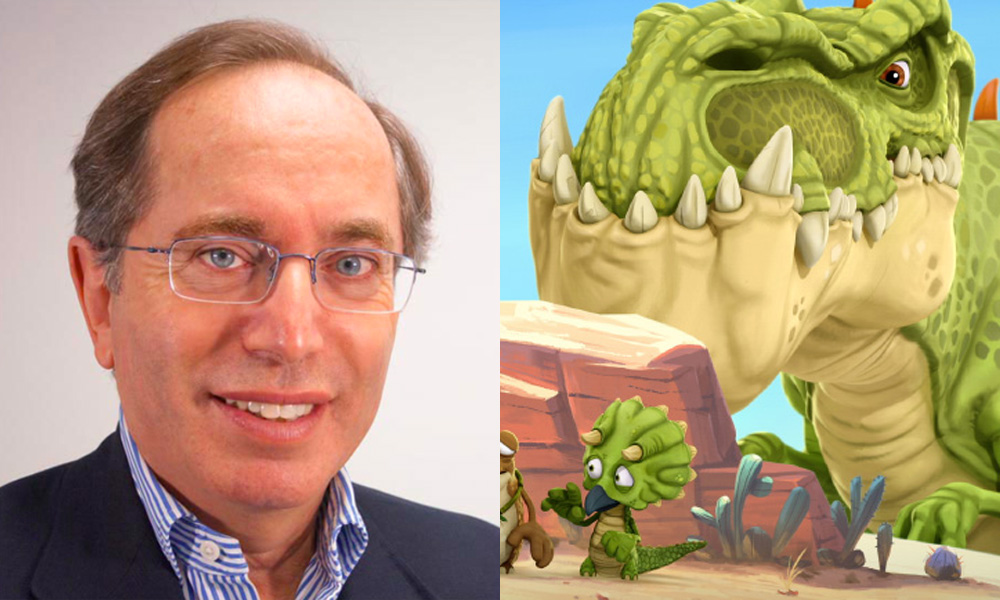 If you run into Pierre Sissmann, CEO and founder of Paris-based animation company Cyber Group Studios, at Annecy, make sure you shake his hand and congratulate him on his company’s fantastic year. The studio’s new show Gigantosaurus has been performing very well in the U.S. since it debuted on Disney Channel in December. The CG-animated 52 x 11’ show, which won the Pulcinella Award for upper preschool series at this year’s Cartoons on the Bay festival in Italy, centers on four young dinosaur friends exploring their prehistoric world and the mystery of the biggest, fiercest dinosaur of all.

The show is based on the best-selling books by Jonny Duddle, and is also broadcast on Disney Junior worldwide (excluding India, China and Taiwan), with upcoming premieres on major networks around the world, including France Télévisions, Germany’s Super RTL, RAI (Italy), SRC (Canada), as well as on Netflix in the majority of territories worldwide.

But things are just beginning to roll for the dino-centric project. “We are planning to do more episodes, of course,” says Sissmann, during a recent phone interview from this Paris office. “But the big news is that we are developing a major Gigantosaurus feature film, with screenwriter Michael J. Wilson, the creator of the Ice Age franchise. Longtime Cyber Group collaborator Olivier Lelardoux, who has worked on many of our shows (Zou, Zorro the Chronicles, Manon, etc.) will be directing the movie. We’re also working with art director Pierre-Alain Chartier (The Little Prince, Arthur and the Minimoys), so we’re very excited about our future plans.”

Sissmann says Gigantosausus, which will be the first big feature project for the studio, will also feature lots of catchy songs, just like the TV series does. “We’re going to work with the same people who did the show’s theme song and add some major musical talent for the U.S. and U.K. version of the movie.”

According to the animation veteran, the movie will introduce several new characters, explore the world of Gigantosaurus deeply and target a slightly older audience. “I began my career at Disney, working on movies such as Tarzan, Hunchback of Notre Dame and DuckTales: The Movie,” he adds. “So for me, it’s going full circle and returning to my feature roots.”

Sissmann says he and his team began working on the film’s script last September and hope to deliver the movie by 2021-2022 after the second and third season of the series have aired internationally.

The show’s master toy licensee, JAKKS Pacific will launch a full range of Gigantosaurus toys including preschool playthings, figures, vehicles, playsets, outdoor seasonal, indoor furniture and Halloween costumes and accessories this fall. In addition, Outright Games is developing and publishing a video game based on the franchise that will be available for PlayStation 4, Xbox One, Nintendo Switch and PC. The game will feature the four dinosaur heroes (Rocky, Bill, Tiny and Mazu) in a new story. Geared towards kids and families, the debut game brings players directly into the world of Gigantosaurus, as they zoom through the series-inspired locations and engage with the storylines.

“We are working closely with them to develop assets for the video game at the same time as we’re producing them for the TV series,” says Sissmann. “We started our video game division about a year and a half ago so we could develop this cynergy between us. Right now, we plan to release three titles in 2020. I’ve seen the demos, and I have to admit they look pretty amazing.”

Sissmann says there are also developing over 40 different print titles, including activity books and novelizations, which will be released in the course of the next three years. Cyber Group will announce four major licensing partnerships at Licensing Expo in Las Vegas in June.

“It’s a truly massive brand-building effort for us,” he adds. “This also includes a series of high-quality digital shorts we’re producing for Disney Junior’s YouTube. It has a big promotional value. They are all completely original stories, they expand the world of the characters and offer useful facts about dinosaurs. We’re also planning a worldwide Gigantosaurus tour in 2020, which is part of our big, integrated brand-building initiative for this massive property.”

Sissmann is also excited about Cyber Group’s new ventures in China, India and Russia. “We are investing to make our brands more global,” he says. “It’s about vertical integration and producing locally in different countries. If you put yourself out there and extend your arms and legs, you have the chance to grow and learn more from all your partners.”

Wrapping up the interview, Sissmann adds, “At the heart of what we do is providing quality entertainment to kids and families all around the world in a safe environment. For me, our preschool series Zou was our first major global brand, and it was a real eye-opener. It’s the same notion with Gigantosaurus: It’s about giving kids the chance to have fun and learn something at the same time. When I get mail from audiences, it brings home the reason we create these shows in the first place. It’s about bringing happiness, education and entertainment to kids around the world.”

More Hits on the Way!

Gigantosaurus is only one of several hot properties happening at the studio. Here are some of Cyber Group’s other big newsmakers:

Sadie Sparks. A 52-part series about a young girl who realizes she has magical abilities and becomes a wizard-in-training, with the guidance from a grumpy ancient rabbit, Gilbert. Co-produced by Brown Bag Films in Dublin, the series is set to debut later this year on Disney Channel.

Taffy. The studio’s retro, slapstick show centers on a trickster racoon who disguises himself as a cat to infiltrate the comfortable home of super rich Mrs. Muchmore and her pampered dog, Bentley. After making a big splash at MIPCOM last year, the show has been performing very well on Boomerang. A second season is in the works.

Tom Sawyer. Based on Mark Twain’s enduring character, this 26 x 26’ 2D/CG series addresses important issues such as growing up, freedom of spirit and the importance of an inquisitive nature. Produced at Cyber Group’s new studio in Roubaix, which opened in northern France last November.

Droners. A new adventure series for TF1, co-produced by La Chouette Compagnie and Supamonks, which follows the adventures of a group of young drone racers who are on a mission to save the planet from global warming and ecological destruction.

Digital Girl. Created by Pierre Sissmann and Sylvain dos Santos (Droners), this 26 x 22’ CG series tells the story of 14-year-old Chrissie, the first ever digital superheroine. Alexis Briclot, renowned for his designs onCaptain Marvel, Thor, Ant-Man and Avengers, is signing off the graphic bible. The show finds Chrissie challenged by Hack Girl, a digital supervillain, as she tries to restore ecological balance and a peaceful community life in a futuristic, yet contemporary world. Co-produced by famed Russian studio Soyuzmultfilm.

Magic Chess Odyssey. This 26 x 22’ CG series tells the story of a chess board with supernatural powers that can change the lives of children around the planet. While a pure entertainment piece, Magic Chess Odysseycombines storytelling with ground-breaking animation while immersing kids in the real intricacies of the great chess competitions. Co-produced by Soyuzmultfilm.