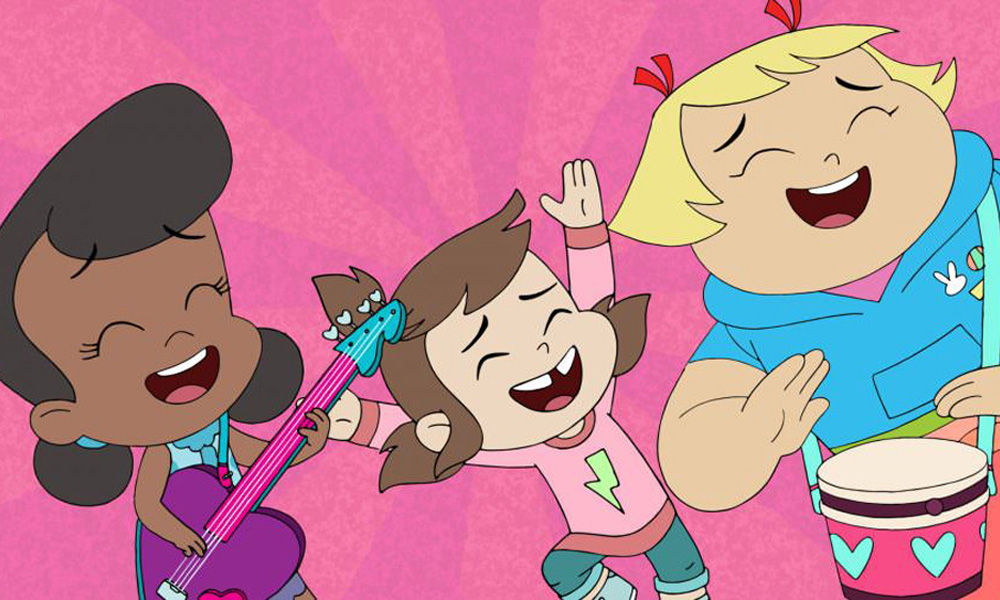 Animation Magazine had a chance to talk with composers Jay Vincent and Ryan Lofty, who are the music masterminds behind DreamWorks TV’s DreamWorks Animation TV’s Harvey Girls Forever (called Harvey Street Kids in the first season). The second season of the show arrives on Netflix this Friday, May 10. The show’s spirited heroines get to meet their favorite boy band, go toe to toe with evil older sisters, and maybe even make some new friends in these new episodes.

Animag: OK, so first up, please tell us about your latest project.

Jay Vincent: Harvey Girls Forever is a modern reimagining of three classic leading ladies from the Harvey Comics: Audrey, Dot and Lotta. It’s basically your childhood as a cartoon, with incredibly clever writing and hilarious performances. It’s also very music-heavy with respect to both score and songs; we even got to make an entire ‘90s boy band discography. 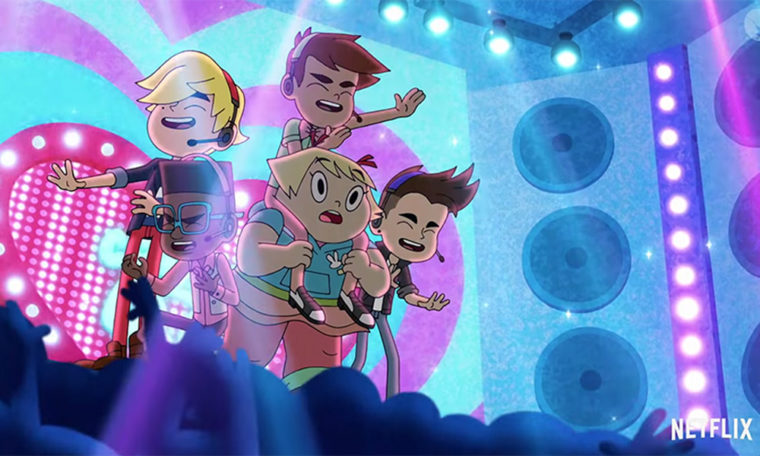 How did you land this assignment?

Vincent: I had been introduced to DreamWorks through some mutual collaborators Dan & Kevin Hageman (Ninjago, Trollhunters, The Croods 2). Of course, that was just the beginning, as there is a competitive vetting process for each new show. Harvey Girls Forever seemed to be particularly fitting for me and the core team I love to work with, as each portion of the score’s needs played perfectly into each of our strengths.

Lofty: As part of the pitch, DreamWorks asked to hear boy band sounds and electronic songs with vocals — I came in to collaborate on these parts. We are working on multiple projects together now and I think we are getting hired because our skill combination is unique. Jay had spent years composing for Ninjago and other story-focused properties, while I spent those same years songwriting and producing. He has a special talent for storytelling, together we can create cool-sounding music that shapes to picture and makes it pop.

Vincent: Ryan and I have known each other since we were kids and had been talking about working together for a long time. This seemed like the right project to start with because of his background as a pop songwriter and producer. He was able to bring a wealth of experience to the table as far as the conventions of contemporary music production — from songwriting, to the methodology of mixing vocals, to finding all the little boy band production goodies that instantly scream “1998!” It’s a good partnership that brings out the best in both of us.

What would you say was the biggest challenge in creating music for Harvey Girls Forever?

Vincent: Aside from tackling the weekly musical cocktails (“Broadway torch ballad about conjunctivitis? …Great!” “Baby raccoons in a ‘60s girl group? …Let’s do it!”) one of the big challenges was creating the sound for the crown jewel of our song catalog, Crush4U. While the show is a comedy, we needed to be serious about embodying the authentic boy band genre while still ultimately using it for a comedic purpose. The show definitely has fun with the boy band archetype, and the acting performances are hilarious (piece of advice: don’t go into a recording session with Joey Fatone without an oxygen tank, because you will run low on air from laughter). However, we were on strict orders to stay true to the sound of late 1990s boy bands without falling into parody — rather, the lyrics (courtesy of our showrunners and screenwriters) were to supply the comedy. In other words, these should sound like fully viable pop songs from a musical standpoint. So it was a careful balance to maintain.

Lofty: Producing Crush4U was also a logistical challenge. A lot of precise vocal layers and harmonies are needed to achieve the boy band sound, but due to everyone’s schedules we had to record each vocalist separately. We were under pressure to get perfectly matching rhythm and syllable takes with only 20-30 minutes to record per song. Our music supervisor Frank Garcia literally sat in some sessions with a stopwatch calling “Next!,” which was not stressful at all. 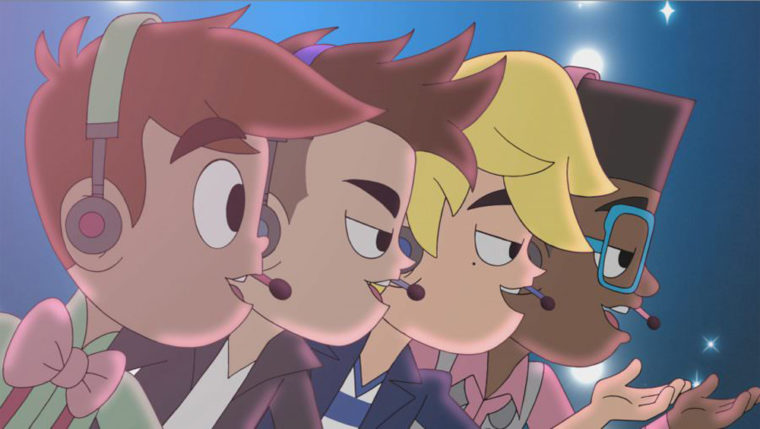 What did you love about this specific job?

Vincent: I love the creative climate; everyone seems to be in their prime and willing to take risks, willing to play and have fun. Brendan and Aliki are endlessly inventive and they love to challenge us music folk, almost like a fun game of “stump the composer.” I also hope we get a live Crush4U performance one day, because those guys sound amazing together, despite never having been in the same room.

Lofty: Literally everything. All the people we get to meet, all the different styles of music we get to write. Every day is different and I’m so proud of the work we do. I also really like the free food and the fountain at the studio.

How did you get into composing music for animated shows?

Vincent: I fell into animation mostly on accident, as my background was in live action. A series of random circumstances found me working on an animated pilot, which ended up turning into Ninjago. When that show became popular, suddenly I was known as an “animation guy” even though that was the one and only time I had done it. But I soon realized that I loved living in that world and the creative possibilities it presented. It’s the people that make the biggest difference — the passion and imagination are contagious. You know what animation folks are like!

Lofty: I went through a lot of music phases in my life, from playing jazz trumpet to being in rock bands, then doing the electronic producer/DJ thing. Animation wasn’t what I set out to do purposefully, but it kind of makes sense I’d find myself in this role where I get to wear a lot of hats, because I like a lot of things. There have been a few people in my career that have brought me up to each new level — Jay did that for me in animation composing. And I’m sure he’s learned a few things from me about songwriting, production, and dubstep.

What kind of advice would you give people who would like to get into composing music for animation?

Vincent: In short, four Fs. Be fluent — in the language of music and also the language of cinema. Be fast — schedules run quickly. Be funny — so much of the craft is to elicit laughter. Be flexible — always willing to try new things and quickly change directions if something isn’t working.

Lofty: Keep going, a lot is based on luck and you have to keep doing things until an opportunity comes along. And being a nice person helps.

Who are your biggest influences?

Vincent: My biggest influences inevitably come from my biggest obsessions, which usually involve the excitement of unexplored places. First it was The Lion King when I was a kid, which just transports you to such a specific place from the very first note. Next was probably the Lord of the Rings trilogy — I didn’t start listening to opera until college, so that was my first real exposure to deep, multilayered storytelling using themes. I also really love what Peter Gabriel has done with all his musical world travels and collaborations, finding greatness in every corner of the globe and blending diverse elements together without compromising their integrity. Maybe that’s why I wind up with so many gigs like Harvey Girls Forever, where constant learning and exploration are a requirement of the job.

Lofty: I’m inspired by people who walk the line between artist and media composer like Junkie XL, Trent Reznor, Ludwig Göransson and Danny Elfman. For song production, Calvin Harris and Max Martin are major inspirations, and I spend a lot of time listening to what’s new on Soundcloud and Apple Music. For who literally influences my music the most, Jay and David (another composer we work with). We create the sounds together.

How would you describe the contemporary animation music scene?

Vincent: It’s sort of like the Wild West, in a good way. Right now there are lots of people producing shows with some very eclectic tastes in music, so we’re seeing styles and blends of styles that may have never shown up in animation 10 or 20 years ago. So there can be just as many viable styles as there are shows, and some of it is really compelling.

Lofty: I would say “collaborative.” When I first started out as an animation composer I reached out to successful people in the industry and ended up visiting the studio of Alex Geringas, who did Trolls and Home for DreamWorks TV. We shared music and had a great conversation about dealing with rejection. He was very supportive. I don’t know many industries where people will openly share their experiences. It had a lasting impact on me.

Vincent: Ninjago is still alive and well, we’re now honored to be Cartoon Network’s longest-running show. Last year I started up with the crew of Subway Surfers and we’re looking to do a 22-minute format for that. And then Ryan and I are partnering up on a new series for DreamWorks, which should be announced sometime soon. So, I’m very much looking forward to taking our collaboration to new heights, including animated features.

Lofty: Yes, Jay and I are co-composing the music for a new series and the team is giving us a lot of freedom to explore electronic genres – future bass, dubstep, grime, jungle, drum & bass, complextro and even riddim. I’m also working with my wife Courtney as series songwriters for another project which I’m not allowed to talk about yet – so, TBA!