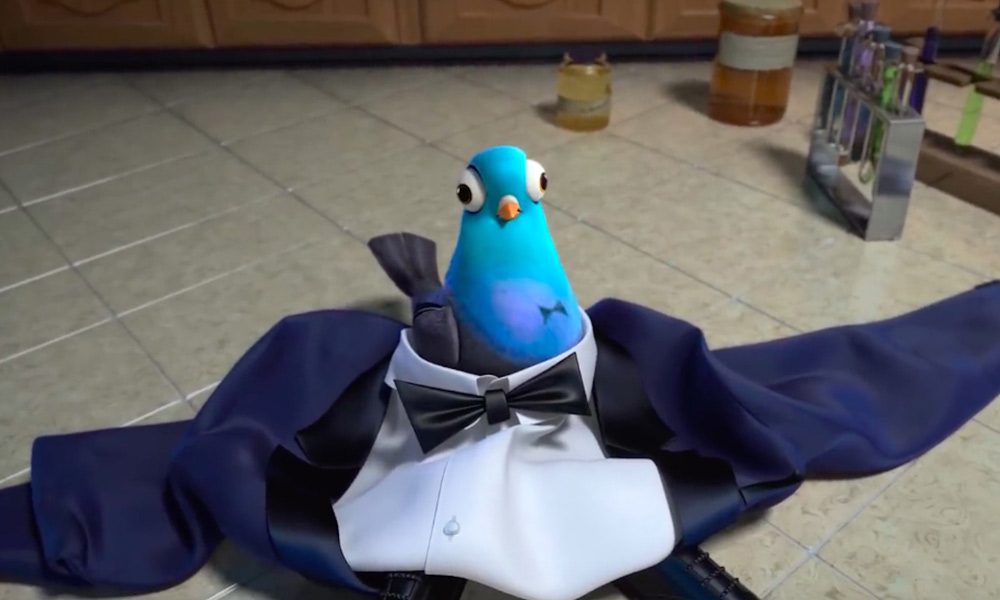 Stuttgart: ITFS Ventures in VR, ‘Spies in Disguise’ at FMX

New technologies for the creative industry will be under the spotlight at the Stuttgart International Festival of Animated Film (ITFS; www.itfs.de/en), which will introduce attendees to seven companies working in virtual reality, artificial intelligence and blockchain. The 26th ITFS takes place April 30-May 5.

Prior to the Trickstar Professional Awards on Friday, May 3, ITFS will host its first conference on VR, AI and blockchain directed at representatives of the film, animation and games industry. During this afternoon, enterprises, start-ups and projects from across Europe providing important new ideas to the creative industry – especially within the animation, VFX and games economy – will make presentations.

The benefits – especially in relation to big film data banks, online platforms and digital channels of distribution – are obvious: a targeted scaling and focusing in the distribution of works becomes possible, all parties involved benefit from enhanced security, increased transparency, and a fair profit participation. With the help of artificial

intelligence, an evaluation of whether and in which target group a film could garner success can be made during production, which enables creative people to tell more inventive, daring and innovative stories. At the same time, the technology provides possibilities to distribute and finance formats with more independence from the streaming giants.

New narratives and business models have already evolved in the VR sector and they are continuously developing. The conference will introduce a VR multiplayer project that already has more than 204 location-based units in 19 countries on six continents, and creates new immersive, interactive possibilities of gaming in cinemas and shopping malls.

Products, services and brands are in continuous demand for new communication modes to lift them out of the media whizz in a more dynamic and emotional way also attracting customers. One of these modes is visualisation in real time – from photo-realistic to artificially stylised. The whole range of applications and how employing modern gaming engines contributes to it, are presented on the basis of a few examples.

Pietro Triscari, Dserv (Tübingen): The software company explores AI in the sector of marketing and automation of design processes.

Tilman Scheel, The Reelport GmbH (Cologne/Berlin): The company develops platforms for film uploads for festivals and film markets and has, among other things, developed the Online Animation Library with the ITFS and Stadtbibliothek Stuttgart – the biggest password-protected online film database for animated films in the world.

Marc Wardenga, EuroVideo Medien GmbH (Munich): Developer of the game for the Schleich brand and animated film project Bayala, which illustrates the increasing connection between games, animation and toys.

Running alongside ITFS from April 30-May 3 is the FMX Conference on Animation, Effects, Games and Immersive Media (www.fmx.de/en), which has announced further additions to its program covering highly anticipated titles and great accomplishments of the past year.

In the The Art of Animation track, animator Jacob Frey and crowd artist Joyce Tong (both Walt Disney Animation Studios) will share some of the challenges they encountered when creating “Ralphzilla” for Ralph Breaks the Internet. Blue Sky Studios’ head of layout James Williams will give an inside look into the studio’s upcoming action-packed buddy comedy, Spies in Disguise. Andrea Block and Christian Haas (both LUXX Studios/LUXX Film) will dive into the details of their first animated full CG feature film Manou the Swift.

Curator Christophe Hery, research scientist at Facebook Reality Labs, brings together four experts for the Stylized Lighting & Rendering track to discuss the technical and artistic means of achieving appeal and explore the foundation of colors as a starting point to stylization. Bret St. Clair (Sony Pictures Imageworks) will kick off the track by exploring the look development of Spider-Man: Into the Spider-Verse. Erik Smitt, director of photography at Pixar Animation Studios, will explain how a stylized approach inspired by live-action cinematography came into play when creating the look of Incredibles 2. Christos Obretenov, CEO and shading architect at Lollipop Shaders, will discuss the development of custom shading plugins that provide non-photoreal shading & rendering in modern production renderers. Last but definitely not least, VFX supervisor Tarek Elaydi, (Arctiq Circle) will survey the physics and chemistry of color, and how these interactions are represented in today’s path-tracing renderers.

The Commercials track presents a selection of the greatest work from the past year. Adam Droy, VFX supervisor (The Mill), will give an insight into the creation of the spot Nike – Awaken the Phantom. In their talk, Wonderwoman and Chester Cheetah!, unexpected postproduction’s Managing Director Alexander Kiesl and Head of VFX Steffen Hacker will show a sneak peek of their shoots in Iceland, London, Warsaw and Cairo. The making of Penny’s Christmas Doesn’t Need Much. Only Love will be the topic of the talk by Glassworks Amsterdam’s Rüdiger Kaltenhäuser(director/head of 3D) and Darren Macpherson (director/VFX supervisor & senior 3D artist). Piglet Lucky, star of the VES-Award-nominated commercial Best Friend for PETA, will stand in the limelight in a presentation by CG artist/associate VFX supervisor Emanuel Fuchs, animation supervisor Bernd Nalbach and VFX producer Francesco Faranna (all Mackevision Medien Design and alumni of Filmakademie’s Animationsinstitut). Selcuk Ergen, Head of Effects at MPC Advertising, will present a behind the scenes look at the extensive VFX work that was involved in bringing Ridley Scott’s otherworldly ideas in Hennessy’s The Seven Worlds to life.

The AAA Game Design track – curated by Simon Jon Andreasen, Head of Animation and DADIU, The National Film School of Denmark – will highlight visual designers working on recent highly successful games and show how they craft the games, and where they believe the future will take design and creativity. Soren Lundgaard, CEO of Ghost Ship Games, will explain how his Deep Rock Galactic team delivers hundreds of hours of procedurally generated caverns for up to four players to explore, pillage and survive while keeping players engaged and challenged – without multimillion dollar budgets. Mark Estdale, founder of OM, will share how his team works with the power of early casting, creates hundreds of hours of immersive dialogue and performances for story-driven games like Horizon Zero Dawn. Curator Simon Jon Andreasen, being an experienced AAA developer himself, asked friends and colleagues from the world’s leading AAA studios how they design fun evolving games, without just throwing endless upgrades at the player. In his talk Keeping It Fresh – Designing Versatile Mechanics that Never Grow Old, he will present the results of his survey.

Regarding the FMX Forum, FMX confirms Epic Games, the studio behind Unreal Engine, will be a Main Partner for 2019. The FMX Marketplace and Recruiting Hub are sold out. Epic Games/Unreal Engine, Blue Zoo, GritWorld, Nodal, Oracle Cloud Infrastructure, Shotsky, SWR Wissen and ZEISS will have booths on the Marketplace. Workshops will be offered by Amazon Web Services AWS, Microsoft Azure and Oracle Cloud Infrastructure. Further participants of the Recruiting Hub will be Electric Theatre Collective, The Mill, Topalsson and Umedia Visual Effects.