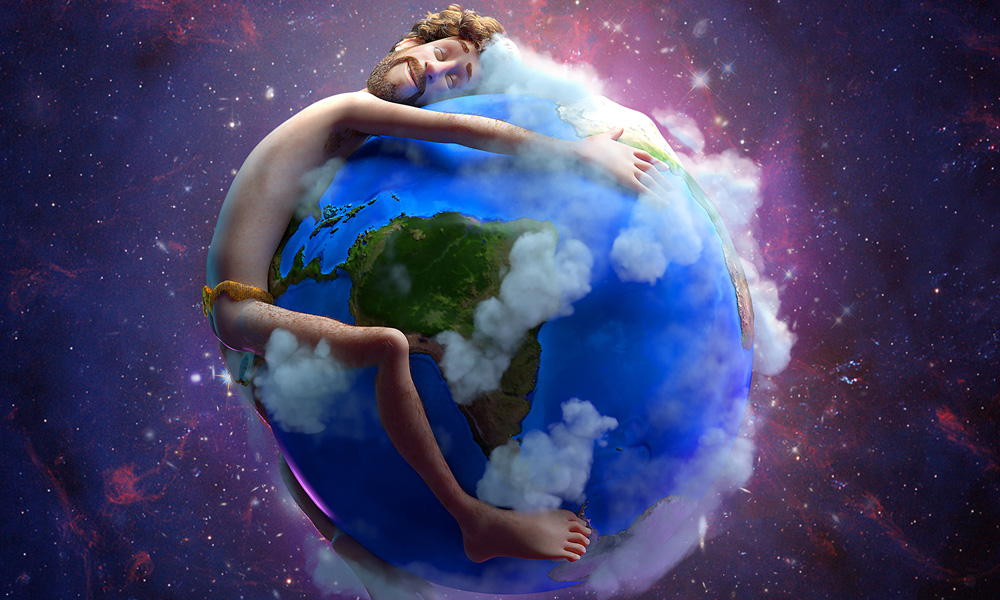 Multi-platform recording artist Lil Dicky (“Ex-Boyfriend”) is striking a musical blow for climate change action with the release of his new song “Earth,” produced by Benny Blanco and Cashmere Cat. Unveiled for Earth Day, the tune boasts more than 30 featured collaborators who are reinvented as all kinds of animals, plants and other living things in an accompanying animated music video (which you can catch at the end of this interview). The piece is co-directed by Nigel Tierney of Emmy-winning studio RYOT (Behind the Fence VR), Federico Heller of 3Dar (Uncanny Valley) and Iconic Engine. Tony Yacenda of The Directors Bureau, who directed Lil Dicky’s “Pillow Talking” and “Freaky Friday” videos as well as Netflix’s American Vandals, handled the live-action shots.

“Like a lot of people, I had a vague idea that something bad was happening here on Earth, but I didn’t really realize how insane our climate crisis is and how screwed humanity is about to be,” says Lil Dicky. “It’s full-on crazy! If we don’t get our act together now, and change a lot about our fundamental behavior, Earth will become unlivable alarmingly soon. Why did it take me so long to get wind of this? I feel like everybody on the planet should be talking about this 24/7. But that’s not the case. So I wanted to make the most entertaining and epic piece of content possible, to get everyone aware and talking. Because it’s now or never… Let’s save the Earth! We love the Earth!!!!”

Tierney has been tied to this ambitious project from almost the very beginning. “I was fortunate to meet Dave [Burd], a.k.a. Lil Dicky, around two years ago, and he shared this exciting idea of getting a ton of celebrities to come together on one track to make people like him actually care about climate change. He had an idea that each celebrity would play an animal, and I had pitched him on a whole bunch of different ideas varying from low-budget pop up style 2D animation to live-action shooting of the animals and doing mouth replacement. We ultimately settled on a feature-film-quality short that matched the appeal and caliber of the talent attached,” the director recalls.

“Finding the right home to create this project was the next challenge, but when I joined RYOT I knew this project was the perfect combination of beautiful storytelling, state-of-the-art animation, and making a large scale cultural impact to society; all of which aligned with RYOT’s ethos and culture. Zeda Stone, Head of RYOT, loved it and, well, the rest is about to become history.”

Lil Dicky and Tierney shared an exacting vision for “Earth”: a stunning visual world set within a “book-of-life,” where compelling characters could make the most of the song’s punchy lyrics.

“The dichotomy of playing with things like a super cute lion cub (played by Halsey) composed against the potential violent imagery of eating a zebra (played by Ariana Grande) or the matter of fact language of Zac Brown’s cow stating that we ‘drink milk from my tits!’ composed against the visuals of a sweet farm environment was the spine of this entire piece,” Tierney explains.

Of course, the vibrant colors and comic moments are meant to carry a very serious message. “Although it was such a treat working on this project we really had a huge responsibility to get this right,” Tierney adds, “and we worked painstakingly with Leonardo DiCaprio’s foundation and a team of independent scientists/advocates to insure that this video and the welovetheearth.org website that we created to accompany it were accurate, authentic, and provided everyone the opportunity to make a difference.”

Tierney and the RYOT crew worked closely with the 3Dar team, led by Partner and director Federico Heller, who set up camp at the RYOT offices. The studio also set up a dedicated “control room” for liaising between their own LA artists and those at 3Dar, which is based in Buenos Aires. The whole process was greatly facilitated by producers Michael Brocollo and German Heller, Tierney notes.

One of the big “selling points” of the music video is the jaw-dropping line-up of super star guest performers, who lend their voices to all manner of animals, as well as plants and some of the stranger lifeforms that make up our amazing planet which don’t often appear in warm ‘n’ fuzzy ecology campaigns.

“Dave’s super power is convincing celebrities to take part in things, and this is the utopian form of that. We decided the animals ahead of time; Dave had written them very particularly and when I was working through boarding those gags we would just pitch back and forth on who would work for each,” Tierney explains. “Of course, there were some easy ones — like Snoop Dogg playing the marijuana plant or knowing Lil Jon’s delivery would be killer for the Clam. Most artists were excited by the choices, but there were definitely some requests made. Now, whether we acknowledged those requests, that’s another question.”

It’s hard for Tierney to pick out a favorite among this musical menagerie. “Ed Sheeran’s Koala is just stunning and I really love the delivery of the line,” he begins. “I also love Kevin Hart’s portrayal as Kanye as it is such a fun joke. My five-year-old son, Nigel Jr., is obsessed with Justin Bieber’s baboon, in particular our choice to transition through his anus. Feel free to judge my parenting skills.”

Bringing in some of the unseen elements of our world proved a bigger challenge than a baboon’s butt, however: “We had a particularly difficult time with animating Lil Yachty’s HPV character, as Dave had a particular vision with how this character would look as it was dancing while also existing in the microscopic fluid. This character’s design and animation possibly had the most iterations, and our art directors’ — Ricky Baba and Patrick Moss — search history was ruined when having to research HPV and its movement.”

Between RYOT and 3Dar, close to 200 artists and engineers contributed to the video, as well as the live-action intro, website and additional content. Tierney notes that while the animation team worked on storyboards and concepts for over two years, the production period was a very rapid five months.

“We were literally doing frame paintovers hours before the upload to YouTube,” he reveals. “An impressively challenging thing around production was that we had to create over 60 complicated character assets that had to be rigged and have real fur which 90% of them only having 5-10 seconds of screen time. Pair that with a variety of environments such as oceans, jungles, and global monuments to complement and we ended up with a feature film level production to be squashed into a 7 minute short.

“We really had to be economical and leverage previz in a big way to lock in the exact framing of each character and the joke associated with it as we definitely didn’t have the time to allow for iterations. The only way this was possible was leveraging our brand new state-of-the-art 5G studio at RYOT to work through previz. It is actually the first production out of that pipeline. And we are already seeing the scale of that studio beginning to take place across our entire Verizon Media studio buildout.”

When it comes to the intersection of nature and animation, Tierney says there are two on-screen moments that have stayed with him. The first was the majestic, sweeping intro to Disney’s The Lion King. The second, he says, is Shrek.

“Specifically, the scene where Shrek was running through a field of beautifully rendered grass, I couldn’t help be mesmerized by how the sun interacted with each of the individual blades of grass. I actually said to my mother that day that I will work on Shrek 15 that day,” says the director, who was a teen at the time. “Fortunately, I didn’t have to wait that long and got to work on Shrek Forever After.”

Above all, the mission of “Earth” is to inspire people to make a difference, with the newly launched site WeLoveTheEarth.org serving offering steps that can be taken, like registering to vote for representatives driven to fight climate change, to lowering your carbon footprint, and signing the Global Deal for Nature. In collaboration with the Leonardo DiCaprio Foundation, net profits the song, music video views and merchandise go to aid select, frontline nonprofit groups like Quick Response Fund for Nature, the Shark Conservation Fund, the Solutions Project, the Global Greengrants Fund and the Carbon Cycle Institute.

“We want this to be a global phenomenon and cultural turning point for climate change,” Tierney asserts. “It’s why we enlisted over 30 global superstars with a variety of talent and fans such as Kris Wu, Psy, Bad Bunny, & even basketball athlete Joel Embiid. We want to turn the attention caused by this song for everyone to acknowledge and rally around the serious fact that climate change is real.”