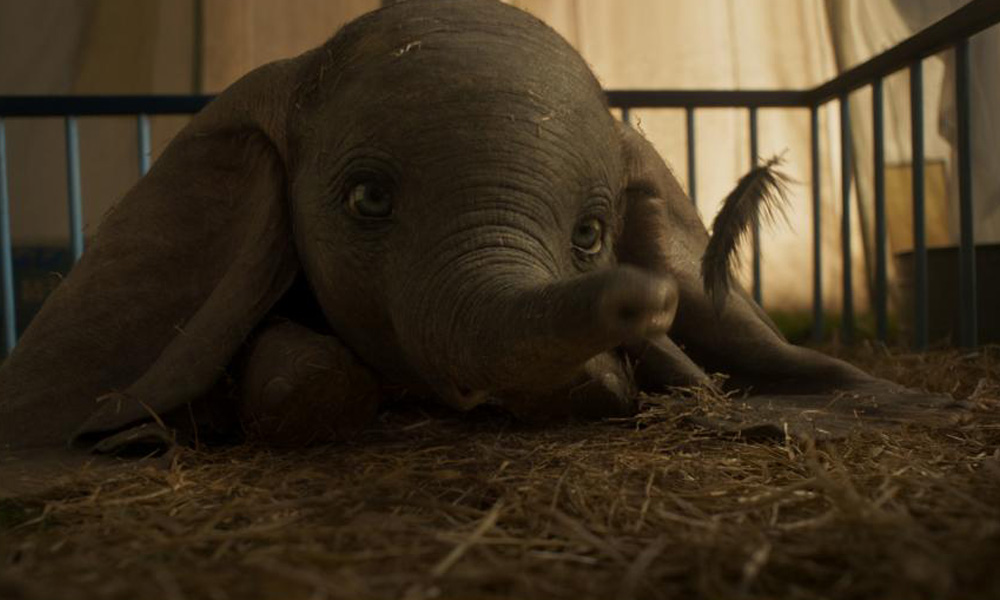 Many credit Tim Burton’s live-action version of Disney’s Alice in Wonderland (2010) for starting the big trend of re-imaging classic animated properties as live-action or CG spectacles. After successfully delivering reimaginings of Cinderella (2015), The Jungle Book (2016) and Beauty and the Beast (2017), the trend continues with Aladdin, The Lion King, Mulan and Dumbo; the last of which sees the flying circus elephant coming to life under the direction of Burton and three-time Oscar-nominated vfx supervisor Richard Stammers (Prometheus).

After collaborating with Ridley Scott (Alien: Covenant) on four movies, Stammers says he experienced a slower pace with Burton. He recalls, “I have spent two and a half years on this project, which is partly reflected on the fact that there’s a huge amount of animation to do; whereas we did The Martian in a year, from start to finish.”

The team began their work using extensive concept art developed by production designer Rick Heinrichs (The Last Jedi) in order to visualize the world that Dumbo inhabits. “My first important thing was figuring out what Dumbo was going to look like,” explains Stammers. “Is he going to begin at a newborn size? And when he flies, how big do his ears have to be? A lot of those things couldn’t be done just as a concept. You needed to see how it was in animation first. We started designing and animating him at the same time.”

High on the list of difficult tasks was making the massive pachyderm airborne. “You have to take the idea of a flying elephant with a pinch of salt, being the type of film that it is,” notes Stammers. “To try to sell that idea, we did look at his body and shape in relation to the size of his ears. We employed little cheats: For example, when he’s flying, his ears get 10 to 15 percent bigger.”

Obviously, there weren’t a lot of natural sources of inspiration. “We looked at bird flaps to see how that speed and movement worked, as well as slow-motion bees and manta rays, which have an elegant floppy wing . That was far more appropriate to what Dumbo’s ear was like because it’s boneless. Physics gets thrown out the door when you start looking at the reality of it. The other thing that helped was making it feel like Dumbo was putting a lot of effort into flying.”

High-resolution models were constructed for Dumbo and his mother (Mrs. Jumbo) that did not make use of the traditional stretch and squash approach for wrinkles. Stammers points out, “When you actually look at an elephant walk the pattern of where it stretches and wrinkles is different. When the leg is forward you get horizontal wrinkles, and when it’s back you get vertical ones. We had to make sure that we could animate that wrinkle change during the motion.”

The displacement maps that create the wrinkles in the skin texture were simulated on every shot. The artists at visual effects house MPC (Moving Picture Company) made an animated skin cache per frame for rendering. Stammers says, “It was quite a lengthy process and a lot of R&D was involved in developing a technique to give us that level of detail.”

Various methods were considered to get believable physical interaction between the cast and fully CG protagonist. “Our most productive option was using a performer,” reveals Stammers. “We found an actor named Edd Osmond who had a leg length that was the same size of Dumbo’s back legs. On all fours with arm extensions, he had the same proportions of Dumbo’s skeleton. My animation supervisor Catherine Mullan and I had a live microphone and earpiece to Edd so we could direct him on set.”

A wirecam rig helped to direct the attention of the audience for the stadium scenes. “Tim wanted to shoot POVs and shots of Dumbo flying, so we employed the use of a four-axis wirecam rig that was programmed based on a previs flightpath. We could use that to point forward to shoot a POV or point backwards to shoot a plate for Dumbo to be added into later.”

Other animals making an appearance courtesy of CG are a cheeky monkey called Barrymore, cobras, a wolf, bear, crocodile and python. “There were not creative issues with them because they’re all in cages not having to interact with anyone and do not get a lot of screen time,” states Stammers. “The adult elephants have much more of a presence, as some of the circus performers ride them. We had to have the ability to shoot the girls riding the elephants rather than trying to do them as elements later. We had [models of] full-sized elephant bucks that were being pushed around on wheels by our stunt team.”

According to Stammers, clean plates were also shot to add subtlety to the elephants’ movements as the rigs were moving smoothly on wheels. He adds, “We had to cut the girls out and give them jiggle to match our animation.”

Of the 1,800 visual effects shots that comprise the 93-minute-long movie, one thousand were devoted to set extensions. “The first part of our film takes place in a travelling circus, so in theory we’re in an outdoor location with real tents, but we shot everything on stage,” explains Stammers. “In a lot of cases we were extending tents beyond what we had as practical sets. The sky became an important part of the design for Tim to the point where he wanted to make sure that every sky in every scene was nicely designed and fitted into the storybook look that he wanted to have for the whole film. Tim didn’t want it to appear like we went on location and shot a real circus. He always felt that because Dumbo is an unusual character, he wouldn’t sit well in a completely real world. He wanted to have that ability to make an Expressionistic world that is slightly surreal in places.”

Another vfx challenge involved Holt Farrier (the character portrayed by Colin Farrell), who is a war veteran and former circus star who has lost an arm during combat. “Rodeo FX became our sole vendor for creating Colin Farrell’s digital amputation,” remarks Stammers. “We weren’t able to shoot anything that simply allowed us to paint out an arm in a green sleeve. A large part of his body had to be replaced and that involved some complex body match move, tracking, cloth simulations, and getting a good match to the costumes he’s wearing.”

Other vfx work included Framestore building the huge 3D environment of Dreamland theme park. The team at Rising Sun Pictures also created a visual homage to the pink elephant scene from the original 1941 movie. “They had to do it without any connotations of Dumbo getting drunk or involving alcohol in any way,” notes Stammers.

The movie also includes several scenes where characters ride Dumbo. “Eva Green plays circus aerialist Colette Marchant, who gets to fly Dumbo in the third act,” Stammers explains. “In terms of a process, it involved us [doing] a lot of pre-animation so that we could program a motion base. So, she could be riding on a buck that moved in the way that Dumbo did, so when her element was shot, we could stick Eva with Dumbo in a realistic way. That involved complex virtual camera setups to build a pipeline to allow us to photograph her in a correct way. This motion base that we were using was fixed to the ground, so we had to fly cameras towards her to give her the appearance that she is flying past us, and that involved programming a Spidercam rig. These shots were challenging to make and awesome to see come together.”