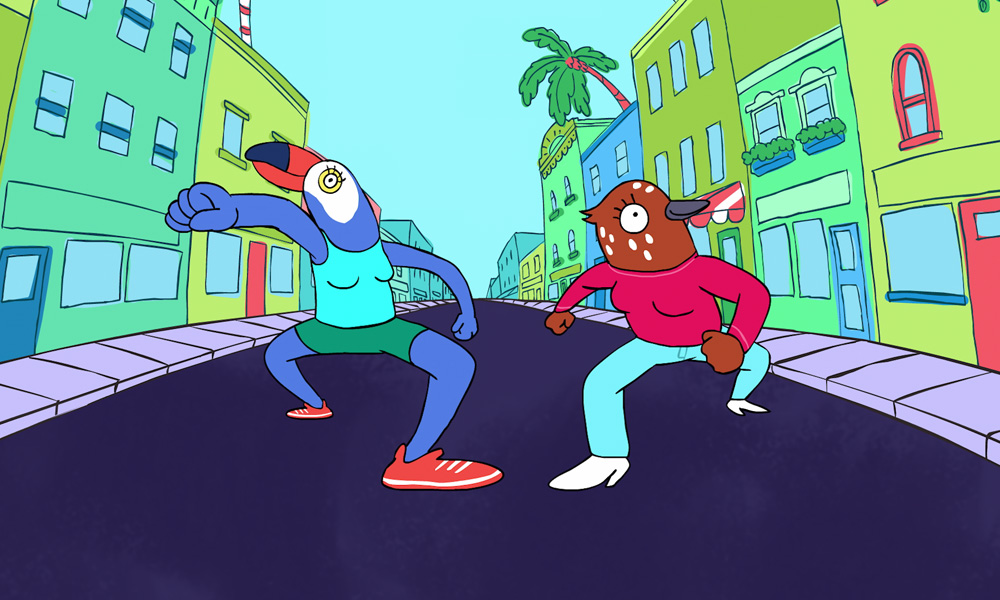 Fans of witty, beautifully drawn animated shows for grown-ups will soon have a new reason to binge-watch Netflix: Cartoonist Lisa Hanawalt’s new show Tuca & Bertie, which features the voices of Tiffany Haddish and Ali Wong, is set to debut on the streaming service May 3. The show centers on the misadventures of two very different 30-year-old bird-women who happen to live in the same building.

Hanawalt, who is best known for comics such as Hot Dog Test Taste, I Want You and Birch Trees, is also the award-winning production designer and producer of BoJack Horseman. During a recent phone interview, she tells us that the idea for her new show was inspired by real-life birds. “I was watching this toucan stealing eggs and being very greedy on this nature documentary,” she recalls. “I thought she was kind of my id, so I put my worst behavior traits into this fictional bird character called Tuca. Bertie is a nice counterpoint to her, as she’s a more shy and reserved songbird.”

While the show is also exec produced by BoJack creator Raphael Bob-Waksberg, Tuca & Bertie definitely offers a vision of the world as seen through Hanwalt’s whimsical P.O.V. “The show is based on my own life experiences,” she explains. “I think my sense of humor is a little more gross than Raphael’s. We have more bodily liquids, and the writing is very funny, goofy and more absurd than BoJack. We have a more loosEy-goosey, childlike universe where objects come to life. We also mix in different types of animation — the show is 2D animated, but we also have claymation sequences and puppets in the mix!”

Working with actresses Haddish and Wong also opened up new possibilities for Hanawalt. “I wrote the first two scripts of the series without knowing that Tiffany and Ali were going to be involved, but once I knew there were going to do the voices, it became a lot easier,” she recalls. “I can write silly songs for them to song. There is a lot of great music in the show. I love writing silly rhyme-y things for Tiffany to sing!”

Like BoJack, the show’s animation is produced by ShadowMachine in Los Angeles and Big Star studio in Korea. Hanawalt says the look of the series will also be quite unique. “Our art director is Alison Dubois, who is a friend of mine and really understands my sensibility,” says Hanawalt. “Not only did she make the show very beautiful, it really looks very different from any of the other shows that are out there.”

Hanawalt says she’s very happy to be making an animated show that she herself would like to watch. “I think most children’s animated shows weren’t grown-up enough for me, and the adult shows were too harsh and nihilistic in their tone. On our show, the characters really love each other. Even the evil characters have some good qualities, and the good ones are flawed. There are heartwarming storylines and a lot of it is inspired by my own life and experiences.”

A fan of toons such as Ren & Stimpy, Beavis and Butt-Head and the films of animator Don Hertzfeldt, the 35-year-old artist is thrilled by what is happening in the animation world at large. “There are so many cool, new, even experimental shows coming up,” she explains. It’s wonderful to have so many different voices as more women and people of color are getting their shows greenlit. While a lot of the shows that I love are written by men, many of them don’t satisfy my desires as a woman.”

One of the show’s high-profile directors is Amy Winfrey, another BoJack Horseman veteran who is also well known for creating the series Making Fiends. “I feel so lucky that I got a chance to direct on Tuca & Bertie,” she says. “In general, adult animation tends to be a bit more tied to reality, so the free-wheeling cartoony style of the show is a refreshing change of pace. I love being a part of a show that has adult themes but also has room for plant-headed people and the occasional anthropomorphic baked good!”

Winfrey points out that although Tuca & Bertie is a script-based show, the artists are given a great freedom to come up with visuals to support the story. “Lisa trusts artists and values their contributions to the show,” she says. “We come up with jokes and pitch all sorts of odd little cutaways. We were able to incorporate different visual styles like cutouts, stop motion and object animation. At one point, I even got to write a silly little song for one of the episodes. Every day on the production was challenging but fun.”

Director Aaron Long (BoJack Horseman, TripTank) says he loves that they had the freedom to try anything as long they served the story. “The show was a truly collaborative experience where everyone was welcome to throw in their crazy ideas in order to make the final production the best it can be,” he says. “After a screening, one storyboarder said he could tell who directed each episode because he recognized our styles — which was exciting, because often in animation your work is kind of anonymous, even as a director. All these different sensibilities came together to create a versatile, flexible show that can do anything and still feel true to itself. This show has been the most fun I’ve had in my career so far, especially directing the main title sequence.”

Hanawalt says she and her team can’t wait for audiences to discover her new creations on Netflix. “It was also important for me to have a wide variety of people involved in the writing and making of the show,” she mentions. “We have all kinds of birds and different animals on our show. We even have plants that walk and talk and sing! My hope is that everyone will connect with the show, because it’s silly and surreal on the surface, but it’s very relatable and has a lot to say about women and friendship and real emotions.”

Tuca & Bertie premieres on Netflix May 3.