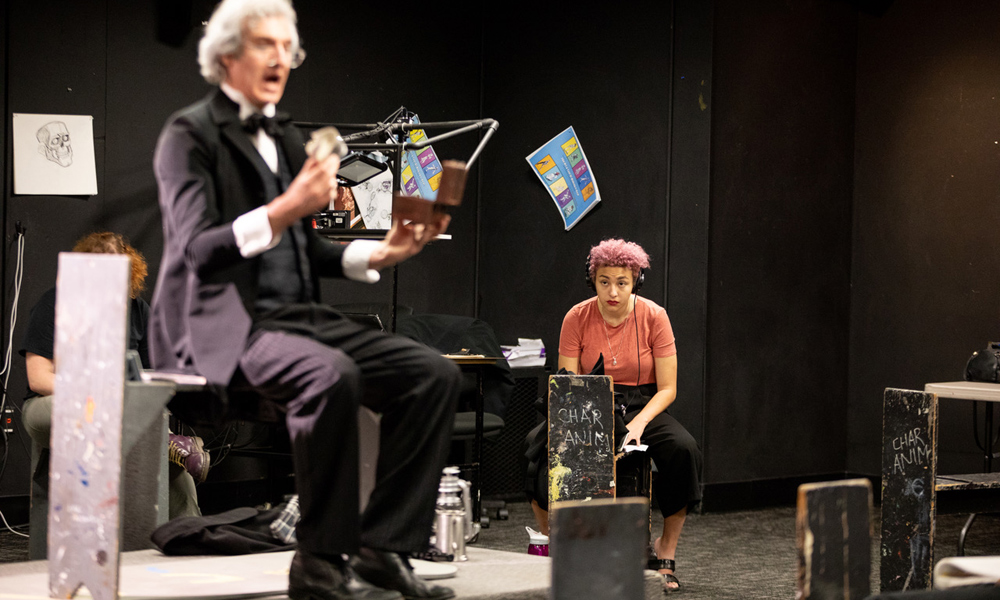 Learning from the Masters: Must-Take US Animation & VFX Classes

In an era when teachers can be rated like restaurants on Yelp, word spreads quickly when there’s a class that students consider a “must take.” At the University of Southern California in Los Angeles, adjunct professor Craig Barron has learned that students really do appreciate the advantages of learning from working professionals.

“Real-world experiences bring a lot of engagement to the education process,” says Barron, a Visual Effects Oscar winner for The Curious Case of Benjamin Button who has taught at USC for four years.

Barron, whose studio credits include ILM, Matte World Digital and the new media studio Magnopus, teaches a class called The World of Visual Effects. It’s designed to explore how effects have informed storytelling throughout film history, and how they continue to redefine the way movies are made. “I frame it in a timeline, so students can see how different techniques allowed moviemakers to tell different kinds of stories,” he explains.

Their explorations range from stop-motion creatures to CG avatars, and Barron traces the evolution from optical printing techniques and motion control to digital methods like global illumination and motion capture. He also delves into “hybrid” solutions like those used in Jurassic Park, in which physical techniques were combined with digital approaches to make innovative images. “We study different examples of when technology drives the art, and when the art drives the technology.”

“The way we define an art form is to categorize the evolution of it. There are still some viable practical techniques that students can take advantage of today,” he notes. “To have that type of understanding is a wonderful way to have a broader understanding of the craft.”

To help students understand the nitty-gritty of creating film illusions, Barron brings in guest speakers like John Nelson, who oversaw the virtual humans in the Oscar-winning Blade Runner 2049. “I want students to understand the things that make a shot work — or not,” says Barron. “This class is really about developing a way of seeing.”

Whichever creative field a student may be pursuing, a foundational truth is that all successful projects begin with a good script. And that doesn’t just apply to movies or television. At Ringling College of Art and Design in Sarasota, Florida, Writing for Games is designed to teach that skill to students interested in the field of interactive entertainment. Taught by Rick Dakan, whose design credits include the online video game City of Heroes, this class is focused on students gaining hands-on writing experience.

Dakan emphasizes the importance of knowing how to write a persuasive pitch document. “It’s a really good exercise to understand what is important about the ideas that they have. What does the player have responsibility for in their stories? I want them to focus on how gameplay will reinforce the stories they want to tell. That’s why someone plays a game instead of watching a movie.”

“Even in assignments where they write for games that don’t have to be made, I’m always talking about scope, because that’s part of the discipline,” says Dakan. “Writing for videogames is a working document. Their final project in the course is to make a choose-your-own-adventure text game in Twine, which is free software used in a browser. They have to write fairly simple code to map out all the different options, and they see the real work that interactivity brings.”

Attendance in this class is capped at around 16 students, and while it is popular with Game Art majors, it attracts students from Computer Animation and Film as well. In the three years Dakan has been teaching the course, he has seen an especially interesting trend: more women are being drawn to games. “I don’t see any difference in their enthusiasm or knowledge. The trend is getting better each year.” 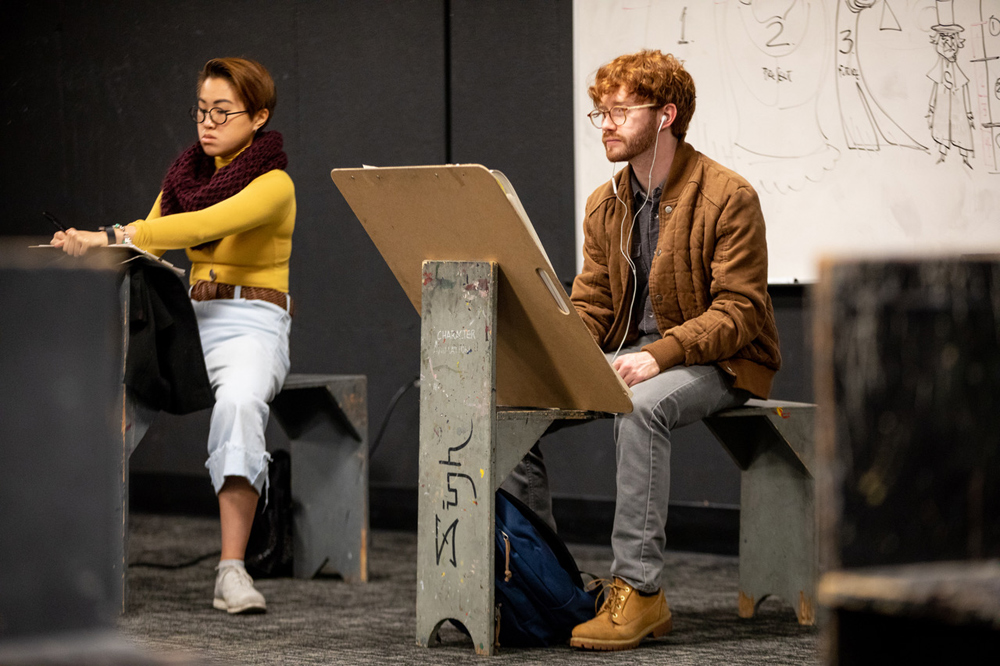 Few subjects could be considered more foundational in art colleges than life drawing, and that is especially true in the Character Animation Program of the

California Institute of the Arts in Valencia, California. At CalArts, Mark McDonnell teaches Life Drawing for Animation, and his approach echoes the aesthetic embraced by Walt Disney when he first envisioned the school decades ago.

“I think that as much as the technical aspects of animation have changed in the digital era, the principles are exactly the same,” says McDonnell, who has worked at Disney Feature Animation, Pixar and Sony, and has been honored as a Disney Master Instructor. He also authored The Art and Feel of Making It Real: Gesture Drawing for Animation and Entertainment.

In McDonnell’s CalArts class, students draw from live models. “I always ask them what a character is thinking. They have to find the soul, and how energy is moving in an elegant way throughout the body. The ‘Disney way’ is about the elegance of communicating an action. It’s not just about students observing what’s in front of them and drawing that. They’re acting in space.”

McDonnell, who has taught at CalArts for five years, explains that he does a lot of drawing in front of his students on a whiteboard. He feels that this process communicates the lack of permanence that’s inherent in drawing for animation.

“Hopefully, they see that the concept is more important than the drawing,” he notes.

Typically, McDonnell’s class has about 35 students, coming from many countries. “CalArts students have a different mindset, because usually they’ve been working on their foundational skills from a young age,” says McDonnell. “They’re more mature artistically.” One of McDonnell’s goals is to prepare them to deal with the pressure they’ll face working in professional animation. “I have kids come back and say they’ve learned so much in this class.” 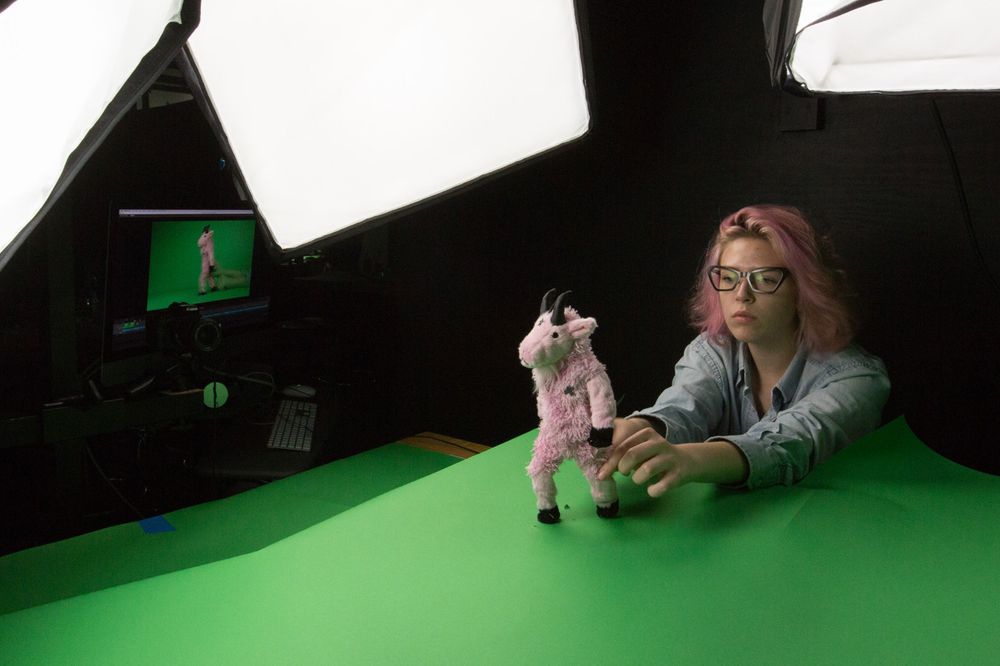 The ability to model and animate believable forms is fundamental to success in the digital age, but the challenges don’t end there. Being able to light and render those forms for seamless integration in a scene is equally crucial, and that’s the central focus for teachers Andrew Rowan-Robinson and Benjamin Jones at the School of Visual Arts in New York City. As longtime industry pros — Rowan-Robinson is a Creative Director and Head of CG at Framestore/NY and Jones is a CG Lead/Look Development & Lighting TD at Zoic Studios — they jointly teach SVA’s Lighting and Rendering elective.

“The art and craft of lighting is key to the course,” says Rowan-Robinson, whose credits include features like The Golden Compass as well as commercials for Pepsi and Nintendo. “I’ve taught this course for nine years and we’ve become very efficient. We look at the creative aspects of the mood and emotion of a scene in the lighting of classic movies.”

Students are also required to shoot their own plate photography, and then track a CG object or character and integrate it within the scene. “We use the Arnold renderer,” explains Rowan-Robinson. “It’s more physical capable than other renderers and there are fewer switches and dials.”

Enrollment in this class is typically capped at 16, and the projects are structured to mimic a production environment. “Everyone has to comment on each other’s work, like a professional review,” says Rowan-Robinson. “We want students to learn to listen to reviews, because once they’re working in the industry, they’ll get critiqued a lot. I want the students to understand that as long as something looks like it belongs in a scene, they can always make it look better!” 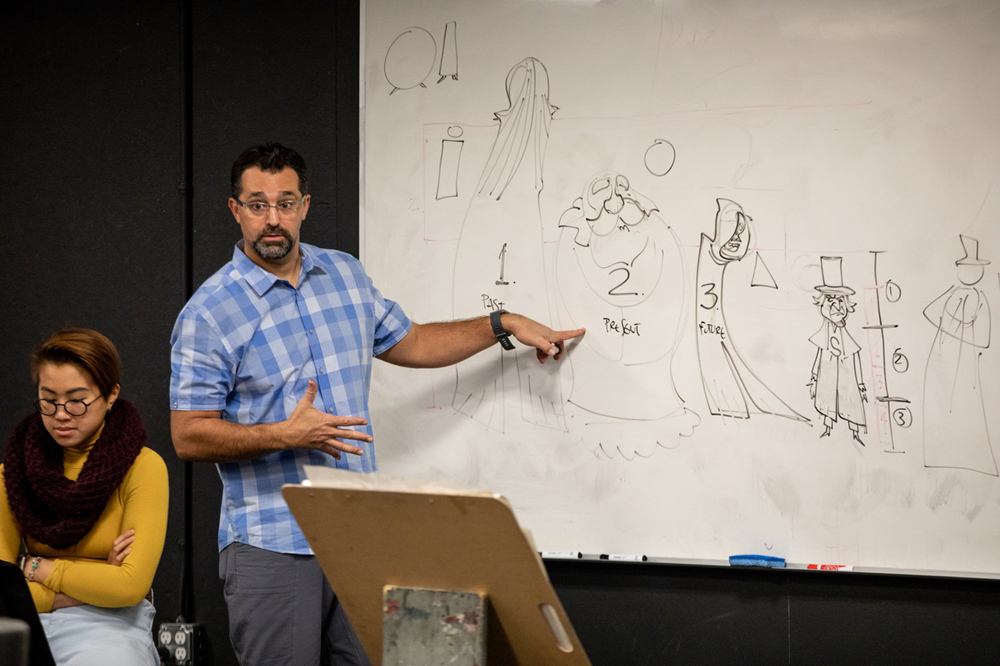 Using a class to simulate a production environment might well be the best way a college can prepare its students to face the challenges of the working world. That’s the thinking behind the Collaborative Project in Digital Media offered by the Savannah College of Art and Design in Georgia. Headed by Chris Gallagher, who earned his M.F.A. at SCAD and has worked at Disney, Digital Domain and Weta, the class is open to anyone attending SCAD’s School of Digital Media. “This is a massive collaboration class,” explains Gallagher. “It’s not just for those studying animation, but also visual effects, motion design and illustration.”

Gallagher notes that prospective enrollees must submit a reel and undergo an interview to ensure they have the necessary skills. “We run every class like a dailies session. We’ve had over 30 students, split into two sections — an animation side and a rendering side. We also highlight a lot of 2D animation.”

To give these students a taste of what they can expect when they’re ultimately working in the real world of production, Gallagher regularly invites some outside pros to take the role of external clients. “People from places like Google, The Mill and Disney Imagineering have come in as clients,” he remarks. Gallagher feels it’s an effective way for students to build the soft ‘people skills’ they’ll need to build successful careers.

“That’s why the classes are built around instilling that,” says Gallagher. “By week three or four in a collaboration class, they’ll experience problems, and I want to see how they work through them. You’re more valuable to a company if you’ve already solved these problems as a student!” 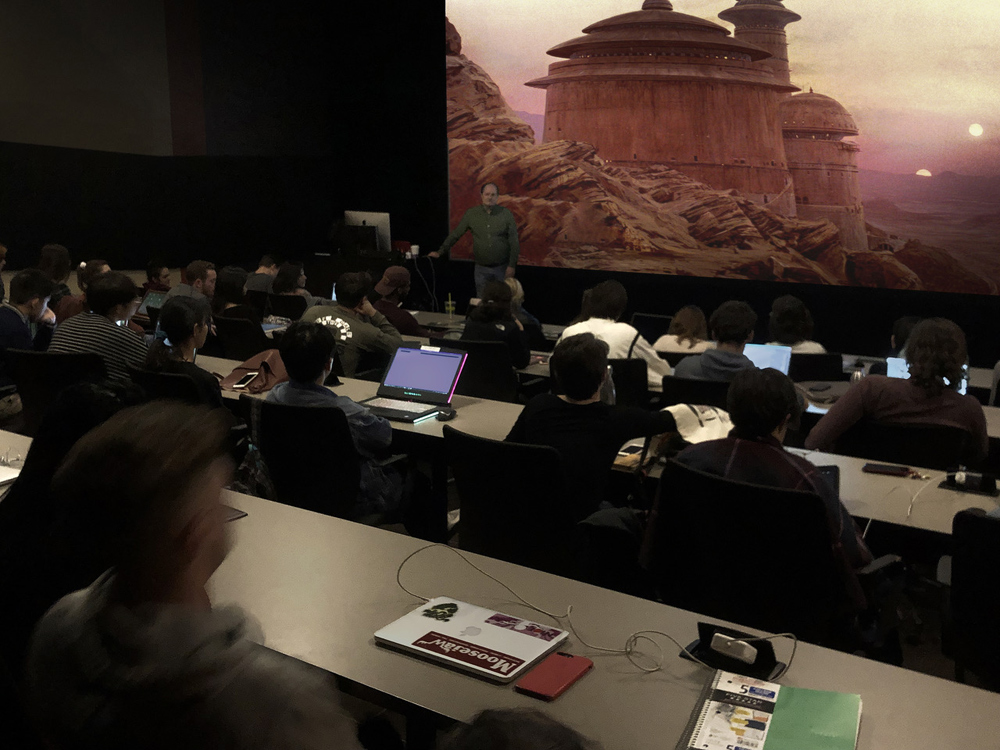