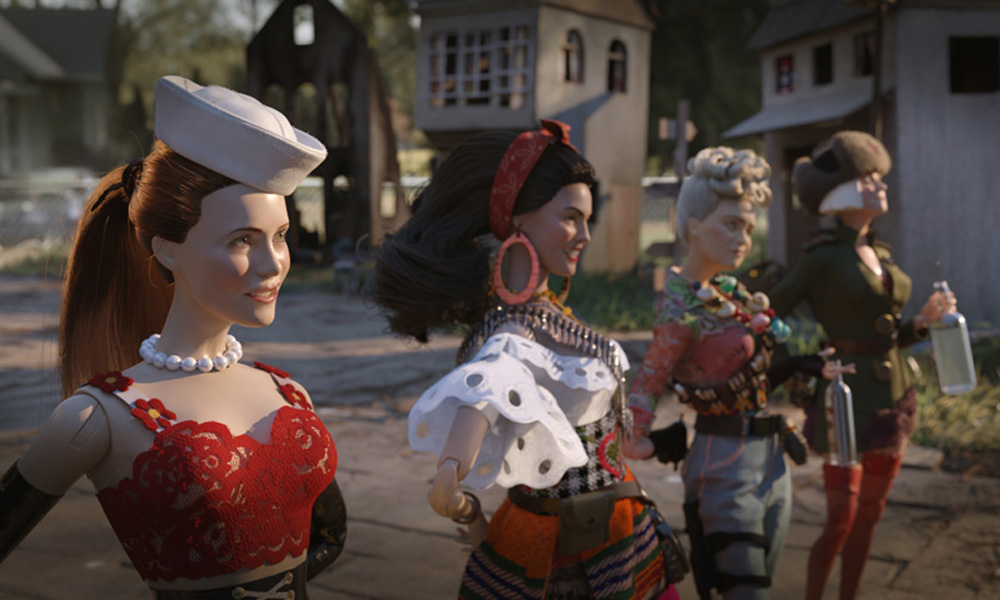 ‘Welcome to Marwen’: Building the Village of Living Dolls

A vicious attack outside of a bar resulted in Mark Hogancamp being in a coma for nine days, suffering from severe memory loss and having to learn how to eat, write and walk again. As a form of emotional and physical therapy, Hogancamp created and photographed a 1:6 scale World War II Belgian town in his backyard, christened Marwencol, populated by dolls representing various people in his life.

The inspirational story was the subject of the 2010 award-winning documentary Marwencol, and is now a feature film directed by Robert Zemeckis (Back to the Future, Who Framed Roger Rabbit). Contributing most of the vfx work for the project were Framestore, Atomic Fiction and Method Studios. Overseeing the visual effects in Welcome to Marwen was Kevin Baillie (The Walk), who was tasked with turning the main cast (Steve Carell, Leslie Mann, Merritt Wever, Janelle Monáe, Diane Kruger, Eiza González, Gwendoline Christie and Leslie Zemeckis) into living dolls.

“Bob is never one to rest on his laurels,” says Baillie, who first became involved with the project back in 2013. “He strives to push the envelope and to do something that is new and creative. This film was absolutely no exception! Welcome to Marwen is not a Toy Story rendition of what happened in real life. The level of humor is designed to echo what Mark Hogancamp goes through. Mark has to make it a little bit funny, otherwise, he’s going to be wallowing in his sadness in perpetuity, but it can’t be so funny as to make it not serious. Steve Carell, Bob Zemeckis and the whole cast did an amazing job of riding that line.”

Two elements were critical to Zemeckis: One was having the performances of the actors come through without any loss of fidelity — especially in their faces— and the other was maintaining the look, feel and lack of irony in Hogancamp’s photography.

Welcome to the Dolls’ World

Initially, the plan was to build oversized sections of Marwen on a giant soundstage and digitally give the actors an action figure form. “A year before filming, we shot a test to prove this methodology, and it looked horrible,” recalls Baillie. “We went back to the drawing board and I showed Bob what a motion-capture version of the dolls would look like, and he reacted badly to that. The deadline to get this film greenlit was fast approaching. And then, an ‘Aha’ moment occurred. We decided to do a CG doll driven by mocap and augment it with parts from Steve Carell.”

The live-action performances needed to be integrated onto rigid plastic dolls. “It was all about getting rid of the detail that was too human, like fine wrinkles and imperfections, while keeping every subtly of the motion,” states Baillie. “What you see happening in the lips and eyes are a pixel to pixel representation of what the actor did transformed to the shape of a doll face.”

It was critical to make sure that the camera angles and lighting on the mocap stage exactly matched what was in the virtual world of the dolls. “We gave cinematographer C. Kim Miles [The Flash] a bunch of real-time tools to pre-light the entire movie before we ever shot a frame of it. One monitor on the mocap stage had what our ALEXA 65 cameras were seeing and another one had the real-time view into this world where the dolls are prancing around in this beautifully lit setting. Bob and C.K. could compare the two to make sure that there was a good match so we could proceed.”

Emulating the photography captured by Hogancamp required having a shallow depth of field for the doll scenes. “We had to develop custom workflows such as using digital tilt-shift lenses to make sure that two actors offset from each other were both in focus,” explains Baillie. “Now we’re pulling in old-school photography techniques into the digital filmmaking process. Then we also developed a custom diopter by drawing a curtain in a shot. Wherever that curtain is in depth is what’s in focus in the shot. We could have a group of girls standing in this big U shape in front of us with every single one of them in focus but still retain this shallow depth of field that was critical in maintaining an authentic photographic look.”

The team used Katana and RenderMan to render the shots. “All of the depth of field was rendered in-camera in RenderMan,” says Baillie. “That decision was made to make sure that we were correctly setting focus and animating properly.”

Creation of the practical dolls began with the visual effects department. “We would scan our cast and do a paint over on a photograph of each actor,” reveals Baillie. “Makeup designer Bill Corso [A Series of Unfortunate Events] worked with our hair [Anne Morgan] and makeup [Ve Neill] designers to create an image of what this doll should look like. Visual effects artists would sculpt this heroized doll version of every actor by giving them smaller noses or sharper chins. Bob would approve the 3D model that was then sent to miniatures effects supervisor Dave Asling [I, Robot]; he and his team would 3D print these dolls, and hand paint the face and head. For characters who had hair they would plug in four hair strands at a time to produce these beautiful hand manufactured dolls. Those physical dolls that you see in the movie matched the digital versions exactly because they were born out of the same DNA.”

Building the town of Marwen and its supporting environments had its own share of challenges. “Once the film got greenlit, production designer Stefan Dechant [Kong: Skull Island] came onboard and took that work we had done and made it 100 times better,” remarks Baillie. “He was careful not to micromanage the miniature makers who physically built the town on Dave Asling’s team because all of the knick-knacks that they brought to the table didn’t necessarily exist in World War II Belgium. No one has an Oldsmobile in Belgium, but that’s a car emblem that Mark Hogancamp has on his wall. Once they were done building, we scanned and photographed the living daylights out of these models. When you’re in Mark’s imagination, what you see is a village that is based on the actual physical model, down to where the paint is peeling off of the walls of the church.”

Marwen itself was built in the middle of a little neighborhood. “We spent three days shooting plates of the surroundings at different times of day and various angles,” states Baillie. “We came back to a soundstage, rebuilt Mark’s trailer and the town with a grass patch surrounding it, and bluescreen for the scenes where the life-size Mark Hogancamp and his friends are talking. The plates were used for a 3D creation of the whole environment surrounding Marwen.”

Every shot has dust particles floating in and out of the light and pollen in the outdoor scenes. “It doesn’t steal the show but is critical to giving a volume to this world,” says Baillie. We developed a special suite of tools to help our compositors do that work without having to go to other departments. This show didn’t have a giant budget so we had to get crafty shortening feedback loops.”

For the vfx supervisor, two scenes stand out near the end of the film. One is the final battle scene which features all the characters and Hogie flying a LEGO Delorean to save the day. The other finds Hogie feeling devastated and about to lose all hope. Baillie explains, “I am excited for people to experience that scene: The performance Steve delivers is so subtle and emotional that I found myself forgetting I was watching dolls.”

Universal’s Welcome to Marwen is currently playing in theaters nationwide.