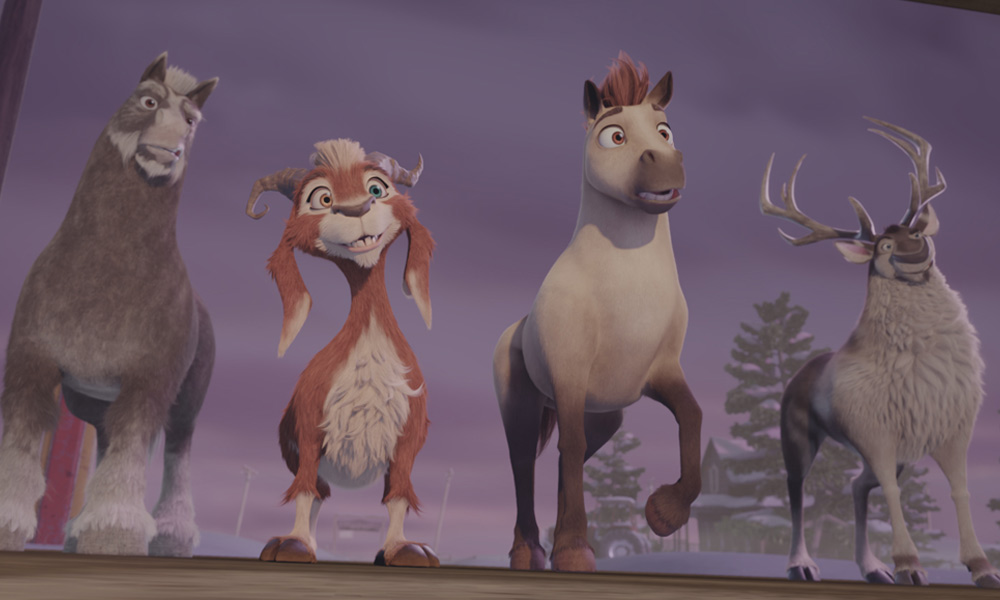 Step Aside, Rudolph! ‘Elliot: The Littlest Reindeer’ Soars with Santa This Week

***This article originally appeared in the January ‘19 issue of Animation Magazine (No .286)***

You know it’s December when we begin to see a multitude of projects about flying reindeer other animals helping Santa on TV and movie theaters. The new animated feature Elliot: The Littlest the Reindeer is the latest spin on the seasonal favorite. The feature, produced by Awesometown Entertainment in association with Elgin Road Productions and distributed by Screen Media Films, follows the adventures of a miniature horse who gets the chance to pull Santa’s sleigh when Blitzen announces his retirement! The holiday pic’s impressive voice cast includes Josh Hutcherson  as Elliot, Samantha Bee as Hazel the goat, John Cleese, Martin Short, Jeff Dunham and Morena Baccarin.

The CG-animated pic, which is written and directed by Jennifer Westcott and produced by Lucas Lynette-Krech, is playing in select theaters this month. We had a chance to chat with Westcott about her new project, which follows in the footsteps of some of the most beloved animated holiday classics of all time.

Westcott says she wrote the script after seeing a miniature horse auction in Fort Worth, Texas. “I didn’t even know miniature horses were a thing before then and kind of fell in love with the little weirdos,” she recalls. “That initial draft won a Praxis screenwriting fellowship (a big screenwriting contest in Canada) and I spent the next seven years slowly rewriting it while working on other projects.”

After forming a production company with her sister, Victoria, Westcott crowdfunded her first indie live-action feature, and decided to try a more traditional route and see if she could get any traction on Elliot. So, they pitched it to several animation studios, and then went with Dan Krech and Lucas Lynette-Krech at Awesometown Entertainment (Tabaluga, The Happy Elf, Lost Amazon), and the rest is Santa’s helpers history.

“The story of a miniature horse who is constantly underestimated, but nevertheless goes on to chase this enormous, seemingly impossible dream just really resonated with me,” says Westcott. “I worked on the script for many years, and it feels as relevant now as it did when I first started it back in 2007. It’s a Christmas movie, obviously, but it feels like more than a Christmas movie to me, with its emphasis on friendship and overcoming one’s fears and defying familial expectations.”

North Pole in the Dark

Westcott says she loves the film’s lush visuals and gives credit to production designer Naeim Khavari and his team for their outstanding work. “From the characters to the sets to the background paintings, they really put so much thought and heart into every detail,” she says. “We worked really hard to juxtapose the two worlds of the film, keeping things simple and wide open in the real world of the farm, while the magical world of the North Pole has a much more cozy, contained kind of feel. Another thing that we were determined to do from the beginning was show the North Pole as it really is in December: in 24-hour darkness. That constant cover of darkness allowed us to create a really warm, intimate feeling in what would otherwise be a pretty cold environment.”

The animation was produced at Toronto- and Hamilton-based Awesometown Entertainment, under the supervision of animation director Sean Coghlin. The artists used Maya and RenderMan to deliver the film’s impressive CG animation. “Over 300 people worked on the movie, which I guess is a small number in the animation world,” says Westcott. “But to me, coming from the world of indie live action, where I’m used to working with crews of like eight, this seems like simply an enormous amount of people! It’s kind of mind-blowing to think that so many people went on this journey with us.”

Going from a live-action environment to CG animation had its share of challenges. “The learning curve was steep,” says Wescott. “First of all, everything that you see in an animated film needs to be designed and created. As someone who had never worked in animation before, it’s hard to overestimate just how big of a concept that was to get my head around.”

Wescott says she also had to learn the crucial importance of storyboards. “The edit is more or less done before you even speak to your actors,” she notes. “Getting your storyboards right is so, so, so important because there is very little room for error and/or indecision once you get to a certain point in production. There’s no falling back on coverage like you can in live action, because there is no coverage. There’s the medium shot that you boarded and sent through layout and has now been animated. If you want to change that shot, it’s going to take time and cost money. So, ideally, you need to get it right, right from the beginning.”

Looking back, Wescott says she’s proud of many aspects of Elliot. “Well, it’s about a miniature horse, so there’s that!” she laughs. “But it’s a sports movie, first and foremost, so that’s what makes it stand out from your standard Christmas fare. Plus, we’ve given the reindeer more of an inner life than typically depicted on screen — they’re not just big jerks or totally sugar-sweet cutouts. All of the characters are more three dimensional, more real than what we’re used to seeing a lot of the time.”

When asked what she loves about working in animation, Wescott says it’s the same thing she loves about her career in live action. “Working with amazingly talented, hilarious, wonderful people toward a common artistic goal, of course. Animation just takes longer! There’s really no better job in the world—and I’ve had a lot of jobs, trust me!”

Growing up, Westcott was all about watching Tom and Jerry cartoons on TV.

“That was until I was about 11. Then, it was basically all Jem, all the time, mostly thanks to my sister who was crazy for that show. And of course every Canadian child has an enduring love for The Raccoons. Curse you, Cyril Sneer! As for movies, my favorites were The Rescuers and The Secret of N.I.M.H. Now I have kids so I watch pretty much whatever they’re into — we’re currently big on Gravity Falls and Teen Titans Go!, which are both just so funny. And of course, I’m in awe of everything Pixar puts out — they are just at the top of their game, in all aspects of filmmaking, all the time. Just the best. How lucky we all are to be able to witness it.”

Now that Elliot is out of the barn, Wescott is working on a few more animated scripts. “I’m working on one solo and one I’m writing with a partner (Brittney Wilson.),” she says. “Then my sister and I have a TV docu-series we’re working on getting set up. It’s about wine, so naturally that’s the one I’m gunning for — I kid, I kid. I love all my babies equally! And we’ve got a live-action feature horror that I’ve been rewriting for about 10 years. Someday, I will eventually get that script right!”

Being the kind of helpful, optimistic director she is, Westcott leaves us with a few essential words of advice for future animation directors and producers. Channeling Elliot, she notes, “Write things. Direct things. Read things. Watch things. Get used to rejection because you will almost always be rejected… until one magical day you aren’t, and then, you’ll realize all that rejection was actually preparation. Be nice. Be collaborative. Go to conferences. Talk to people. Listen to people. Make friends. Have fun. Don’t quit!”

Elliot: The Littlest Reindeer screens in select theaters starting Friday, November 30. You can find out more about the movie at www.awesometownent.ca.